One of the benefits of staying with a Khmer family whilst visiting Cambodia is that one gets to indulge in some of the more traditional Khmer customs that the average western traveller might not have the chance to experience. Sure anyone can just rock up to some public waterfalls and try and awkwardly blend in with the local families and such but on our final night in Sihanoukville we were invited along with Papa Politz and family to a local housewarming/children’s birthday party.
I had plenty of experience perfecting the art of good house party banter at university and I love jelly and ice-cream, so this was a win/win situation. Cambodian housewarming parties are very similar to British housewarming parties however in Cambodia instead of spending the day chilling vodka jelly shots and setting up beer pong tables, a small troupe of monks turn up to bless the house and no doubt eat some of the food that isn’t theirs – much more civilised. That besides the similarities are uncanny. The groups of men gathered around the patio and drank beer straight from the can whilst verbally sparing over who caught the biggest fish last weekend. The children were sectioned off in their own little room filled with enough bright colours, fizzy pop and sweets to induce an epileptic fit and the mother hens clucked around in their high-heels and $1 earrings gossiping, moaning and doing whatever women do at house parties – as a male I am usually situated in the kitchen or in this case on the patio and so not privy to such information. 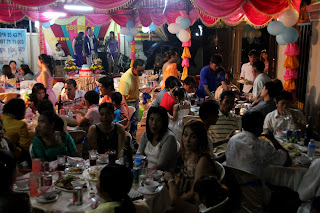 There are a list of things one could and should expect at a house party/warming regardless of which nation is playing host. All good house parties should have a bountiful array of finger foods and cold beverages. There should be at least one surprise hook-up for everyone to gossip over in the morning. Someone should be sick in a shoe. Someone should fall off their chair (in this case my Dad) and finally, every house party should come with its own German reality TV show family. Now I realise the last one is a little bit specialist but that’s what we were presented with during the flurry of ‘hellos’ and introductions we were bamboozled with when we arrived.

The first giveaway that this fella was being filmed was the small microphone that he had clipped to his shirt. The second was the 3-person camera crew which were trying to look inconspicuous amongst a predominantly all-Asian crowd following the spritely bloke and his family around.

I should tell you at this point that I am terrible at remembering names and despite this bloke being some kind of low-brow German reality TV star he was not exempt from my short term memory loss.

“I hope you don’t mind I am being filmed for a TV show back home in Germany, what is your name?”

He spoke great English in a very typical German accent, think more Eurotrash than Hans Grueber of Die Hard notoriety. He was a short, slight man with thinning hair who resembled Theo Paphitis without the money. I introduced myself and Sara as my new wife (which I’m getting much better at) and proceeded to exchange pleasantries. All the while having my under carriage tickled by an inexperienced boom operator and my vision impaired by an intrusive hothead light on top of an ancient looking camera.

After our brief introduction, which I’m pretty sure I did twice due to the camera not being present the first time, the jolly German went on to explain what he was doing in Cambodia, which as it turns out was also the synopsis for the show he was making.

“I am a German who moved to Cambodia and now they film my story.”

This was all well and good but I was only on my first beer and still a bit taken aback by this unexpected furore in the form of the German version of The Osbourne’s. He turned out to be an incredibly interesting gentleman with a nice wife and somewhat timid child. Unfortunately the experience was somewhat marred by a combination of my inability to hear exactly what he was saying coupled with my being too polite to ask him to repeat what he had just said.

Sara was paying attention and has done a stellar job reminding me that he was in fact in a similar situation to us; he had a means to earn money so long as he had his laptop and an internet connection and so instead of falling fowl to the rat race travelled the globe and played the stock market. To his absolute credit he carried a genuine zest for life and an enthusiasm that was probably wasted on me whilst I took in my new surroundings. Despite his eagerness to show off his German TV entourage this was simply a by-product of his journey and a small TV channel thought his story was worth telling back home. Inspired.

Part two of the night involved the birthday celebration of the couples darling little daughter who, like all children her age, looked fed-up and exhausted after having been paraded around by her parents all day under the false pretence that she was the star attraction only to be usurped by her mother singing ‘Unchained Melody’ just moments after cutting the birthday cake. Despite the growing tiredness of the bewildered young tot as her Mother belted out a rendition that made Robson & Jerome sound like The Beatles a fun night was had by all. 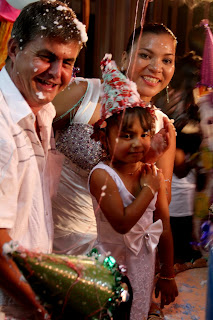 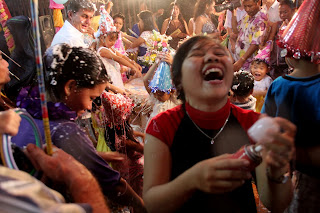 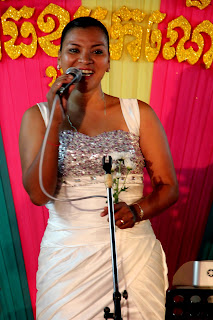 After a 3-course Khmer banquet was served tables and chairs were hurriedly packed away as the females took centre stage and entertained the remaining crowd with some traditional Khmer dancing and to bring us all back to reality Dad fell backwards off of his chair into a bush. On that note and having made enough of a parade out of ourselves we made swift exit and had an early night ahead of our trip to Kampot the following day.

Sara Damergi is a TV presenter, entrepreneur and globetrotter. TV clients include, MTV ,5IVE, Bravo, Sky and Channel 4. Sara also presented international extreme sports show, ''The Crunch'' filmed across China which was a prime-time success worldwide. Sara is of Lebanese and English descent and has always had a passion for new cultures and travel having lived in Beirut, Cyprus, London and in her clubbing heyday Ibiza, she is now indefinitely travelling the world funded from her internet businesses and blogging about it with her husband What Politz and Damage Did Next.
Read More Share
Moscow TechCrunch Meet Up on December 13
The Magic of Ireland’s Glendalough