”GET YOUR BAG AND RUN SARA.” I looked up at Rick from the safety of my mosquito net/ bed fortress and knew just knew we had to face a dark threat head on. Yes comrades, a spade-sized spider had invaded our tree house territory and was blinking at us from a fold in the flimsy curtain. In a ridiculous Benny Hill speed fashion I packed my things and did as I was told, I RAN.

We clambered across the bamboo bridge to reach the safety of our travellers hang out bar area. The other guys asked if we were leaving… ‘Erm no.’ I said sheepishly clutching one shoe and a rucksack. I’m sure the Aussies had a right old laugh at the two pommes who were scared of spiders. In fact one Oz went into our room only to declare, ”Ahhh it’s a tiny little thing mate!” 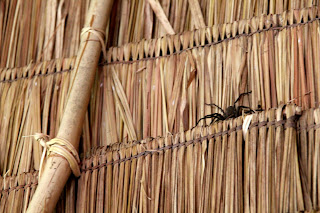 Despite the spider invasion Bodhi Villa in Kampot was a really atmospheric little place. It is so incredible to wake up to a sunrise over a still river and jump into the cool waters for a refreshing swim> Bodhi Villa is full of travellers from all over the world exchanging tips, playing back-gammon and hanging out in the bamboo bar overlooking the river. One proud traveller announced she had got malaria six times, watched people die of potato vodka poisoning in remote Russia and let leeches fall off her legs when they got full. We have aallllllllll of that to look forward to. Amazing… 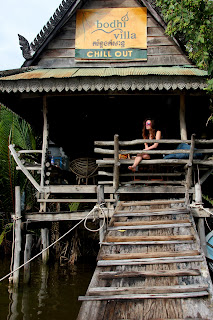 Kampot itself is a really pretty little town, although it is small and there is not that much around we really enjoyed it. A lot of community projects are thankfully going on in Cambodia. Orphans are being trained with useful skills and being looked after in brand new orphanages which we saw when we stumbled into one by accident in Siem Reap.

HIV centres are being set up so hopefully more medication will be available to the Khmer people soon and there are lots of westerners that have set up businesses to help less fortunate have a better life. One of these businesses was The Epic Cafe in Kampot. It is run and staffed by the deaf community in the Kampot area. It is probably the best cafe/restaurant I have been to in Cambodia, amazing food with chocolate chip cookies and scones the size of your head and they are the most attentive lovely staff! 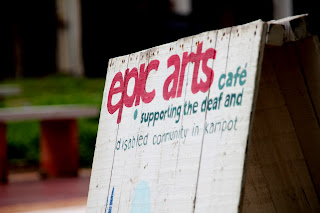 We spent an incredible few days in Kampot but I was desperate for some beach action so we got a tuk-tuk to drive us to Kep. A 45 minute open air drive where we got to see some inspiring sites in rural Cambodia. Before arriving at our amazing new jungle home in the form of Jasmine Valley Eco-Resort which is tucked away up a rather inhospitable dirt track and nestled below the national park right in the jungle. We are currently sharing said jungle with killer caterpillars.

Sara Damergi is a TV presenter, entrepreneur and globetrotter. TV clients include, MTV ,5IVE, Bravo, Sky and Channel 4. Sara also presented international extreme sports show, ''The Crunch'' filmed across China which was a prime-time success worldwide. Sara is of Lebanese and English descent and has always had a passion for new cultures and travel having lived in Beirut, Cyprus, London and in her clubbing heyday Ibiza, she is now indefinitely travelling the world funded from her internet businesses and blogging about it with her husband What Politz and Damage Did Next.
Read More Share
#ChristmasMusic – Dec. 10 – Lucia Hits Stockholm
Liberty Carousel at Night