It was always going to take something special for us to leave the idyllic surroundings of Jasmine Valley but after nearly a week of basking in its natural beauty, bathing in its rain water pool and eating some of the finest food we had come across since arriving in Cambodia one half of that special something hobbled and limped down the awkward steps of the 9:30am bus from Phnom Penn to Kep along with the other, some would say better half, who greeted us with her ever-present smile and the remaining luggage from the coach. Auroraman and Cupcake Woman had arrived.

Better known as Raman Mohial and Standish Millennas our two fellow Brits from back home have been globetrotting for the past couple of months en route to New Zealand where they plan to settle for a year and forge a new existence for themselves. If you like music and eating delicious homemade cupcakes then these two lovable beings would be your ‘cup o tea’. Ram is an incredibly talented songwriter and guitar aficionado and Stannie, as she is affectionately known to her friends, bakes a custom cupcake like nobody’s business.

Their trip thus far had been marred with bad weather and Ram’s incessant need to seek out the local wildlife in the form of some reef sharks whilst snorkelling in Koh Tao. His curiosity lead him from the beautiful islands on Thailand’s coast all the way back to Bangkok via a couple of broken toes and minus a toenail after a freak accident, during which I hasten to add no sharks were involved. After a week or so Raman, fully equipped with some Thai standard issue crutches was given the all clear to fly. A mere 48 hours later we were reunited with our good friends and made haste towards Rabbit Island.

Rabbit Island as described in many travel books is the epitome of rustic. Not the kind of ‘rustic’ you might expect when you are referring to a Jamie Oliver recipe where he takes a basket full of over-priced organic ingredients and whacks them in a bowl with a load of balsamic vinegar and serves them in a roasting tray. It’s the kind of rustic that when you arrive via the short 20-minute boat ride you have to spend at least another 30-minutes performing a reccé on the various beach-front bungalows explaining that by ‘bed’ you didn’t mean ‘mattress on the floor’ and by ‘shower’ you didn’t mean ‘bucket and cup’.

Electricity runs for only 4-hours a day via a generator which is fired up at 6pm and you might question if the chicken noodles you just ate was minutes earlier scurrying around your feet henpecking your ankles. That’s not to say one should avoid Rabbit Island, or Koh Tonsay as the locals know it, we spent the most outrageously relaxed 3 days frolicking (we’re British, we’re abroad, we frolicked) in the clear oceans, loafing in hammocks and eating seafood so fresh that when you order crab your waiter swiftly strips from his uniform and fetches your dinner from a nearby cage a couple of feet into the sea – like a sort of gastro-Chippendale. 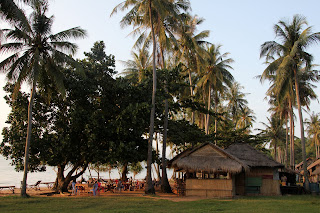 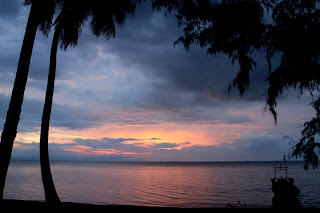 Short of maybe 30 bungalows – and I use the term bungalow in the literal sense of single level structure, four walls and a roof if you will, there are 4 bars and small shop which sells chocolate for any westerner having withdrawal symptoms. It was the perfect setting for what would turn out to be an all too short reunion with our already missed friends.

I have no doubt they will find happiness wherever they lay their hats and I’m sure Auckland will provide the perfect backdrop as they embark on the next step of their exciting adventure. If would like to catch up on their travels and read all about the completely non-shark related snorkelling incident without my sardonic twist on events please do check out their blog at http://auroraman.cupcakewoman.co.uk/

After saying our goodbyes we made our way back to Sihanoukville to pick up our visas for Vietnam and go through the turmolous task of saying even more farewells to our family. Try as I might I cannot put into words just how nice it has been to spend time with both Dad and our extended Khmer family.

Having been years since we last spent any time together despite frequent emails and pixelated Skype chats it’s so pleasing to see that Papa Politz still has his zest for life, wry sense of humour and no idea on how to act appropriately in any number of social situations which if you have spent any time in my company will know has been dutifully passed down to me. Cambodia made such an impression on us we have already made plans to visit again in March of the New Year – that’s if we decide not to return sooner. 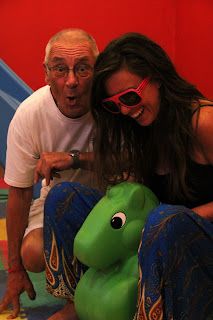 I believe this was taken whilst Dad offered some advice on how to deal with PMS. Brilliant

Having been away for just over one month now not only has it become harder to envision a life back in London but we are also taking on the guise of real backpackers – you can tell from the our stringy hair, faint musk and… Err… rather large backpacks. We have also started our very own travellers trail. We met people in one place who we then saw in another or have since heard tales of recently departed acquaintances on the road to the unknown.

It started around Bodhi Villa in Kep where one of the staff members noticed a picture of Sam, my Dads wife, on our computer. He explained he knew Sam from his days working in the supermarket in Sihanoukville. Whilst staying at Bodhi Villa we met a lovely young chap from Finland called Patrick. Days later following our reunion with Ram and Stannie we also saw Patrick on the very same bus on his way to Rabbit Island where he joined the four of us most evenings for dinner and tried teaching us some rather questionable Finnish card games.

From there Ram and Stannie made their way with Patrick to back to Bodhi Villa in Kep where Ram made an incredible showing for himself in front of his first international audience at open mic night. The following morning whilst on a bus to Vietnam we overheard a group who were travelling to Saigon tell of the legend of the one legged guitarist who played at Bodhi on the previous night. Sure enough after enquiring the group were talking about our very own Auroraman.

So long gone are the happy, cheery Khmer people as we crossed the land border of Xa Xia where we were greeted by the distinctly harder Vietnamese faces. I’m not saying that the Vietnamese people aren’t as nice as the inhabitants of Cambodia but having spent a month walking the streets being waved and smiled at from windows, shops and buses we quickly realised that was not protocol in Vietnam. There’s nothing wrong with that necessarily, we just looked like two rather overenthusiastic maroons crossing the border all ‘smiles and waves’.

The best I can tell the Vietnamese simply don’t conduct themselves like that, which is fair enough because I’m yet to encounter a country so accepting and friendly of foreign visitors as Cambodia and most likely never will. 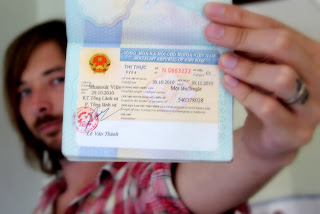 Our plan for the short term was the head to Phu Quoc Island just off the south coast of Vietnam however I had the fantastic idea of spending a night in the border town of Ha Tien before we set off the following day.

On reflection that’s a bit like saying, ‘I know, we’ll holiday in St Tropez but before we go there let’s check out the B&B’s at Calais.’ Stupid. The Lonely Planet said that when they visited the hotel we were staying in it was in the middle of a building site but once finished would be beautiful. Unfortunately that particular print of The Lonely Planet must have been issued last week because the entire place looked like, well, a building site. Without even being offered a high-vis jacket or hard hat we had promptly booked our boat to neighbouring Phu Quoc Island where we have spent the last week in the ritualistic pattern of waking up, going to the beach, eating and promptly falling asleep.

The island is a complete contrast to Koh Tonsay which you could walk the parameter of in roughly 3 hours. Phu Quoc has its own domestic airport, miles and miles of unspoilt stretches of beach, small islands which play home to giant sea turtles as well as numerous other exotic marine life and restaurants and beach shacks catering for the large influx of French and German clientele who insist on wearing outrageously small Speedos whilst lining the beach. What was initially intended to be a brief stop off before embarking on the industrial jungle of Ho Chi Min City has turned into a 2 week vacation from our indefinite honeymoon holiday proving that laziness truly does breed inactivity.

Sara Damergi is a TV presenter, entrepreneur and globetrotter. TV clients include, MTV ,5IVE, Bravo, Sky and Channel 4. Sara also presented international extreme sports show, ''The Crunch'' filmed across China which was a prime-time success worldwide. Sara is of Lebanese and English descent and has always had a passion for new cultures and travel having lived in Beirut, Cyprus, London and in her clubbing heyday Ibiza, she is now indefinitely travelling the world funded from her internet businesses and blogging about it with her husband What Politz and Damage Did Next.
Read More Share
Cambodia to Thailand: Feeding a Baby Elephant During Dinner
Putting on the Ritz and Bio Bay in San Juan