Angkor Wat is looked upon by many, particularly the people of Cambodia, as the 8th Wonder of the World. A fictional term used by some to compare something ‘wonderous’ to the 7 ACTUAL wonders of the world. This title was previously held by the late, great WWF Superstar Andre the Giant but since his passing Angkor has been plucked from its Vauxhall Conference like status and thrust into the size 13 boots left by Andre’s absence.
I have no idea how or why a professional wrestler took precedence over ‘the most photographed religious landmark on the planet’ (Dad’s words, not mine) but when the league table of world wonders was devised if you ask me, Angkor Wat got a bit of bum deal. I suspect that being a Buddhist place of worship the other world wonders took advantage of Angkor’s passive nature.

The town of Angkor itself is strewn with temples and if you have a couple of days and enjoy intricate brickwork and overgrown tree roots then a visit to Siem Reap and indeed the small, neighbouring town of Angkor is a must.

As we approached the town of Angkor the lights of other like-minded tourists half asleep in their tuk-tuks and motos pierced the road en route. Fighting through yawns and still wiping the sleep from our eyes we ambled across the bridged moat and finally into the temple grounds just as the first rays of orange light broke through the clouds between the temples. We were joined by maybe 200 other sun-revellers which you might think takes the majesty away from such an event however there was a real sense of knowing, a sense that we were in this together. Yes, we were all tired! Yes, we were all groggy and grumpy and up until when the sun broke we couldn’t see the point in lieu of a few more precious hours in bed. But by Jove we’d all done it!

We were here and now we can cross this off our list of ‘Things I’ve Done Which I Find Incredibly Interesting but Those Who Haven’t Done Them Couldn’t Give a Toot’. You know the list, we all have one. It usually involves stories of travels and chance celebrity encounters. Or if you’re really lucky, chance celebrity encounters whilst on holiday. Like seeing Will Mellor off his face in Ibiza or something.

Angkor Wat at sunrise offers up a fantastic photographic opportunity as indicated by the many amateur photographers eagerly setting up tripods alongside a stretch of pond to the left of the landmark hoping to capture a holiday defining moment in time. However due to the early start I was nowhere near as alert as I would have liked during the brief 15 minute window of ‘good light’ which we experienced. Luckily Sara was and managed to compose some rather excellent shots before we retired to a nearby coffee stand for a much needed caffeine injection. 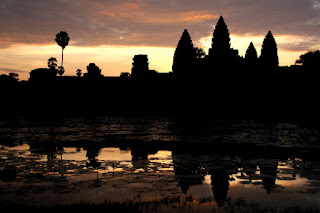 Once inside the temples we were presented with endless corridors and caverns, secret staircases which opened out into grass courtyards and huge stone outlines which framed the picturesque settings beyond. Effigies of Buddha and headless statues as a result of theft lined the halls and made for a fair few photo ops. After a few hours of walking and pointing and getting lost in the obligatory tourist manner we made our way out via a small orphanage which was celebrating the final day of the Pchum Ben festival.

As with most places in Cambodia the sight of a westerner immediately attracts attention and a smile, wave and an over the top, “Hellllloooooooo!” goes a long way. The families and their children seemed thrilled that us dozy old English folk had inadvertently stumbled upon their day of worship and welcomed us in. We gave a donation and Sara said a small prayer, I suspect something along the lines of, “Please don’t let my bastard husband wake me at 4am again so he can take pictures of a sunrise.”

Whilst Sara was busy snapping away and praying and generally doing a very good job of fitting in. I on the other hand was stood nervously beside her with my hands behind my back with a rather apologetic look on my face as if to say, ‘I’m terribly sorry for this awful intrusion! We’ll just do a quick pray and be out of your hair in a jiffy!’ Of course Monks don’t have hair which became very apparent when I locked eyes with an elder from across the room. Her face worn with character, her blue eyes riddled with glaucoma seemed almost magical and her smile stained blood-red with malousla as she beckoned me over.

Now, I have never been ‘beckoned’ by any kind of religious character and for some reason the idea of a monk calling me over filled me with dread and terror.

“Sara…! SARA!” I called from the corner of my mouth.

She couldn’t hear me over the music and prayers.

“Sara! The monk is looking at me!”

It’s well known I’m not religiously inclined however I do know it’s good practise to never keep a monk waiting. That said I nervously shuffled over and presented my sweaty, beardy, tattoo-y self to the bewitching old lass.

Nothing. The monk smiled and took my hands in hers as she bowed her head and spoke in tongue which was an odd experience but an interesting one no less. She grabbed my arms and started pointing to the many tattoos which adorned my arms. ‘Brilliant’, I thought. ‘I travel to the other side of the world and STILL get a hard time from the OAP’s about bloody tattoos!’ On closer inspection it seemed the monk was only interested in one piece of body art in the shape of the heart locket on my left elbow. Now, listen here reader, I am not doubting for one second that the entire experience, although not wasted, was completely lost in translation and for all I know that monk could have been damning me to hell (or reincarnated as a toilet seat in the eyes of Buddha) for scarring my body with needlework.

But could it be possible to suspend belief for just a little bit and embrace the thought that she acknowledged the heart as a symbol of love, purity and all that is good? That despite cultural, age and religious differences we had both come together for to acknowledge and share the embodiment of the human spirit. Maybe. Or maybe she was pointing out that the red could do with going over again as the colour has faded since the tattoo fully healed. Either way, it turned a rather tiresome morning into a very rewarding experience. The inspiring events of the morning put us in great stead for the rest of the day and indeed our visits to Ta Prohm (the one with the tree roots) and Bayon (the one with the stone faces). Pleasantly, both were completely different visually. Ta Prohm being an old relic of a temple, the grounds filled with rubble and littered with scaffolding as the never ending job of restoration continues. The infamous overgrown tree roots which define the temple are more than likely its undoing too as the trees weave in and out of brickwork and unknowingly crumble the structures over hundreds of years. 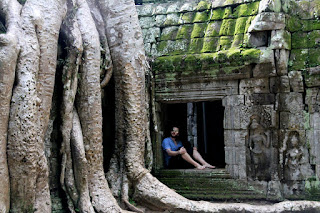 Bayon whilst just as derelict as Ta Prohm is a true testament to the ego of a fallen empire. The multi-levelled temple, by far the most aesthetically pleasing of the three we visited, is carved out of stone faces of the past rulers of Cambodia. Luckily the rulers of Cambodia back in t’day were rather handsome and the temple doesn’t suffer from being carved out of the bloated, rubber necked leaders we are used the back in Blighty. 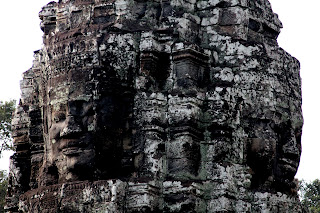 The Many Faces of Bayon
Rick Politz and Sara Damergi

Sara Damergi is a TV presenter, entrepreneur and globetrotter. TV clients include, MTV ,5IVE, Bravo, Sky and Channel 4. Sara also presented international extreme sports show, ''The Crunch'' filmed across China which was a prime-time success worldwide. Sara is of Lebanese and English descent and has always had a passion for new cultures and travel having lived in Beirut, Cyprus, London and in her clubbing heyday Ibiza, she is now indefinitely travelling the world funded from her internet businesses and blogging about it with her husband What Politz and Damage Did Next.
Read More Share
Woman Sentenced to Death in Pakistan for Defaming Prophet
Are Some of Us Meant to Wander?