Using public transport is familiar territory for me. However when back home in ol’ Blighty certain conditions need to be met to keep the experience as trauma free as possible. Rule 1. Never sit down opposite someone on the tube unless you have an iPod or book to distract you from potentially making eye-contact. Rule 2. Never take more than one ‘carry-on’ sized bag lest you spent the next thirty minutes apologising to your fellow commuters as you awkwardly shamble down the carriage to that elusive last seat. Finally, Rule 3. NEVER under any circumstances press the button by the door when the tube arrives. Everyone knows this is a cruel test implemented by Transport for London to weed out any ‘Tube Novice’s’ whilst heavy users smirk from behind their copy of The Metro. We had travelled to the other side of the world to get away from this kind of snobbish attitude only for it to thrust right back in our faces like a rotten tomato in a Vaudeville act.

“That’s EXACTLY what is was like my darling girl.”

We are leaving ‘Snooky’, as Dad affectionately calls it, for a week or so and so left our rucksacks there (see Rule 2) whilst we made our way to the north of Cambodia to see what visual delights await us.After a relatively stress free bus ride (see Rule 1) we arrived at our first stop en route to Siem Reap, the capital city of Phnom Penn.

A million miles (not literally) from the laid back, beach life of Southern Cambodia, Phnom Penn is a busy city riddled with motos, tuk-tuk’s and pedestrians. Its shopping centre dwarfs the likes of Lakeside boasting 6 floors chock full of anything you might need. Clothes, shoes, jewellery, TV’s, fake DVDs – it is the most official looking flea market I have ever seen. I bought myself a genuine pair of fake Ray Ban sunglasses for a mere $3 and some genuinely shocking fake Cambodian KFC (don’t worry Colonel, your secret recipe is still very much a secret in these waters) whilst Sara indulged her inner hippy and purchased some rather fetching purple maternity trousers. Although she assures me these are for protection against mosquito bites and that she’s not harbouring a secret child.

Safe in the knowledge that we would have to pass back through Phnom Penn on our way back down to Sihanoukville we stayed only one night before heading to the chaos that is Phnom Penn bus station the following morning. Imagine, if you will, a small car park. The car park can fit no more than say, 50 cars. Then imagine filling that little car park up with around 500 impatient commuters and 20 – count them! 20 full size hybrid bus/coaches coming and a-going at any one time. You know, the type of bus/coach you used to go on school field trips on – them.

Fortunately there were no ‘trick buttons’ on the outside of these coaches (see Rule 3) however with no discernible markings, at least to the English eye, so began the next 30 minutes of waiting. Every time a new bus came in we navigated the crowd, all of whom had no doubt identified us as complete travel ‘noobs’ and were probably texting their friends telling them about how there were a couple of useless westerners wandering around all squinty-eyed trying to make end nor tail of the markings adorned on the front of our carriage.

“Errrrrmmmm… ‘Scuse me… Does THIS bus go to Sie…”

Eventually, and with the help of a nice French lad and his missus who spoke Khmer, we did find our bus to Siem Reap. It was over booked by around 10 people, all of whom refused to budge once they had boarded. A little bit of me thought, ‘Yeah! Why should these people get off and have to wait another 15-minutes because the greedy bus company booked too many seats?! Let’s force this third-world, national bus service to ride with passengers on the roof and hanging from the windows like in Mad Max!’ Then after sitting there for over an hour listening to an argument in a language I couldn’t understand I thought, ‘Fuck the travel revolution, let’s get a move on, we’re late.’ Which eventually we did.

This particular bus journey was significant for a number of reasons not least because Sara watched the episode of 24 (see Rule 1) where Nina betrays Jack but because during one of our allotted toilet stops I had my first encounter with a legend in Khmer cuisine, the dreaded fried spider.

You don’t have to know me too well to know that I am absolutely terrified of spiders. When people come back from their holidays or are recalling a particular highlight from their travels, conversations usually occur thusly;

Person: Oh, I spent a bit of time in [insert exotic location]…

Rick: Oh really? [Pause] What are the spiders like there then?

Depending on the answer I usually launch into a cavalcade of questions about climate, potential encounters, ‘Was there one near the toilet like in that film Arachnophobia?’ ‘Is it true that some spiders in that region are so hairy they ACTUALLY shave?’ Which ultimately results in my black listing a country from my list of places I’d like to visit – I’m looking at you Australia. So, naturally when my Dad said he was moving to a country outside of the United Kingdom my first instinct was to enquire as to the arachnid population of said country. He still maintains that he is yet to encounter a single spider in his near 10-year stint in South-East Asia (fucking liar!) but I had evidence to the contrary. The local delicacy of Fried Spiders.

They’re such a fixture in my life, such an unnerving presence I’ve even capitalised their name like they are some kind of institution giving them undue grammatical importance over other words. Sara might have told you that I bravely disposed of a spider without crying when we first arrived at Dad’s. The truth is I took my shirt off, wound it up and whipped the little tinker into nothing more than a stain on the wall being sure to keep maximum distance between myself and the offending arachnid. If I tried to partake in a spot of gentle horseplay with the spiders in rural Cambodia they would more than likely retaliate producing multiple towels from their eight appendages and proceed to whip-crack me into next week.

Luckily for me these critters were very dead and very fried. (Although apparently there was a very real, very alive one in the cubicles Sara visited today.) At this point morbid curiosity had taken over me and I was floating around the stool like a fly to a fried spider. The infant manning the stool took a break from munching on crickets and scorpions and noticed my terrified little face working up the courage to take a photograph – you know, in case one wasn’t actually dead and jumped on my camera as I looked through the viewfinder. He offered me some of his fried goods but I respectfully declined, I had just eaten a whole apple to myself and was absolutely stuffed, otherwise of course I would have. He laughed at my cowardice and continued on with his lunch. 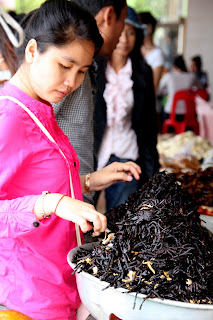 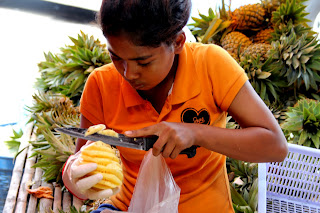 It took a lot but I bit the bullet and tried the pineapple. It was nice.
Back on the bus I thought about that little child’s smug laugh and once I had rationalised thoughts about wringing his haughty little neck felt incredibly disappointed in myself that I didn’t have a little nibble on a fried spider. After all, if I did, maybe word would spread amongst the spider community that Politz (-Damergi) the mighty spider eater cometh! And colonies of spiders everywhere would run away (as opposed to directly at me) at the mere mention of my name! Jeff Daniels and I could wage a two-man war on arachnids everywhere!
Quicker than I could regret saying it I had already mentioned to Sara that I was going to put it in writing that the next time I encounter the dreaded fried spider I would make a pledge to all of you to try it and to document it here. So at 5:30am (local time) and my fingers filled with regret here I am having finally worked up the courage.

Sara Damergi is a TV presenter, entrepreneur and globetrotter. TV clients include, MTV ,5IVE, Bravo, Sky and Channel 4. Sara also presented international extreme sports show, ''The Crunch'' filmed across China which was a prime-time success worldwide. Sara is of Lebanese and English descent and has always had a passion for new cultures and travel having lived in Beirut, Cyprus, London and in her clubbing heyday Ibiza, she is now indefinitely travelling the world funded from her internet businesses and blogging about it with her husband What Politz and Damage Did Next.
Read More Share
Politics, Morocco and Disputed Territories in the Western Sahara
Matt Venuti and Moses Sedler Create Magic Together