Papa Politz’s 67th Birthday. What an incredible day. I have been laughing my tits off at Ricks take on the Wat visit. Only Rick’s brain could take a beautiful spiritual Buddhist temple visit and turn it into a ‘’football hooligans are stealing our money visit’’.

Unbeknownst to my dear husband, we were also visiting the temple to bless his father on his birthday and even if he thought he was lighting some joss sticks ‘cos they ‘”smelt nice”. We were actually lighting them saying his father’s name and offering them to Buddha to bring him good karma. 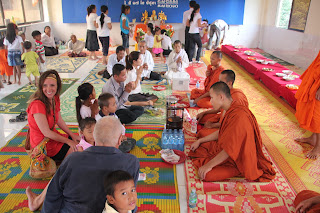 The festival of the ancestors or as the woman who runs a local travel agent translated ‘’the ghost party’’ is a real celebration, death isn’t feared here. Rather life is celebrated and anniversary parties for departed loved ones are held up until 10years after their death. Rick has some pretty strong views on religion, I however as much as I hate dogma, I think there are beautiful and magical elements in every religion and the Buddhist beliefs in compassion, the law of karma, reincarnation and so on, make for a serene and content way of life.

For anyone that has experienced the death of a close friend or family member will I’m sure appreciate how much easier to process it would be if you wholeheartedly had faith in all the above. Faith of any description is a pretty rare commodity in the West these days, some would say its evolution, some would say arrogance. I’m not sure which one it is but looking at life here and being privileged enough to stay with a Cambodian family and interact with the locals quite simply people are happier. So Maybe it’s a case of ignorance is bliss or maybe they have got it right, faith or no faith simply the rules by which they live by.

The old dears here who think they are past it rather than adopt a blue rinse set do and apply copious amounts of Rimmel coffee shimmer lippy abandon make up altogether , shave their head and eat a lot. Some women wait until they are widowed. (A wise choice methinks mind you bet the old blue pill isn’t readily available here so maybe they do all this when the old boy can’t get it up anymore. Too right, why bother if you aren’t getting any?)

I loved the waterfall we went to at lunchtime the kids loved it no lifeguards no safety barriers just people clambering through trees and splashing in the rapids and tiers of waterfalls, I loved being the only westerners there so much so I got a bit annoyed we weren’t the “only ones’’ when we went to Sihahoukville’s backpacker district Beach Road which is how I imagine Khao San Road in Thailand was 20 years ago before it became the utter mayhem it is now) Second hand Bookshops, travel shops, hostels, WI-FI cafes and of course it wouldn’t be proper backpacker land without Mick and Craig’s Sunday Roasts.(much to Ricks horror)

It was just off said Beach Road where Papa Politz’s rather rowdy birthday dinner was held. Someone thought silly string was a good idea. 3 hours later their ceiling was covered, someone behind us had a blue and pink ‘noodle’ in their cow soup and 2 very large jugs of beer had disappeared down the necks of both father and son. Suffice to say an amazing night had by all. P.S. after dinner we went down the local where we met a mad Frenchman in a woollen scarf and trilby who told me he got Arabs mixed up with Jews and tried to throw a cricket on our head.

Sara Damergi is a TV presenter, entrepreneur and globetrotter. TV clients include, MTV ,5IVE, Bravo, Sky and Channel 4. Sara also presented international extreme sports show, ''The Crunch'' filmed across China which was a prime-time success worldwide. Sara is of Lebanese and English descent and has always had a passion for new cultures and travel having lived in Beirut, Cyprus, London and in her clubbing heyday Ibiza, she is now indefinitely travelling the world funded from her internet businesses and blogging about it with her husband What Politz and Damage Did Next.
Read More Share
Mui Ne: A Mini Sahara in Vietnam
Bjorn Lomborg’s Skeptical Environmentalist