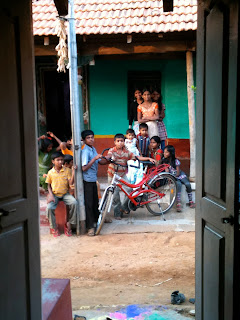 During Pongal, a festival of harvest celebrated over four days in January in conjunction with the solar calendar, cows across India are washed and painted, decorative chalk patterns painted in every driveway and families gathered to feast on seasonal dishes. Pujas are offered, animals blessed, and neighbors visited.

“It’s like Thanksgiving,” Anu, the much-love proprietress of a popular cafe in Gokulam, explained, ‘it’s about being grateful and sharing.” 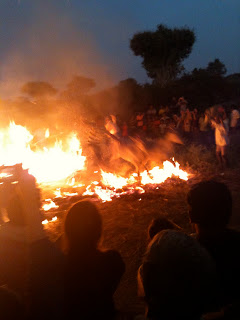 Anu was fairly spontaneously leading a group of Westerners to a small town, Vaddhara Hally, about 40 minutes drive from Mysore. While the city was full of painted cows and rangolis, we’d be able to see the most tradition Pongal celebrations in the small villages whose residents are more closely connected to agriculture. A day earlier she had met a village leader, a colleague of one of her friends who worked in Mysore, who welcomed us to join his village’s celebration.
The festival kicks off the beginning of Uttarayana, when the sun moves northward for an auspicious six month period, and the traditional farming season comes to a close.  As such, prayers are offered to the crops, and the third day of celebration, Manji Pongal, is dedicated giving thanks in particular to the cows and buffaloes who help tend them. Included on this day is ‘Manji Virattu,’ the tradition of washing and decorating the bulls then leading them to jump over fire.  This Indian-style ‘running of the bulls’ was what we were driving to Vaddhara Hally to see. But we got much more than that. 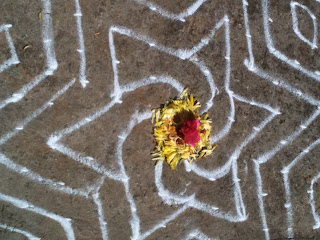 While we weren’t far from Mysore, Vaddhara Hally had perhaps never been set upon by 18 Westerners like this. As our cars drove into the town center where the cows were being readied seemingly every resident came out to look at us. They were the complete opposite of jaded. That is, we were immediately a source of interest, led through the rows of houses (made from stone and mud much like adobes of the Southwest) and followed closely by children. As word spread, more people came out of their homes.  A woman asked us to come in and we were given a tour of a clean and modest home where one room was given over to a sheep, and another room had a hole in its stone floor where seeds and masalas were ground.
We were then taken to the village leader’s home where we filled the living room and his wife served us lemonade, cookies, bananas and the small packets of a traditional mix of sweets, seeds and roasted legumes. Outside, a dozen children peered through the door waving. While seconds earlier, we were strangers, now we were honored guests.


By the time we finished our refreshments,  the cows were ready. Back at the village center, drums were sounding. A holy man performed pujas, blessing the cows, the jumpers, and us with flame and a sprinkling of water. Then we followed with most of the villagers as the herd of cows were paraded to the edge of town and the beginning of the fields. A fire of shrub and palm was lit in the road and fanned with more palm fronds. As the villagers cheered, the men began to run over the fire with their cows. Most were barefoot.
Even though we expected to see this,  it was truly an amazing spectacle. By the time the last cow had jumped (a few balked inconsolably at the fire’s edge), the sun had set. A girl gave us ashes from the fire so as to smudge our foreheads, another blessing. Then we and the rest of the villagers walked back and to many thank yous and hellos and goodbyes were waved back to Mysore.

Deborah's many performance credits include an appearance at the 2006 Millennium Music Conference, the RockerGirl Magazine Music Convention, IndieGrrl, at several of the Annual Invasion of the GoGirls at SXSW in Austin, TX, the Harmony Festival and 2009's California Music Fest, MacWorld 2010, Far West Fest and many other venues and events. She toured the Northwest as part "Indie Abundance Music, Money & Mindfulness" (2009) with two other Bay Area artists, and followed up with "The Great Idea Tour of the Southwest in March 2010 with Jean Mazzei.
Read More Share
Eat For Cheap: Tips For How To Spend Less On Food Abroad
Nat Geo’s Digital Nomad Speaks At Philadelphia Travel Show