Phillip Rosenberg wrote me regarding my thoughts on practice and music the same week I happened to be in Southern California. A songwriter who had spent time honing his craft in Nashville before moving to Joshua Tree, Phillip had recently began blogging about approaching song-making as one might approach their zafu or yoga mat, that is as a spiritual practice or ritual rather than something with a definitive endpoint.  We met up a couple days later at Kulak’s Woodshed for the weekly community open mic, where I heard a bit of his ‘Rags & Bones’ music live.  I found his literate songwriting to be grounded as much in the contemplative as everyday living and evocative of both Leonard Cohen and John Prine. He later expanded on his process with Bird in the Tree:
Q: How do you define practice? 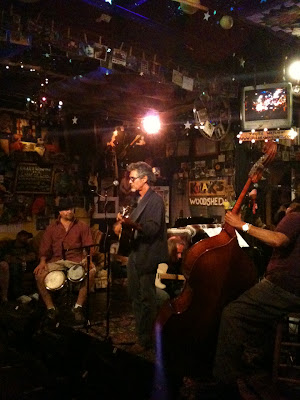 Deborah's many performance credits include an appearance at the 2006 Millennium Music Conference, the RockerGirl Magazine Music Convention, IndieGrrl, at several of the Annual Invasion of the GoGirls at SXSW in Austin, TX, the Harmony Festival and 2009's California Music Fest, MacWorld 2010, Far West Fest and many other venues and events. She toured the Northwest as part "Indie Abundance Music, Money & Mindfulness" (2009) with two other Bay Area artists, and followed up with "The Great Idea Tour of the Southwest in March 2010 with Jean Mazzei.
Read More Share
Nature Everywhere: Very Green, Very Verdant
Colombia’s Museo El Castillo – A Tragic Story