This is the mother of all blog posts. It’s our annual Top 10 list of Green Things for the year. It’s a way of celebrating all that 2010 has had to offer – from Saved T’s to Showercasts, Biodegradable tents to World Tap Water Week – we’ve had a spectacularly inspiring, inventive and creative year. Here’s a sampling of Green Thing’s 2010. Enjoy!

Flying halfway round the world to attend a meeting doesn’t sound like a good use of anyones time and energy, not to mention the horrific carbon cost. And in the age of video-conferencing, there isn’t even any need. Check out this Strange Meeting, starring Fay Ripley.

Over 1000 pairs sold to date, that’s more than 10,000 fingers kept warm, not to mention the thousands that have dodged their landfill fate and thousands more now that don’t need to be made. All you need is glove.

The problem: a massive amount of tent waste left in fields at the end of a festival. People turn up, buy a cheap tent, and leave it there. The solution: a tent that lasts three days then biodegrades, sowing the land with local seeds as it does so. A design masterpiece from Vanessa Harden.

Why take several minutes of song into the shower when you can take just one? To save on water by keeping the singing short, you’ll need some inspiration. Green Thing brings you 8 tracks that are, if nothing else, to the point. 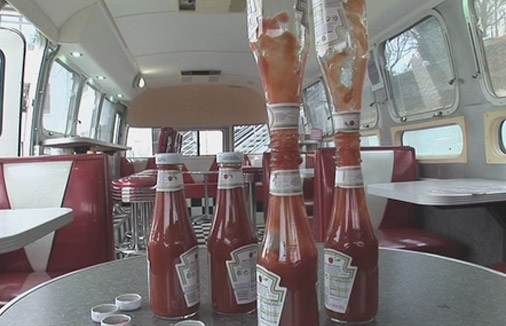 Food consumption is an ever-growing problem. So Michael Wright asked: what does all-consumption really look like? This beautiful film gives you an idea.

A miscellany of ecological vocabulary, a glossary of the lexicon of climate change, a… you get the idea. The definitive guide, from acid rain to Zippy from Rainbow.

Can we invent our way towards a greener future? With SNTM, Green Thing wanted to find out. Four marvellous carbon-saving inventions compete for public votes in order to win a £50k marketing campaign.

A Green Thing invention: a week in August to celebrate all there is to love about tap water. And there’s much to celebrate – it’s just like bottled water, but a thousand times cheaper, and tastes just as good.

The Next Big Thing Have a T-Shirt that you never wear, that’s fallen out of favour and sits at the bottom of a draw unloved and unused? Of course you do. Time for the T-Shirt to find salvation – and a new home. Every T-Shirt wants to be Saved.

NothingTM took the world by storm, but 12 months on and it’s old hat. So Green Thing brought on conceptual Krakatowa Naughton O. Nada to bring it up to scratch. The result? New Improved NothingTM, of course.

Katherine is football mad. She is a loyal supporter of Arsenal FC, plays for Islington Borough Ladies FC and coaches for Gunners in Islington in her spare time. Her second favourite hobby is kite surfing and she can sometimes be found chasing the wind.
Read More Share
About the Fabulous Food of Djibouti
Six Curious Business Culture Elements in Norway