I had many motivations for visiting Iran, but a photo I saw from inside the so-called Pink Mosque, officially known as the Nasir ol-Molk Mosque, planted the first seed of my trip.

The Nasir ol-Molk Mosque, is a 19th-century center of worship with stained-glass windows, which results in a flood of rainbow light streaming into it during the morning hours. It’s not only the most talked-about attraction in Shiraz, the city where it’s located, but is arguably the most Instagrammed attraction in all of Iran—more on that in a second. To be sure, whether you spend two or three days in Shiraz, the Pink Mosque is only the beginning of all there is to see here, even if it’s likely to be the highlight. Here’s how to make the most of your time in Shiraz, including an optional excursion to the ancient city of Persepolis. 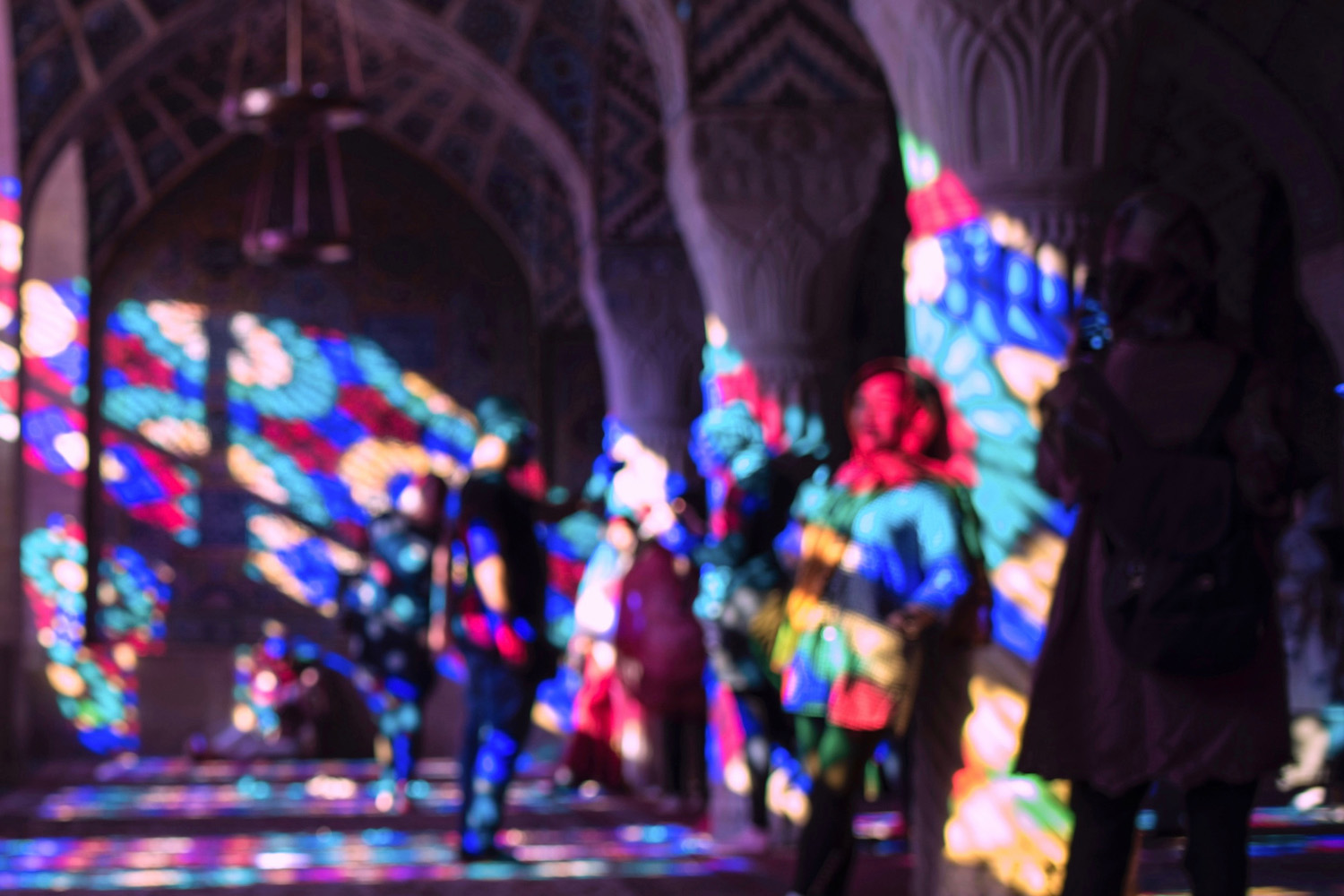 Where to Stay in Shiraz

As you probably noticed in my posts about Tehran, Isfahan and Yazd, I wasn’t generally thrilled with the quality of accommodation in Iran. Thankfully, Shiraz hid a profound exception to this rule: Forough Boutique Hotel, which served as my home in the city, was stylish, clean and within walking distance of the Pink Mosque.

Forough Boutique Hotel was already my best hotel in Iran, but if it improved its mediocre breakfast, it would actually be perfect.

Day One: In and Around The Pink Mosque

The Pink Mosque opens at 7:30 am, and while the “best” light for taking photos (and selfies!) doesn’t usually begin until around 8, I highly recommend arriving early. You see, the portion of the mosque that becomes bathed in rainbow-colored light is very small, yet hundreds of tourists flood into it in the early hours of the day.

Nasir ol-Molk Mosque has become so popular among visitors to Iran, that it has its own Instagram page, and a sign on the Pink Mosque wall that encourages people to tag the page. 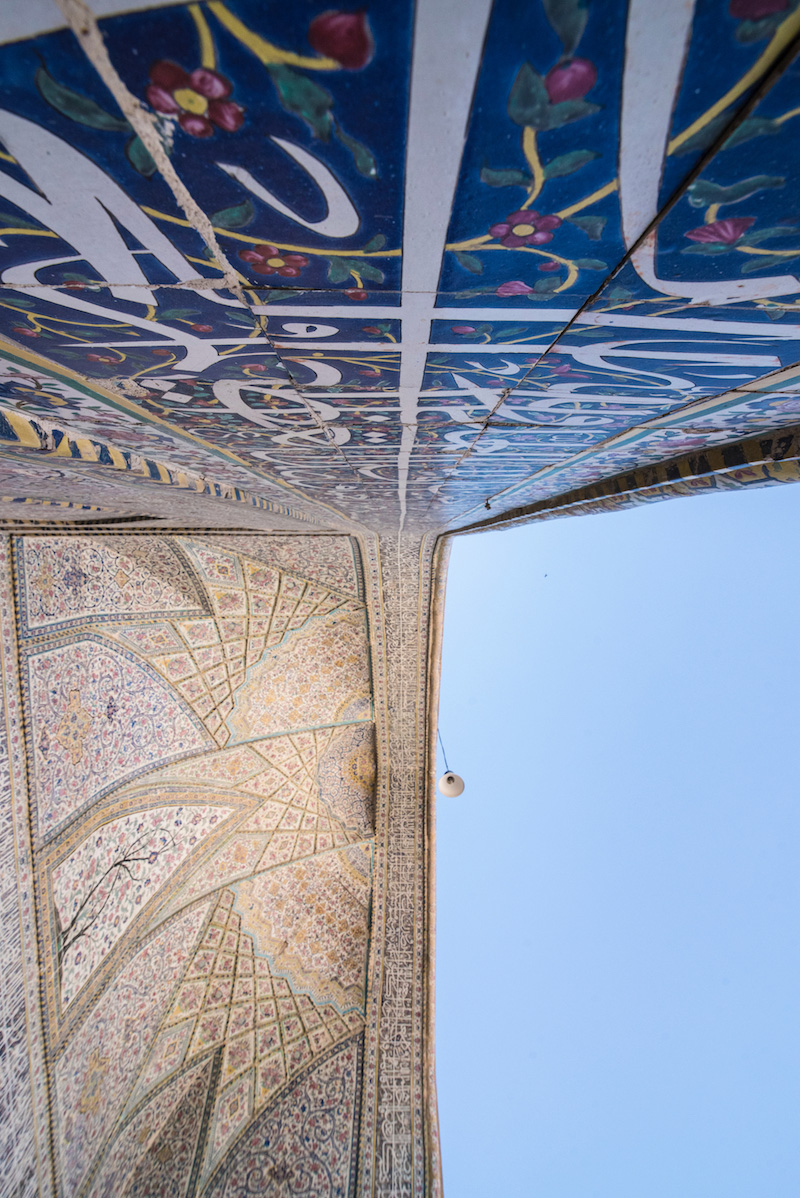 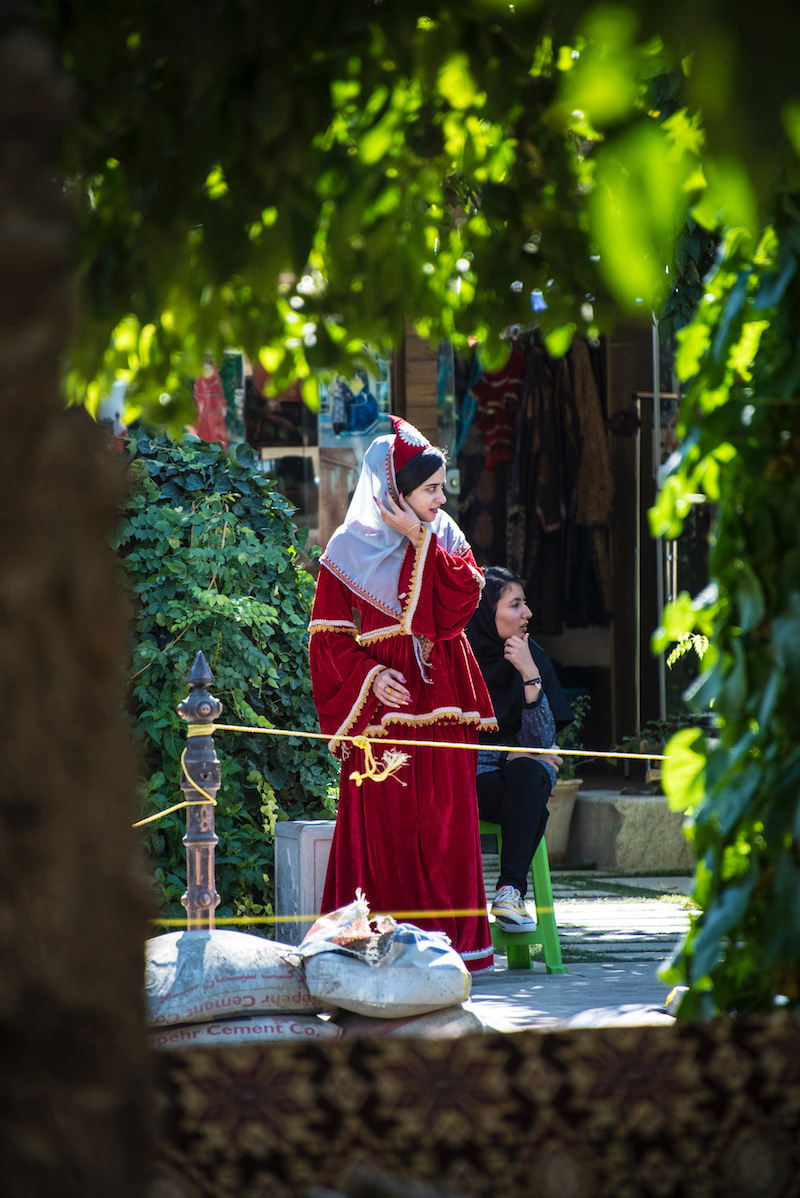 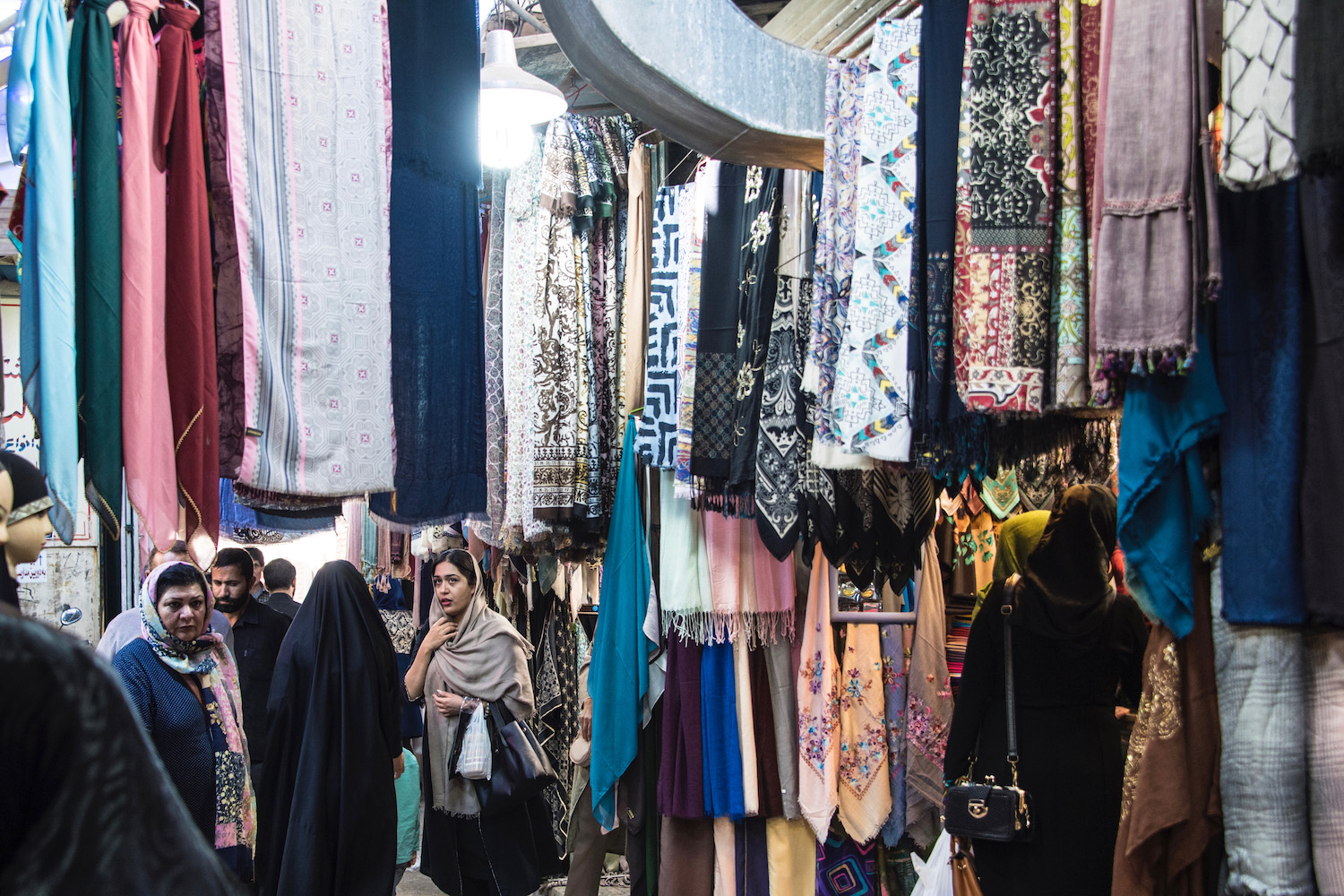 Spend the rest of your first of two (or three!) days in Shiraz exploring attractions around the Pink Mosque, which is conveniently located on busy Loft Ali Khan Zand Street.

Nearby Naranjestan Garden is not only home to beautiful Shirazi architecture, but a tranquil grove of orange trees—Shiraz’s most famous crop, excepting the grapes once used to make wine here. Vakil Bazaar is busy and exciting and home to its own not-so-shabby Mosque, while the Arv of Karim Khan Citadel is epic, even if it could use some maintenance.

I had the luck to be in Shiraz on the birthday of Hafez, one of the most famous Persian poets of all time, whose claim to fame (perhaps ironically, given the current situation with Iran’s government) was that he “lauded the joys of love and wine but also targeted religious hypocrisy.” But I digress. 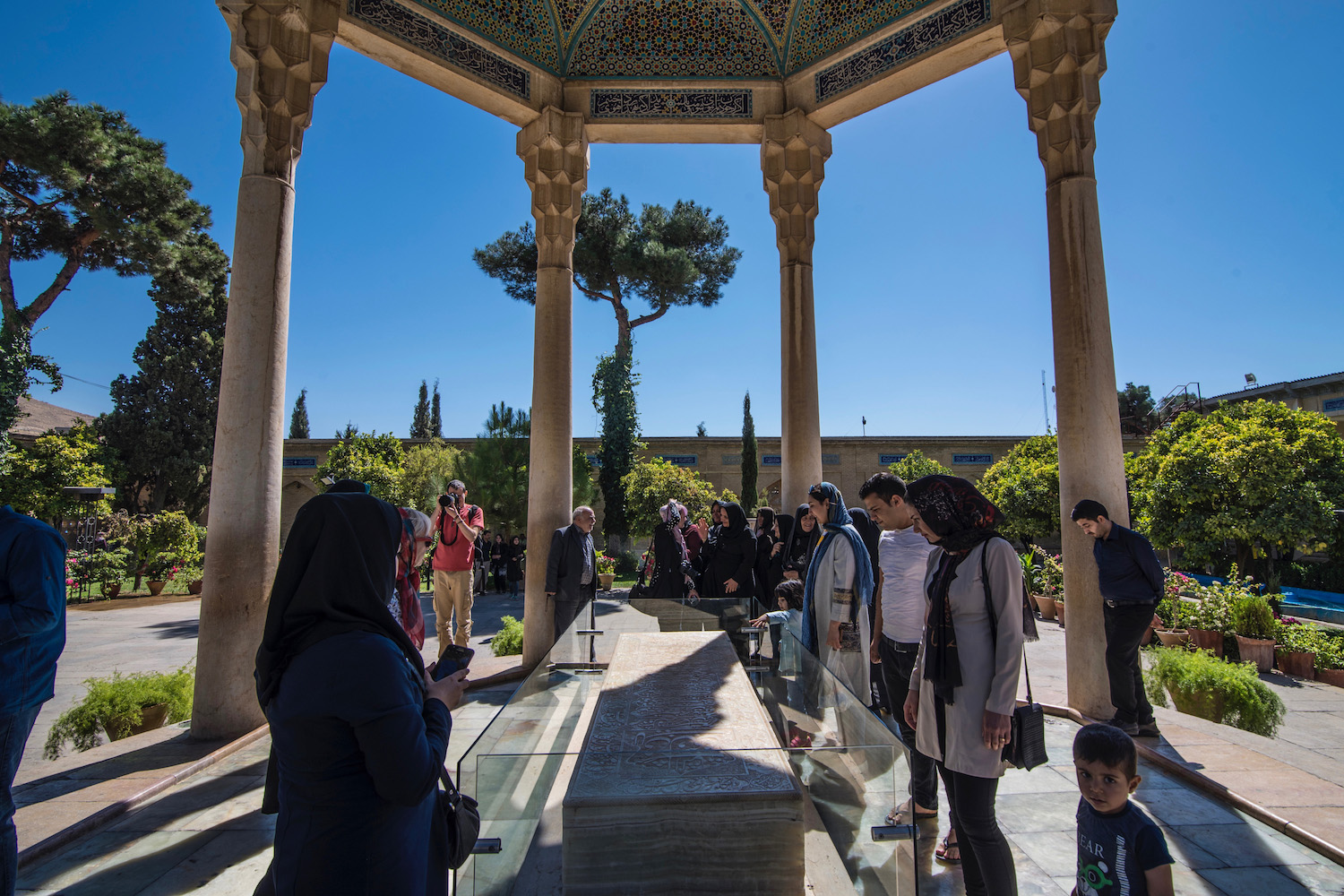 Indeed, my good fortune in Shiraz wasn’t just that I happened to be there on Hafez’s birthday, but that I got to visit his burial place that night. The Tomb of Hafez is gorgeous, epic and not creepy at all—and it’s but one of several poets’ tombs in Shiraz. 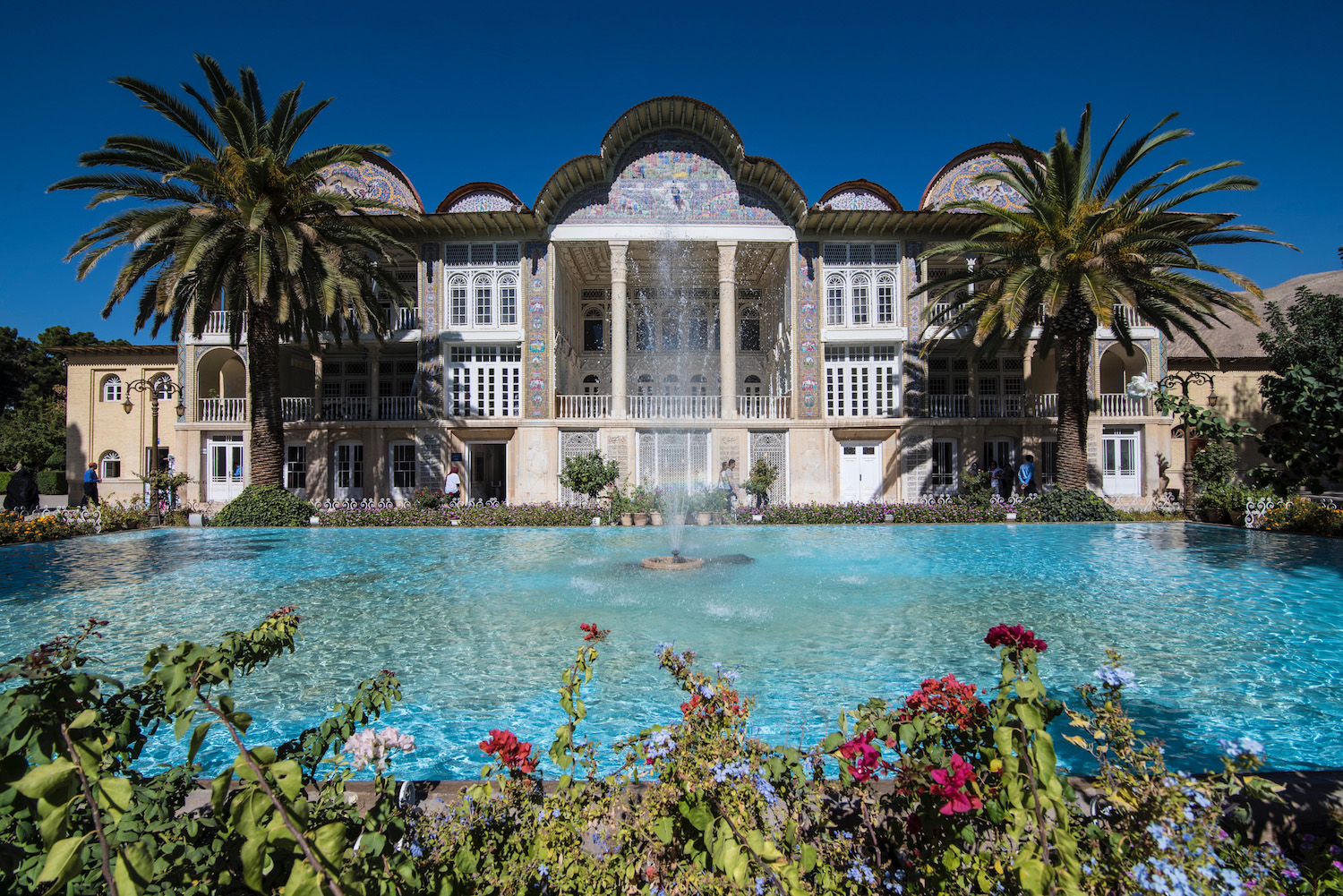 My specific recommendation for your second of two or three days in Shiraz is as follows. After visiting the Tomb of Hafez head to Eram Garden, which was the most magnificent and well-maintained garden I saw in all of Iran. 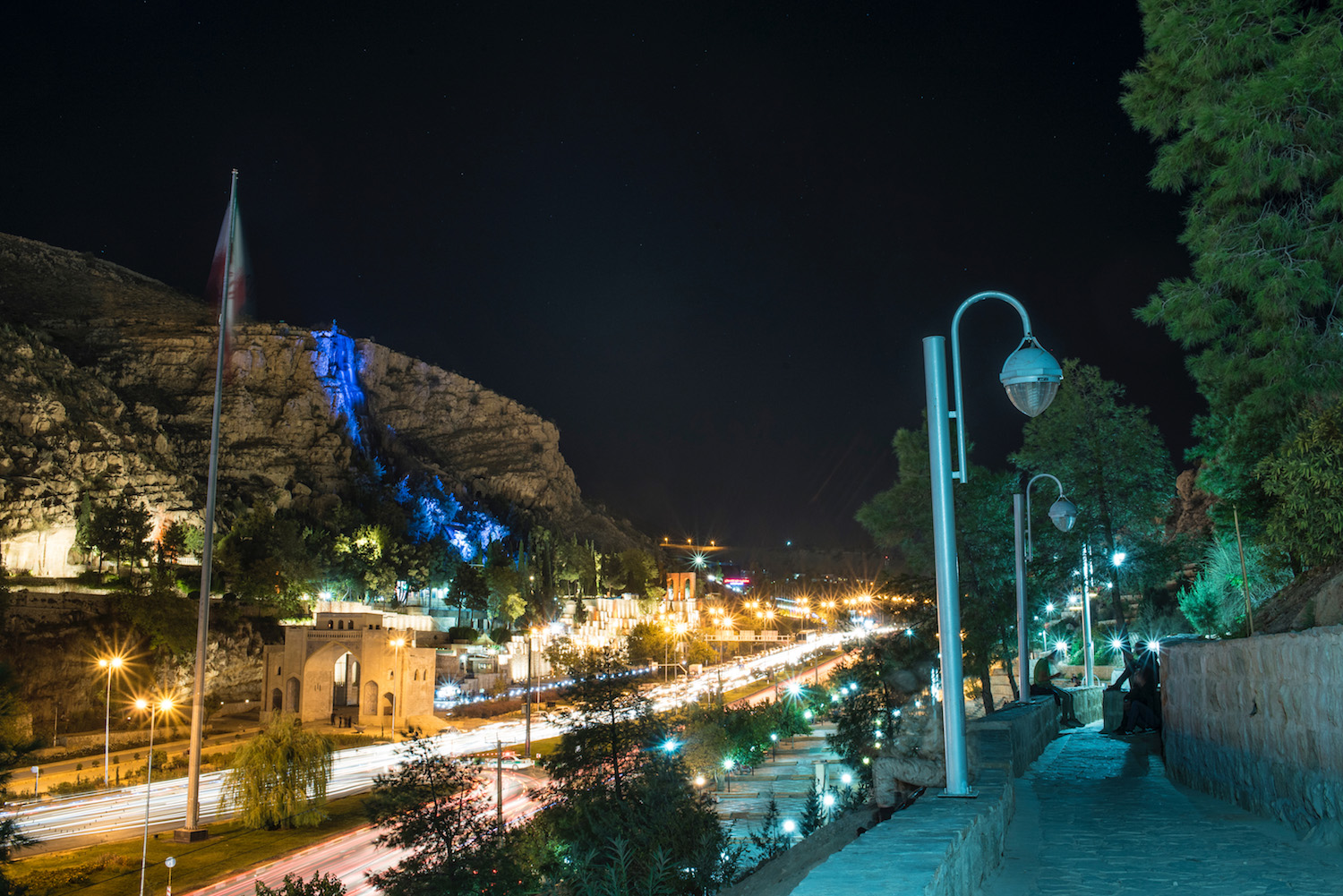 Then head to the Tomb of Saadi, which honors the 13th-century Persian poet as the “Master of Speech,” and pass the afternoon there before heading to Quran Gate and the so-called “Roof of Shiraz” to watch sunset.

Day Three: Is Persepolis Worth a Trip?

Speaking of serendipitous birthdays, today is the birthday of the ancient Persian King Kourosh (you might know him as “Cyrus”), which is a big deal for a certain portion of Iranians, including many of the young people I met during my trip. Unfortunately, many Iranians eschew the country’s pre-Islamic heritage, even if they’re happy to make a buck off it, most notably via the ancient city of Persepolis. 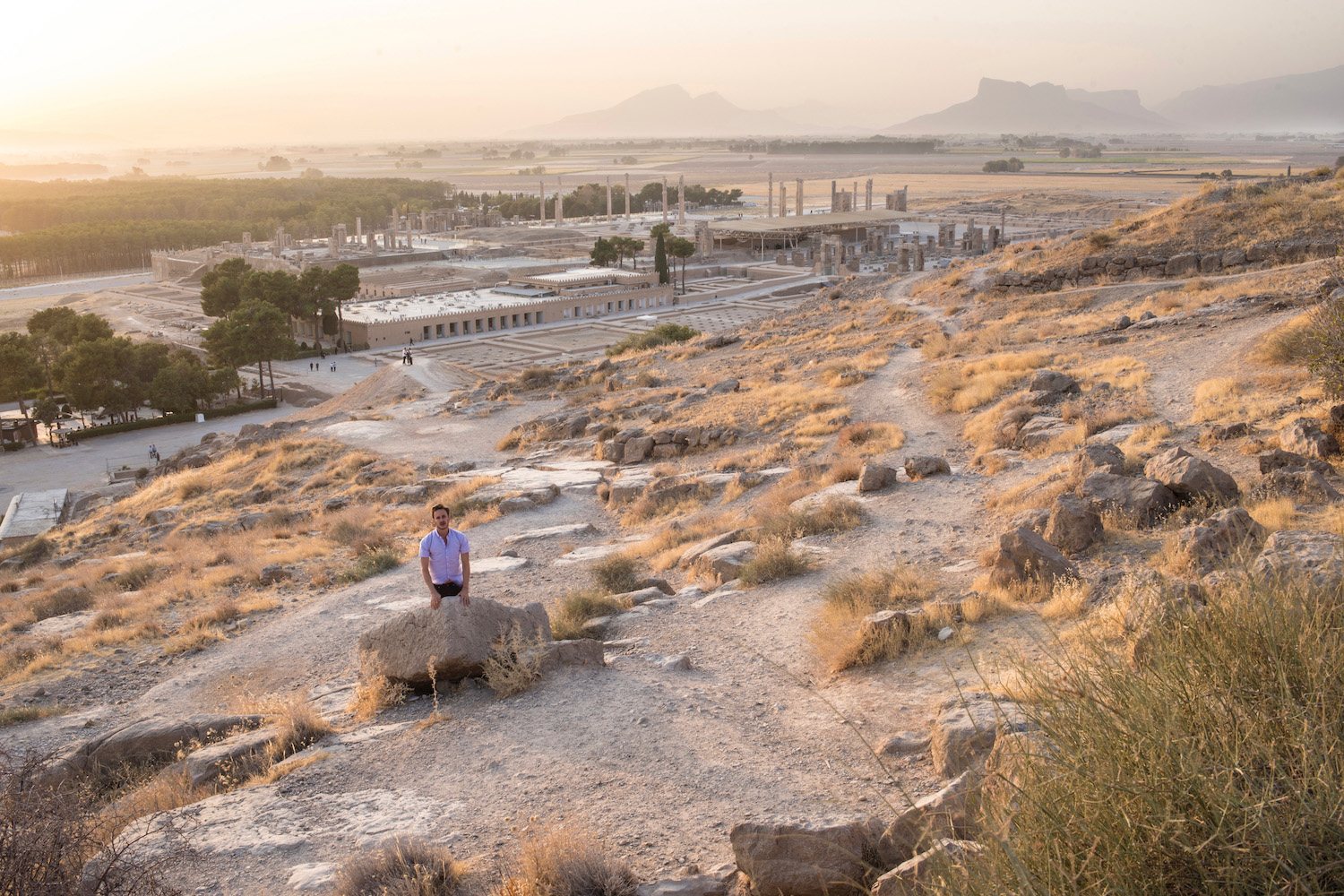 Strangely, in spite of how interested I am in the ancient Persian period, both in terms of rulers like Kourosh and Darius, as well as in the Zorastrianism I saw in Yazd and the Mesr Desert, I didn’t find Perspepolis very impressive, except for the view of it from a hill high above it.

The apparatuses used to stabilize and maintain the ruins all but, well, ruin the experience of walking through it, to say nothing of the “official” camera and bag policy (you aren’t supposed to bring either inside), which isn’t enforced, but is still annoying.

On the other hand, Persepolis is important—its origins date back to the rule of Cyrus the Great himself—and is very close to the city center, which makes it a natural (and, dare I say, easy?) way to spend your third of three days in Shiraz.

The Pink Mosque is both the most popular and the most impressive attraction in Shiraz, but there’s a lot more to this city than meets the eye. Whether you spend two or three days in Shiraz, and whether or not you make a day trip to ancient Persepolis, I think you’ll find southern Iran’s largest city to be a fulfilling part of your trip to Iran.

Note: I traveled in Shiraz (and the rest of Iran) courtesy of Surfiran. Whether you’re looking for a comprehensive Iran tour (which you’ll legally need if you’re American, Canadian or British) or simply need piecemeal Iran travel services, Surfiran can help you take your trip to the next level.

Robert Schrader is a travel writer and photographer who's been roaming the world independently since 2005, writing for publications such as "CNNGo" and "Shanghaiist" along the way. His blog, Leave Your Daily Hell, provides a mix of travel advice, destination guides and personal essays covering the more esoteric aspects of life as a traveler.
Read More Share
daRosario Truffle Oils & Butters, Perfect for the Holidays
5 Must Visit Spots in Canada