One Ukrainian tourist website proclaims: “Ukraine is the geographical center of Europe!” And then, confusingly, the first sentence after that title is, “Ukraine is one of the mightiest countries in Eastern Europe.” 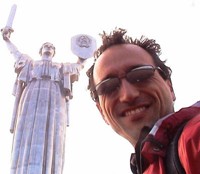 Starting in 1999, I visited Ukraine every five years. Each time I returned, Ukraine seemed to have taken three steps forward and two steps backward.

In 1999, I flew into Ukraine’s capital, which is often called Kiev, but we will use its official name: Kyiv (pronounced Kee-v). I stayed in the Mir Hotel. I learned that mir is a cool Eastern Slavic word that has two meanings: world and peace.

Although communism had officially disappeared nearly a decade before, its remnants were everywhere. For example, every floor of the hotel had a middle-aged, overweight female gatekeeper who was in charge of the floor. Besides having the thrilling task of policing the floor, this stern woman would also hold your keys, which clearly the receptionist in the lobby was incapable of doing. Similarly, at the bottom of every subway escalator, there was a guard whose stimulating job was to verify that life around the escalator was OK. Communism’s goal was to give everyone a job, so it invented millions of useless jobs. Many of these pointless jobs remain.

Another example of a communist leftover was the controlling and corrupt police force. In 2004, when I saw Kyiv’s colossal titanium Mother Motherland statue from far away, I used my camera’s zoom to take a photo. While snapping the picture, a policeman ran up and ordered me to stop. He thought I was taking a photo of a nearby military building that was in the line of sight of the distant statue. I showed him the photos so that he could believe me when I said that I wasn’t a spy.

Although I never faced corruption during any of my visits, in 2010, travel blogger Justin Klein got “shaken down” by police officers on five separate occasions during a short trip.

He offered tips on how to avoid such encounters:

Justin nearly left Ukraine early out of frustration, but he’s glad he stayed because he loved the people and the country overall.

Another communism hangover is that arbitrary rules are posted everywhere. Fortunately, it’s all in Cyrillic so you probably won’t understand them, although I learned to spot their favorite phrase, “Strictly Forbidden!” Ukrainians probably ignored half of the rules under communism, but nowadays they seem to ignore all the rules.

The strictness of our laws is compensated for by their lack of enforcement. — Whispered Soviet saying

Francis has written a couple of travel books including The Hidden Europe: What Eastern Europeans Can Teach Us and Hike Your Own Hike: 7 Life Lessons from Backpacking Across America. He also produced a 77-minute video about his CDT Yo-Yo.
Read More Share
Madrid and El Parque del Retiro
Exploring Estonia’s Lahemaa National Park