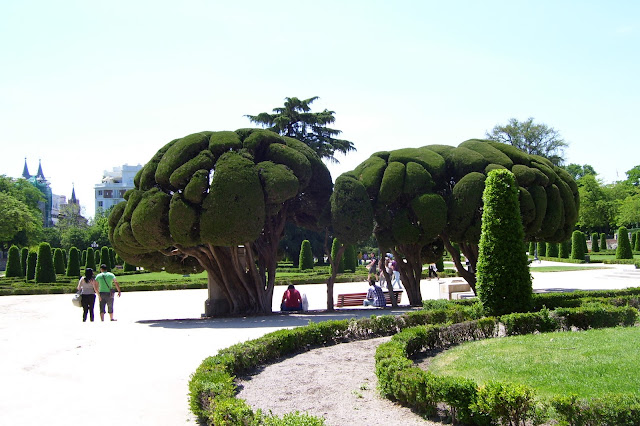 Aggressive sunlight turns dust particles into glitter floating through the heat, as I squint and stumble along seemingly endless dirt paths in Madrid’s Parque del Retiro. I’m looking for the Palacio de Cristal, a beautiful old greenhouse in front of a pond, but then maybe they’ve moved it since my last visit, over seven years ago.
In the meantime, I’m enjoying splendid views of the Madrileños out to play. Young parents tail squealing toddlers and toss them skyward, catching them and hugging them close before letting them loose to run again.

Younger couples enjoy furtive kisses and picnics on the vast expanse of green lawns and look out on a lake where paddleboats mingle with ducks and swans. Senior citizens in somber shades of navy, black and brown stroll winding paths, hats on heads, and canes in hands. 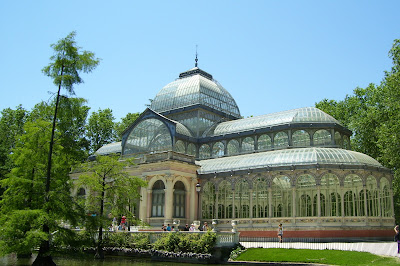 While my mind has been wandering off the beaten path, my feet have been busy, and I am coming up fast my destination. It’s just as I remember it, sparkling in the sun like a giant glassed-in-birdcage. In the pond in front of it, watery rainbows shoot into the air before splashing back into the rippled reflection of a curvy glass structure with a white steel skeleton planted among lush greenery. Here, in this hidden corner of the park, a cellist is parked in the shade of one of many horse chestnut trees standing watch around this historic 1887 greenhouse. Notes strung into the air follow me up the stairs and all the way inside where palms brush against vaulted glass ceilings, flirting with the sky and so much exterior foliage. 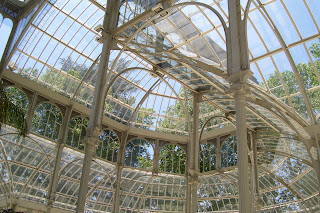 Now that I’m bathed in sweat after boiling for a while in the liquid soup that tropical plants prefer, it’s time for tapas, the Spanish version of bar snacks. So I wander my way back out of the immense Parque del Retiro and step out of the heat and into a dusty establishment where a few middle-aged men nurse drinks at the bar.

I take a seat on a tall stool and kick my legs back and forth above a floor scattered with toothpicks and crumpled napkins. Custom dictates that after you finish with your tapa or drink, you throw your napkin or “servilleta” on the floor. So instead of emptying trash bins constantly, every so often, the bartender comes through with a broom.

After perusing the tapas available behind the glass counter, I decide on “boquerones,” a white anchovy filet served uncooked and marinated in garlic, parsley and vinegar, then soaked in olive oil and served wrapped around a green olive or with slices of  bread. Mine arrive in a small clay dish, swimming in olive oil with a few loose olives and a couple of slices of bread on a napkin. I spear one on a toothpick and try to airplane it in without dripping any oil down my face.
The white flesh of the fish is tangy and garlicky and combines well with the salty olives and crusty bread. I wash it down with a frosty “clara”, part lemon soda, part beer = low alcohol content and look at my filthy sandal-clad feet. In Madrid, la vida es buena -dust and all.
Chris Ciolli

Chris Ciolli is a Barcelona-based writer, translator and artist with Midwestern roots. She shares her escapades as a Missourian in the world at Midwesternerabroad.com, and writes about Barcelona from a guiri-gone-native perspective at Barcelonaforidiots.com. A closet foodie and self-proclaimed art addict, Chris typically blogs about the drinks, eats and other cultural attractions she encounters on her travels. In her spare moments, she reads obsessively, slurps excessive quantities of coffee and tea, and plays with art supplies and kitchen tools. Oh, and travels as much as humanly possible.
Read More Share
Salvitxada, Calçotadas, Onions & Sauce in Barcelona
Ukraine: What It Was & What It has Become…