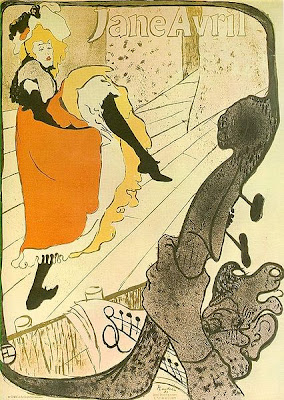 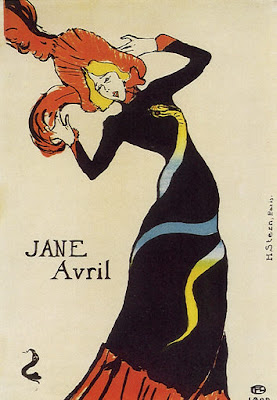 Jane Avril’s flinchingly high kick on the poster for her Jardin de Paris performance is perhaps the most defining image of turn-of-the-century Paris. Even at the time, Avril credited the Toulouse-Lautrec designed poster with launching her career, and now it’s become one of the most widely reproduced posters of all time.

However most peoples’ knowledge of the enigmatic dancer largely ends here (unless they rely on the heavily fictionalised story based on her life in Baz Luhrman’s Moulin Rouge – which they really shouldn’t). Like so may of the icons from this era (which is why this is probably my favourite era to learn about), her life was full of vibrancy, tragedy, mental illness and intrigue. The daughter of an abusive alcoholic courtesan, Avril (then Jeanne Richepin) fled home aged thirteen only to be incarcerated in a mental asylum. She was diagnosed with Syndenham’s chorea, a condition characterised by the rapid, jerking movements of the hands and feet. At one of the balls held for hospital patients, however, she astounded her doctors and fellow patients with her dancing: Avril channelled her ailment into the medium of dance, explaining her infamous eccentric style and later earning her the nickname La Mélinite (after a powerful form of explosive). 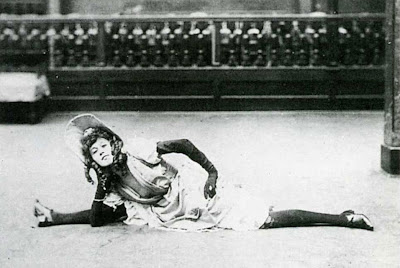 A newly opened exhibition at the Courtauld Institute explores this lesser known aspect of Jane Avril’s life, presenting research on the links between contemporary theories of female mental illness and hysteria and Avril’s dancing. It will also explore the close relationship with Toulouse-Lautrec which blossomed alongside her dancing career after her release from the asylum aged 16. Their close friendship is revealed by the more personal and subdued portraits of Avril that Toulouse-Lautrec painted: revealing the complex and melancholic figure which lay behind the celebrated performer. 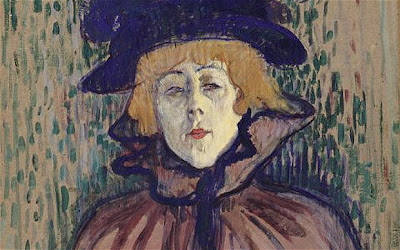 When she's not up to her eyeballs in writing, Rosa works as an assistant to stylist Aisling Farinella and volunteers at various art galleries. Her musings on life, style and art can also be found over at her blog, Too Gallant.
Read More Share
Wandering Through the Netherlands (Or is it Holland?)
Biking Through Argentina’s Wine Country