Here’s a brief but heartfelt obituary I wrote for the Totally Dublin website after hearing of his death this past week. Read the original here. 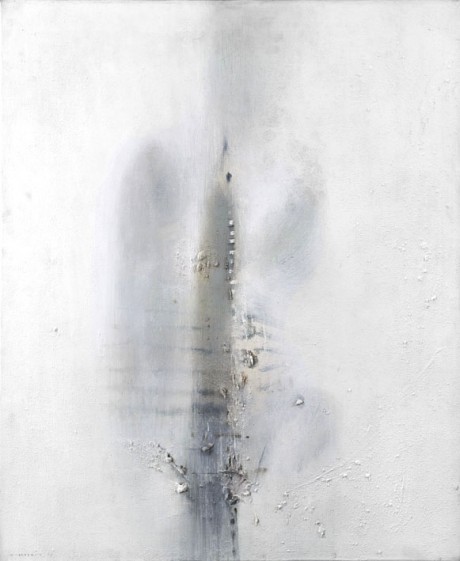 It’s not very often people react with shock when someone at the age of ninety-five dies. But breaking the news of Louis le Brocquy’s death to a few fellow History of Art students lurking around the corridors of Trinity, several faces fell as if he was some bright young eighteen-year-old. The painter has dominated the Irish art world for so long, it seems, we all thought him immortal.
A self-taught artist, le Brocquy rose to international acclaim in the mid-twentieth century, an era of staunch Catholicism, economic hardship and de Valera’s ‘family state’: his thoroughly modern style of painting, inspired by the European and American avant-garde, must have been a jolt to Irish cultural life. In 1956, he represented Ireland in the Venice Biennale, where he scooped up awards for his contribution, A Family – now housed in the National Gallery of Ireland’s permanent collection, making Le Brocquy the only Irish artist to have been acquired by the gallery during his lifetime.
Today, he is probably best known for his series of portraits of leading Irish literary and artistic figures. A series of floating heads of the likes of W. B. Yeats, James Joyce, and Francis Bacon, the works are rendered in subtle hues of blues and pink, and suspended almost nihilistically above a plane of unrelenting white. But this series is by no means his best work, and it’s quite an oversight (not to mention a sad reflection on celebrity-worship) the works from this series – and in particular, that poxy Bono portrait – are reproduced more than anything else Le Brocquy painted.
Ramble up to the Hugh Lane, and you’ll be treated to some of his earlier output. His White Series, completed in the 50s and 60s, is dominated by densely layered smears of white and off-white paint that clogs, chalk-like, until it somewhat resembles a plaster cast. Somewhere between fields of snow and the white-washed walls of Spain (where Le Brocquy travelled in 1955), the figures blanketed by Le Brocquy’s powdery whiteness become abstracted, but some how their emotional resonance is heightened. This is especially the case in his portrayals of his wife, fellow artist Anne Madden. Following her injury in a riding accident in the mid-fifties, Le Brocquy painted a series of emotionally charged, intimate and jarring images of female torsos that explored both her physical agony and female sensuality.
As a young artist, Le Brocquy claimed, “I’m struck, not by what I’ve been able to subscribe to painting, but how much this mysterious old art has taught me about the nature of life.” And it was when exploring this complex nature of life, and the personalities and intimacies that shape it, when Le Brocquy was at his finest – and it’s these works that will ensure his popularity for generations to come.
Rosa Abbott

When she's not up to her eyeballs in writing, Rosa works as an assistant to stylist Aisling Farinella and volunteers at various art galleries. Her musings on life, style and art can also be found over at her blog, Too Gallant.
Read More Share
April in Paris in San Francisco This Weekend…
Cai Guo Qiang’s Awe-Inspiring Work Now at Doha’s Arab Museum of Modern Art in Qatar