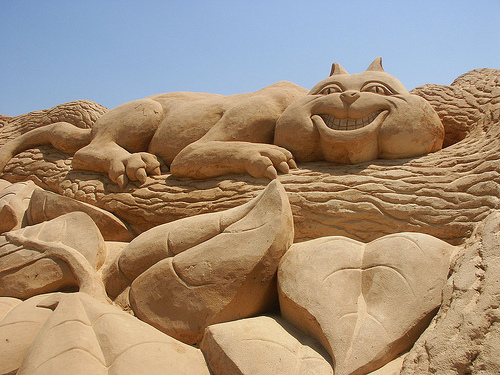 The Pera International Sand Sculpture Festival (FIESA) has been held annually in Faro, Portugal since 2003, with a large selection of sand sculptures being displayed each year. The event appears to be growing and sculptures are now being produced to match specific themes.

The theme for the 2012 edition of the festival was idols, with famous figures being sculpted from sand, including the likes of Charlie Chaplin, Michael Jackson and members of the Beatles.

Music is the theme for this year’s event and 50 artists have been working on creating sculptures, some of which are more than 12 feet in height. The figures depicted this year include Elvis Presley, Bono and Mary Poppins. As you might gather from that list, the festival involves a lot of fun and often brings together an eclectic mix of characters.

The process of putting the event together is no small task, with organisers Prosandart having to manage the movement of some 40,000 tons of sand, in order to create an exhibition that covers a huge area. Visitors are drawn from areas throughout Portugal and elsewhere in Europe, as are sculptors.

There is a fee to enter the exhibition, but prices are reasonable and children under the age of 5 are able to enter free of charge. The festival is always a big hit with families, providing a unique and memorable experience. The temporary nature of the exhibition makes the entire experience that bit more special.

For added enjoyment, there’s also the possibility of visiting FIESA after dark. During such times, the individual exhibits are all illuminated, creating some wonderful effects.

FIESA is recognised as being the largest exhibition of sand sculptures anywhere in the world and there is a significant interactive element. Each of the exhibits is accompanied by some text, offering detailed information about the character being depicted. In addition, an overview is given of the design and construction process.

For children, there is a dedicated area where encouragement is given to experience the thrill of actually creating sculptures. Expert advice is available from tutors and experts, allowing kids and adults alike to learn more about how this exhibition is created each year.

The 2013 version of the event will be open until 25 October. During the peak summer months, it’s possible to visit the festival until late in the evening each day.

Previous themes have included the Living World, Hollywood movies and Lost Worlds. The very first edition featured a wide range of fictional scenes and immediately captured the imagination of the public.

Interestingly, sand often has to be transported from a wider area, since there are very particular requirements from some sculptures. It’s absolutely critical for sculptors to have the right mixture of sand and water. No other materials are used as part of the construction or maintenance process.

Perhaps surprisingly, the sculptures are not altered by strong winds, or even by driving rain. Indeed, the organisers suggest that it’s possible for sand sculptures to survive for many months, or even years. No water is added to the sculpture, once the construction process has been completed.

The festival can be reached by taking the M524 road, which runs between Pera and Algoz. Those travelling from Faro will find that it’s useful to hire a car, given that public transport options are relatively limited.

Her photography and travel articles have appeared in both print and online publications around the world, including Travel and Leisure Asia, Unearthing Asia and Hip Compass Escapes.
Read More Share
A Whole Lotta “Koh” in Thailand
New York City’s Famous Booze Brunches