The long ride from downtown Seoul to Incheon airport offers plenty of time to contemplate. The 45-minute trip, punctuated by only a few stops, is fluid and uneventful. The Kubrick-esque polished floors and chrome, and buffed upholstery, and the soothing voice of the quadri-lingual announcer reassure and relax.
It took a nuclear accident to get us to Korea; our plans were initially for Japan, flights booked a week before the plate shifted and the sea fell on the earth.
Korea was a good backup, though my knowledge of the country was pretty well limited to the opening sequence of M.A.S.H. and my daughter’s obsession with Korean pop stars. Other than that, the country was a mystery; I hadn’t even bothered skimming the CIA Factbook before arriving. Kim Jong-Il, kimchi, Hyundai. Japan, watered down and split in two in a cold-war leftover. What else did you really need to know?
Initial impressions confirmed the stereotypes. Seoul was massive, forests of what must be soul-destroying apartment blocks, punctuated by uninspired office towers. Garish signage plastered over buildings, occasional English brand names providing partial context to the dominant commerce of an area. Left-hand driving, traffic lights, wide boulevards, not enough trees.
But the people seemed friendly enough, and we ventured into town time and again, forays from our guest house. The neighbourhood pleasant, the shopping malls indistinguishable from North America.
We had one major trip, a three-hour dash cross-country past more faceless apartment blocks and ginseng farms to the southern port of Busan.
And that’s when I started to get the hint I was experiencing something a little different.
It wasn’t the city itself; Busan is little more than Seoul writ small, the same franchises dominating the street and corporate logos the skyline.
It was in the subway that my perception of the country began to change.
We were surrounded by Koreans, and really, no one else. The country is overwhelmingly a single race, a monoculture. More old folks in Busan, more working class. But all Korean. And no tourists. Anywhere. We were stared at, brown-eyed gazes shifting away quickly when we turned towards them. As North Americans, we were a novelty act, something unusual in town.
You could go the day and not see another European face. We realized we were out on a long limb, off the beaten tourism track despite the city’s modern surroundings.
On this trip we’ve been to several places described as ‘exotic’ or ‘remote’. In Laos, supposedly one of the last frontiers of tourism, we were boating south down the Mekong River on a two-day trip. We were in one of six boats that hauled anchor that morning, each packed with over 100 European tourists. That pilgrimage is repeated daily, filling the hotels and swelling the local economy downstream in a daily pulse. We were not unusual, our experience not unique by any means. 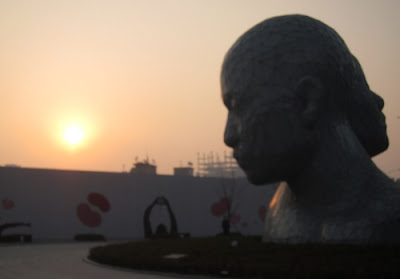 It was the same elsewhere. Swaths of ‘mystical’  Bali are an Australian cesspool. You can get a  decent chocolate cheesecake and cappucino on  the edge of a Jurassic-period forest in the  centre of Malaysia.
In short, few locations touted as places to  explore are much more than well-oiled tourism  machines anymore. How exotic is a place where  you have to wait for another European tour  group to get out of the way before you take your photo?
But here I was, in modern, metropolitan Korea, a complete stranger in a strange land. Clerks could not speak the language. I could not speak theirs. I didn’t look like them or act like them. Getting lost meant frustrating jabs at maps with uncomprehending locals. I had to watch and understand their way of doing things. I was illiterate, innumerate, and at the mercy of strangers. And there was no one like me to turn to for help.
It became a wonderful thing.
I began to realize you don’t need bamboo and palm leaf roofs to experience an exotic locale. Connecting with a foreign culture is just as hard- and rewarding- and authentic– six stories underground in an ultramodern subway station.
The Koreans are busy with their lives. Walking the streets of Busan or Seoul or any one of the uncounted towns means seeing locals really living their daily lives and culture- far more honestly than any 6:30 cocktails-and-buffet gamelin show.
And when Koreans do show off their traditions, interestingly, it’s more for themselves, not foreigners.
The day before we left we took a cablecar up Namsan hill in Seoul. There’s a CN Tower-style communication antenna at the top, remnants of an ancient shrine, and mid-20th century concrete fortifications. I was bracing for the perfect tourist-trap. There were drummers, dancers, and warriors, all in 18th century garb.
But surrounding the open-air stage were almost exclusively locals, watching and politely applauding the dance and martial displays. A handful of non-Koreans were there, but it was clear the Koreans were doing this for themselves, not for outsiders.
It was the same at a local palace complex, and walking through a neighbourhood of traditional residences.
Koreans are busy remembering, re-living, and re-learning.
It’s hard to realize, seeing the sophistication and intricacy of civilization in South Korea, that 50 years ago this state had the GDP of Ghana. That starvation wandered the land. That the people here, in a country with no oil, no iron, no hydro potential, built itself up from nothing to be one of the top 20 economies in the world.
And they are still busy doing it. So busy they are just learning the tricks of the tourism trade, catering to the foreign curious and international time-wasters. So cultural exhibits and events display a charming innocence here, ham-fisted attempts at building a market for the culture of leisure they’ve worked so hard to join. We’re welcome to join and watch, but we’re not essential to the equation. Tourism here hasn’t the careful slickness of Thailand, the sad sycophancy of Cambodia, the vile mendacity of Bali.
Which makes this trip, to Korea, perhaps the most honest cultural interaction we’ve had in the last six months. And I just began to realize this as the train pulled in to the airport station.
Korea is very much an undiscovered country. I will be back.

John Boivin is new to the blogosphere but not to writing. He worked as a print, radio and web journalist for more than 25 years until his retirement in 2010. He is now indulging in an old passion, landscape painting, as well as a new one, travel. He lives in Whitehorse, Yukon, Canada with his family.
Read More Share
Anthony Turton on Reinventing Uncivilization
Silicon Valley Women of Influence 2011: #SVWOI