Tourists have been underwhelmed with Brunei for years. The guidebooks generally paint the picture of a dull place, with little to do. I want to take that with a grain of salt, as most guidebooks are tuned to the sensibilities of drunken Australian frat-boys. So while part of the family flies off Borneo from Kota Kinabalu, my daughter and I hop on the four-hour ferry to Brunei. 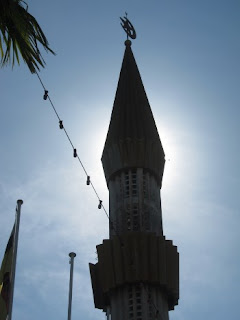 Brunei has a history that goes back 1,000 years, but the modern postage-stamp country is an accident of British geopolitics in the region. It was created partly through the efforts of one of those early 19th-century freelance imperialists someone should make a movie about, and botched negotiations for unification with the rest of Malaysia in the late 50s and early 60s. It only gained independence from Britain in 1984. The end result is a privately-held enclave making an unremarkable and somewhat distasteful family among the richest people in the world.
We arrive, and are ushered quickly through customs, and onto a dingy minibus for the half-hour drive into town.
Well-kept homes populate both sides of the well-kept highway. I’m reminded it’s a country with free health care and education, and no income or corporate taxes, which even ofers subsidies to buy a car. Wealth almost beyond measure from oil. The ‘Shellfare State’.
Fantastic modern office towers rise out of fields- home to various government ministries. It’s an urban layout made for cars. We saw no bicycles, no motorcyles, no pedestrians.
We’re dropped off in the downtown core of Bandar Seri Begawan, Brunei’s capital. Five blocks wide, maybe ten blocks long, peppered with attempts at architecture. We’re settled into our 80s-era hotel just as night falls, and decide to hit the town. Forewarned being forearmed, we expect no nightlife. And are thus not surprised.
It’s just short of seven, but no one is walking the streets. No cars make jaywalking the least bit dangerous. Office blocks dark from the second floor up. But there is light, at street level. We walk down Jalan Sultan, a double-wide downtown street, past CD shops, jewellers and restaurants. The intricately-cobbled sidewalks glow in the dark from the light of commerce.
Brilliant white fluorescents, clean tiles and booths- we choose a restaurant that both satisfies us on its sanitary appearance and ability to hide our ignorance of local etiquette. We’re welcomed by an Indian man-all the shopkeepers here seem to come from the subcontinent- and we slide into a booth.
And into heaven.
Our host, unbidden, brings us some samosas and sweet snacks for appetizers. We order from the menu- a roti telur (with egg), chickpea masala, kuey teow ayam (chicken with large egg noodles), and murtabak daging (the house speciality, we’re told, a thick roti with beef and vegetables). Small dishes of sauces from yellow to red offer various wonderful ways to torture our tongues further. The best orange and lime juices we’ve had this trip.
We eat till we can’t any more, and pay our bill. Twelve Brunei dollars- about $9US, and we walk out happy and satisfied. We wander some more just to aid digestion, and the downtown offers more of the same- empty parks, open but customer-free stores. Thunder rumbles overhead, lightning flashes through the cloud decks, but there’s no audience on the street below. 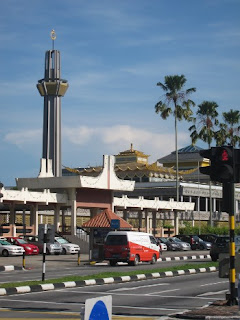 There’s no drinking in Brunei, but that can hardly be the only reason for the empty streets. We’ve been other places where the majority can’t drink, and the coffee shops are alive, teens walk in laughing gangs, street hustlers hang on their cell phones, parents and children play.
And it’s not that the people aren’t friendly. We are met with smiles and greeting when we catch a local’s eye- one of the nicest receptions we’ve received in SE Asia. And we feel perfectly safe, even where the streets are dark.
But it’s not alive.
Maybe, I think, it’s a function of a society where only one person- or family (and the corporation it’s tied to) really has a say in what is to be. No one has a stake, a reason to try to strive, to create. To make a different world. Brunei is a place where you work, where you consume, where you keep your nose out of the sultan’s business. Nothing intangible is being created out of the chaos of people interacting, just for the sake of it. A monoculture of power is as lifeless as a monoculture of agriculture. Both mislead with the outward appearance of health and prosperity.
We spend just over a day in Brunei. The next morning we visit the sultan’s regalia museum, and finally get a peek inside a mosque (Brunei’s is beautiful). We miss some touristy things- the water taxi, a visit to a wildlife sanctuary- but that’s really more of the same as the rest of Borneo.
It would have been worth staying one more day. But probably not two.

John Boivin is new to the blogosphere but not to writing. He worked as a print, radio and web journalist for more than 25 years until his retirement in 2010. He is now indulging in an old passion, landscape painting, as well as a new one, travel. He lives in Whitehorse, Yukon, Canada with his family.
Read More Share
Atlantic Bring Vintage
International Global Experts Conference