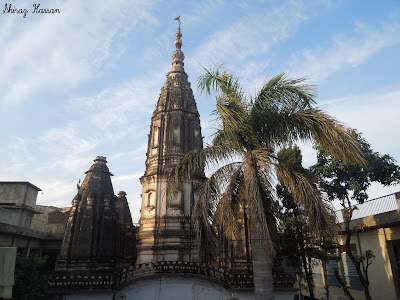 A trek through the old areas of Rawalpindi reveals to us many examples of old architecture: silent testimonies of our heritage, narrating tales of our past, stories of our land. Unfortunately, these exponents of our history are in a state of utter neglect and cry out for immediate attention by the authorities. 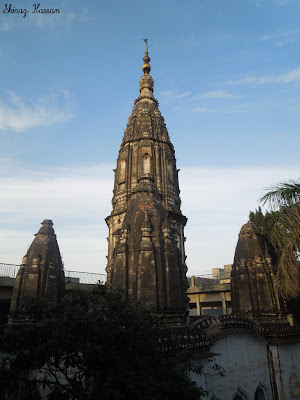 In the middle of the area that is commonly known as Kohati Bazaar, one can see the dome of a temple which is almost blinded by the high walls of an academic institution. Here stands one of the beautiful, historic landmarks of the city: Kalyan Das Temple. 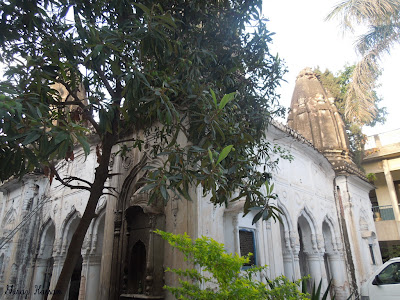 Outside this building, you can see the board of Government Qandeel Secondary School for visually impaired children. On entering the main gate of the school, one is at once confronted with the sight of a magnificent architectural form which stands right in the middle of the school courtyard 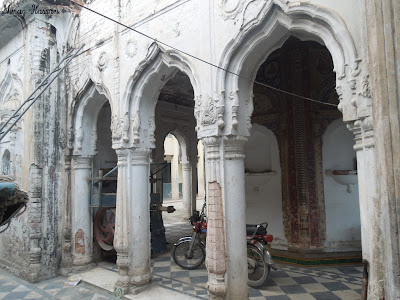 As I entered the building, I turned to the security guard, and queried him casually, “I just want to see.” He nodded his head in agreement and asked me to go ahead.
This temple was named after a generous resident of Rawalpindi, Kalyan Das, who laid its foundation stone in 1850s, and it is said that it was completed in 1880. The Kalyan Das temple is believed to have had more than 100 rooms and was spread over an area of about seven acres, besides a vast pond around the main temple building. 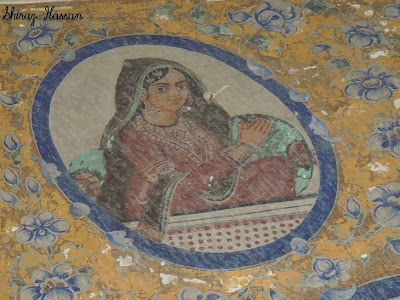 According to some reports, Kalyan Das had no children but his brother had. One of the grandchildren of his brother is Saghir Soori, the owner of Saghir Apartments — the tallest residential tower in Delhi. Kalyan Das’ family had a residence by the name Soori Building in Kartarpura (a locality near Kohati Bazaar), which is now known as Noori Building. 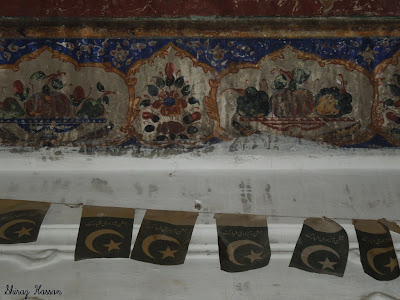 One of the significant facts of the Kalyan Das Temple is linked to the Amarnath Yatra, which is an important religious ritual in Hinduism. Hindu pilgrims used to stay at this temple en route to Amarnath in the mountains of Jammu and Kashmir, making it a very important place for Hindu worshippers 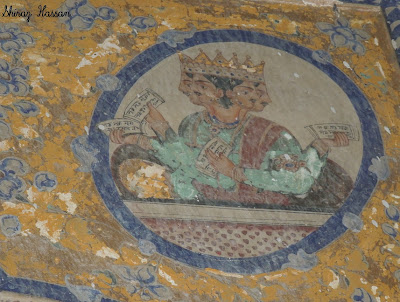 Like many other temples of the city, in 1947, during the partition of India, Kalyan Das temple was also left abandoned as the Hindu population left the city. Today this magnificent architectural piece still stands tall but the complex has been brutalised and vandalised over decades and is in a state of decay. 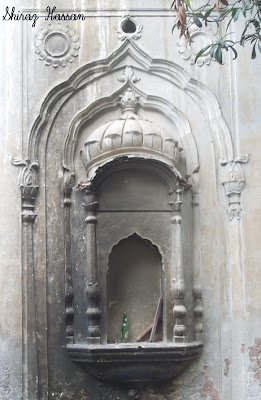 The beautiful paintings engraved on the walls of the temple are fading away; the damp roof of the main architecture pours in rainy days. The rooms of the main complex are used as store rooms and are kept locked. The idols are missing but their marks attract the attention of visitors. The many spires in the temple complex are still imposing but 60 years of neglect has made them colourless. The white paint used to brighten a canopy inside the complex has, in fact, buried its original floral work. 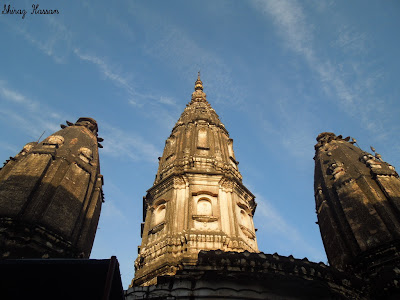 After the partition and migration of the Hindu population from Rawalpindi, the temple remained functional. In 1956, it was taken over by the Auqaf Department and survived as a place of worship until 1958 when a school for the blind, started by Begum Farooqi, was shifted into the complex. At that time it had a Baradari with rooms for worshippers, a pond and an Ashram. 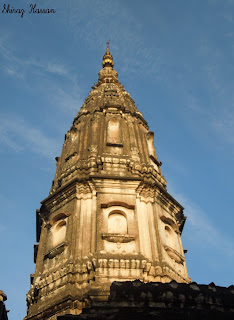 In 1973, the school was taken over by the Punjab government. A new building was erected for the school in 1986 during the time of General Mohammad Zia-ul-Haq, when the wave of Islamisation was in full boom. It was the time when the original buildings surrounding the temple, the rooms and the pond were demolished and deprived of their beauty. A seminary nearby acquired almost half of the temple land. 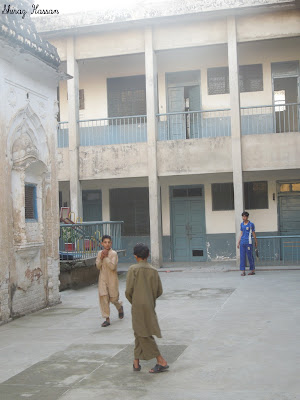 The security guard at the school’s gate said that Muslims vandalised the temple at the time of partition. In 1992, in the wake of the demolition of the historic Babri Mosque in Ayodhya (Uttar Pradesh) by Hindus, when several Hindu temples were demolished across Pakistan, luckily the school administration prevented this temple from meeting the same fate.
“Its our national heritage and we should preserve it,” the security guard asserted! 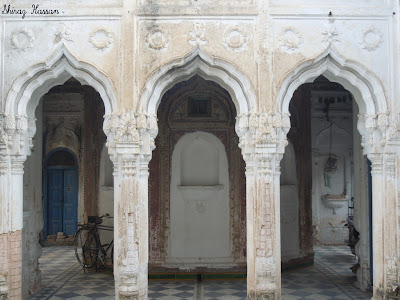 According to him, some people in the school’s administration are thinking of demolishing the temple to increase the space for the school. But there are some good people too who do not wish so, he added, urging that this heritage building should be renovated so that it doesn’t meet any mishap. 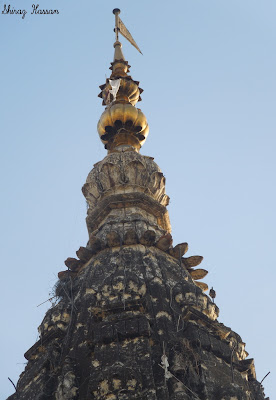 The Punjab government has constructed some new rooms and hostels for the visually impaired students of the school in the complex. It can be claimed that despite its decaying condition, this temple is still much better preserved as compared to other abandoned temples of the city. 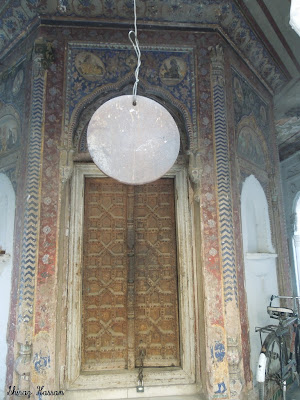 I saw some visually impaired kids playing cricket in the school yard. I asked one of them named Mustansir, “What are you doing here?” He said, “I am studying.” On asking what he was studying, he said, “ABC and 123.” It made me smile.  When I was leaving, he urged me, “Where are you going, stay here!” 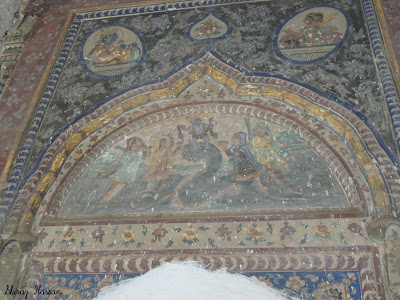 In my view, this is the best use that an abandoned temple can be put to: for providing shelter and home for visually impaired kids. And I think Kalyan Das will also not be annoyed with us, seeing this magnificent building being used for a good cause. 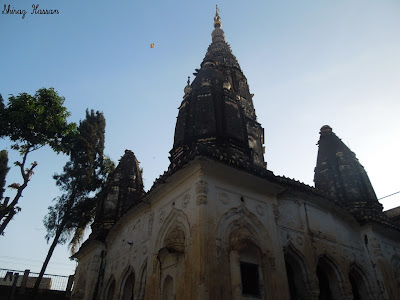 That said, it is also true that this architectural marvel is in desperate need of renovation and restoration work and the government must take notice of this need; this is not just an abandoned place of worship, but also an important heritage site of the city. And given the noble cause that it endorses now, this place serves to provide a huge symbolic impetus to people to open up their eyes blinded by hatred. 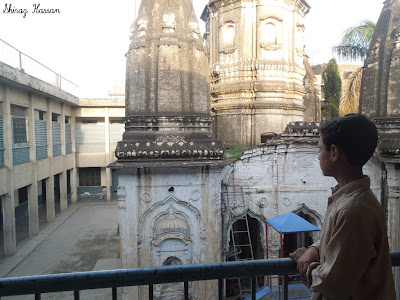 He writes about culture and heritage of South Asia, particularly Pakistan. He advocates rich culture of this land and tries to explore facts. Recently he was given an award from the Federal Ministry of Population Welfare for his article on population crises. Writers Guild also awarded him a Medal of excellence for his work.
Read More Share
Sri Lanka’s Pinnewala for Elephant Riding
Experience India’s Gold & Glittery Kingdom of Kitsch