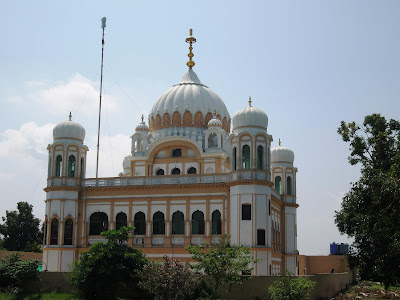 You can divide a piece of land but you cannot divide a belief. This was my first impression when I reached Kartarpur, a historic and sacred place, located just three kilometres away from the Indian border in the north-eastern city of Narowal, in Pakistani side of the Punjab.
Kartarpur is the city of Baba Guru Nanank Ji, the founder of Sikh religion. He is equally respected by Muslims and Hindus. But why I decided to visit Kartarpur? This was the question I asked to myself many times even during the journey. But when I reached there, I finally found the answer.
My journey started from Lahore and it was one of the most exciting journeys of my life. It offered some wonderful natural views. Both sides of the road were adorned with lush green fields of rice crops. It was a single lane road and there wasn’t much traffic during early morning hours, so the journey was quite relaxing and amusing.
Finally, I reached Narowal in some two and half hours. The road from Narowal to Shakargarh sub-district, where Darbar Kartarpur Sahib is located, is a newly-built double road so I reached there in half an hour.
Gurdwara Darbar Sahib Kartapur is about 100-km from Lahore and 180 Km, from Nanakana Sahib via Lahore. Before the Partition of 1947 it was part of district Gurdaspur but later became part of District Sialkot. But then the Sialkot was bifurcated and Narowal carved out as a district. It is also called Dera Nanak Baba.
There is a nearby railway connection which is named ‘Darbar Sahib Kartarpur’ on the Lahore-Chak Amru line.  On the Indian side it is opposite to: Village & Post Office, Police Station Dera Baba Nanak, Tehsil Batala, Distt. Gurdaspur Dera Baba Nanak is 54 Km from Amritsar, 35 km from Batala and 39 Km from Gurdaspur 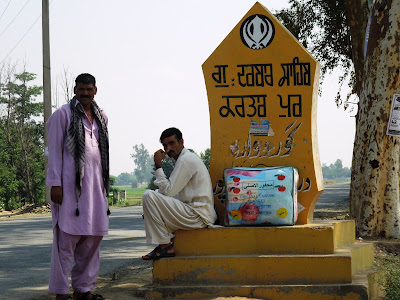 The gurudwara (Sikhs’ temple) is located next to a small village called Kothay Pind on the west bank of the Ravi River. The original abode established by Guru Nanak was washed in floods.
The present gurdwara was originally built at a cost of Rs.1,35,600, from funds donated by Sardar Popindar Singh, the Maharaja of Patiala.  It was repaired by the government of Pakistan in 1995 incurring expenditure in millions of rupees. It has a spacious and beautiful building.
The gurudwara at Kartarpur can be seen from another gurudwara located across the border in the historical town of Dehra Baba Nanak in India
From the main road to the village where this gurdwara is located, upon turning towards Gurdwara Kartarpur Sahib, one experiences being close to the nature. The beautiful sight of green fields welcomes you.
The village kids running around, the bull-carts moving slowly on the road. Mud houses, tube-wells drawing water to irrigate fields and then you will see the white structure of the gurudwara standing silently amid green fields and under a blue sky.
This was the sight I may never forget. I felt like that a dove is sitting among the fields or a ‘father’ is standing tall in the middle looking for his lost and estranged sons. 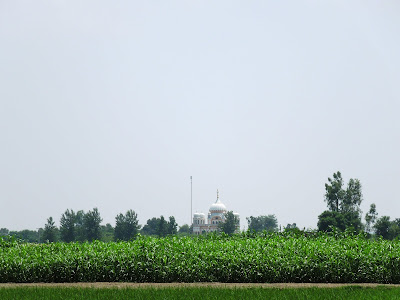 Unlike other holy places of Sikh religion in Pakistan, this gurdwara is one of its own kinds, especially, because of its scenic location. According to the Sikh history, Kartarpur is the historical place where Baba Guru Nanak Ji departed from this world on 23rd Assu, Samvat 1596 (22nd Sept. 1529 AD).

The history of Kartarpur is very fascinating. According to Sikh historians in the year 1520, Mughal King Babar attacked India. His troops slaughtered thousands of innocent civilians. Women and children were made captives and all their property looted at Amiabad. Guru Nanak Sahib challenged this act of barbarity in strong words. He was arrested and released, shortly after Babar realised his highhandedness. All the prisoners were also released.
After the release, Guru Nanak Sahib settled down at Kartarpur city which was founded by him in 1522 and spent the rest of his life there (1522-1539). There started daily kirtan and langar (free food for the poor) was introduced. Knowing that the end was drawing near, Guru Nanak Sahib, after testing his two sons and some followers, installed Bhai Lehna Ji (Guru Angad Sahib) as the Second Nanak in 1539, and after a few days passed onto Sachkhand on 22nd September, 1539.
According to Sikh history when Guru Nanak died, Hindus and Muslims disagreed on how to perform his last rites. A samadh (Hindu tradition) lies in the Gurudwara and a grave (according to Muslim traditions) lies on the premises as a reminder of this discord. 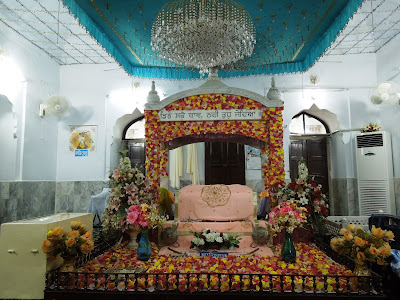 When it became clear that the death of Guru Nanak Dev was near, a dispute is said to have arisen amongst his followers. His Hindu followers wanted to cremate the remains as per Hindu tradition, while his Muslim followers wanted to bury the body as per Islamic traditions.
Nanak brokered a compromise by suggesting that each group should place a garland of flowers beside his body, and those whose garland remained fresh after three days could dispose of his body according to their tradition. It is said that the next morning, upon raising the cloth under which the Guru’s body lay, only the flowers shared between his followers were found. The Hindus cremated their flowers whereas the Muslims buried theirs.
There are historical references that Guru was against division of society on the lines of Muslims and Hindus (and Sikhs). Guru insisted that both Muslims and Hindus should observe the values of the respective faiths and that leading truthful life was important. Muslims treated him like a ‘murshad’ and the Hindus referred as the guru.
Sikhs believe that since Guru Nanak never tolerated divisions on the lines of religions, Kartarpur can’t be divided. You can’t keep it in a sectarian way. This aspect was well demonstrated in 1947 when Sir Ceril Radcliffe drew boundary-line between India and Pakistan. According to June 3, 1947 division plan the whole of Gurdaspur had gone to Pakistan. That meant Kartarpur going deep in the Pakistani territory. But the plan didn’t work and had to be amended. Now the District of Gurdaspur was bifurcated and the line that bisected Kartarpur finally worked — hence two of the temples going to Pakistani side and one remaining in the Indian. 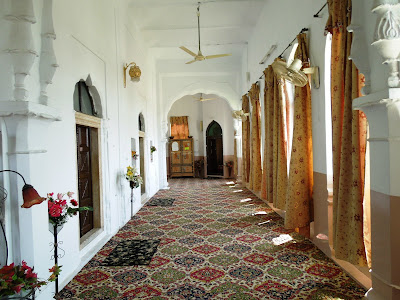 The plan worked but Kartarpur remained abandoned for 56 years and wild shrubs have grown all around its building, just like the political animosity between the two countries.
Later, Both India and Pakistan governments reached an agreement to build the corridor from Dera Baba Nanak to Kartarpur Sahib, about 4 kilometer distance, sometime in 1998, in order to enable the Sikh pilgrims to visit Gurdwara Kartarpur Sahib in Pakistan without visa or passport. But there has been no progress in that regard and both the sides are to be blamed for that officialdom. Various organisations had been taking up the issue for the construction of the corridor.
Sikh devotees often gather near border fence and offer prayers while looking at Gurdwara Kartarpur Sahib in Pakistan. The Border Security Force has specially constructed ‘Darshan Sthal’ by providing binoculars to the visiting devotees for a clear view of the gurdwara.
No doubt it is a high time when Kartarpur Dera Sahib Gudwara could play a vital role for a long-term peace in the region, as some experts say that Kartarpur-Dera Sahib can be used as corridor to peace in the region. 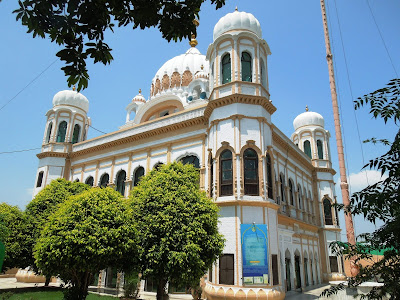 Sixty seven years has passed since the Partition and finally India and Pakistan moved one step ahead toward peace. Recently the foreign ministers meeting in Islamabad regarding visa liberation may be remembered as a landmark but it is not just enough. We need to move further close and should welcome each other with open arms. It is time to make your voice heard since peace alone could end hatred that has been growing over the years. This is the cause we all should advocate.

This article was originally published in monthly The Rationale
Shiraz Hassan

He writes about culture and heritage of South Asia, particularly Pakistan. He advocates rich culture of this land and tries to explore facts. Recently he was given an award from the Federal Ministry of Population Welfare for his article on population crises. Writers Guild also awarded him a Medal of excellence for his work.
Read More Share
First Taste of International CES 2013
7 Top Sites to Explore in New Zealand’s North Island