So I’m riding in a bus through Tennessee on my way to Miami Bay Beach. It’s nice and green. Mountains everywhere. The 6 lane freeway is flowing smooth and fast. The AC is blasting on the bus. A line of Lamborghini’s zips past. Everyone is staying in their lanes. We stop at a real rest area for a pee and a snack… … oh wait. Are we on the left side of the road? Is that sign in a different language? And did my driver nearly get in a fight with a passenger.  No, it’s not Tennessee, it’s actually Malaysia, starting in Kuala Lumpur. (above)
I’m surprised at how modern everything is. Subways. El-trains. Monorails. Roads that are actually wide enough for cars to go each way. Bullet trains. High rises. Shopping malls with all the boutique stores. A movie theater showing Iron Man 3 (for $4 or $7.50 in 3d). (I almost went but it didn’t time out right!) A surprising lack of smokers. And just about the most diversity I’ve ever seen. When I got on the subway in Kuala Lumpur (KL) the cross section of Malays, Indians, Chinese, Muslims, folks in shorts and T-shirts, in mini-skirts, the combo was pretty awesome.
I landed at the airport and it was as nice as any I’ve seen. I rode a bullet train into town.  I spent my one day in Kuala Lumpur going to the Batu caves, which are a holy Hindu sight with 260 stairs and the largest statue of Murga in the world. There’s also a Dark Cave that has a good eco-tour with a great guide who tells you all about it.
The rest of the day I spent in and around the Patronas Towers. Eventually going up to the sky-bridge and the 86th floor observation deck at sunset. It was cool to be able to have a view of the city, and the mirror image building that you’re in which usually you can’t do that from a big observation deck. 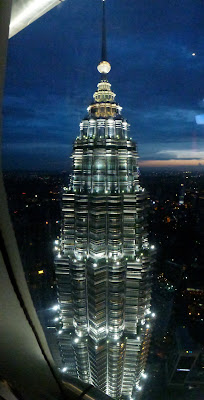 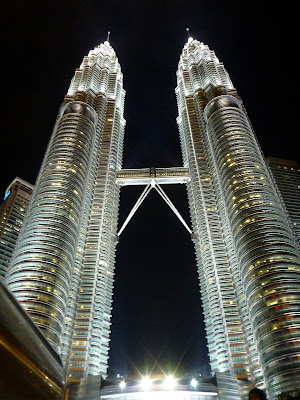 Officially Malaysia is an Islamic country, though there is freedom of religion, so there are many Hindu, Confuscionists, Taoists and even some Christians too. It’s the first place I’ve been that had a sign “No Indecent Behavior” and a silhouette of a couple kissing on the subway. And at the beach. And the national park. Seriously: DO NOT KISS each other. Jeez people. Way to risque! 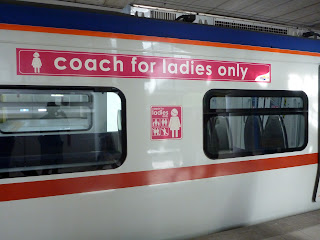 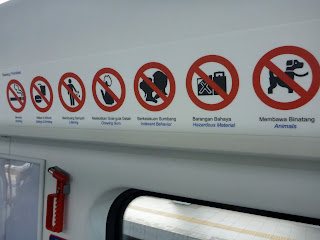 I took a bus up to Georgetown, which sort of feels like New Orleans. With tight streets and colonial archetecture, albeit British and not French. There are tons of flop houses, bars, reggae places and things to do. At first I thought: hmmmm, not so sure about this, it feels kinda junky. But it grew on me fast. Especially when I found a private room with AC! and fan! and bathroom! for $15USD! wooo! It ain’t a palace, but that AC is cranked!
Met some folks who are biking from Germany to Australia. Yep. And another biker going from Indonesia to Japan. Biking. Crazy! That’d be an adventure. It was fun to drink Tiger Beer and swap stories.
And we also had Nyonya food. It’s a local food that exists pretty much here and is HOLY COW GOOD!! Really tasty. Panang (the island Georgetown is on) is known for it’s awesome food. I’m looking forward to trying more.
TOday I rented a scooter and cruised to the National Park. The scooter guy was this cantankerous Chinese/Malaysian man who was so funny. He talked fast and was crassy. Enjoyed it. 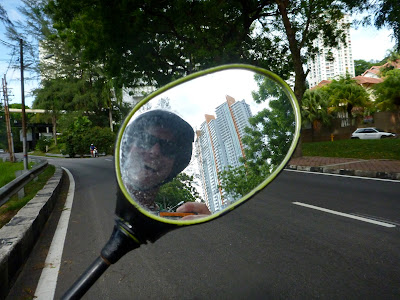 I met some other travelers and we hiked through the jungle for 1 1/2 hours to Turtle beach.  They’re under protection and being prepped for release). Then took a boat to Monkey beach (which had no monkeys). Hmmmm. Couldn’t swim to deep because of jellyfish, but it was beautiful nonetheless.
Malaysia is an interesting place. Looking forward to seeing more. Mountains and the deep deep Jungle.
Top photo credit: Mydestination.com.
Craig Ouellette

Craig Ouellette is a world traveling, independent filmmaker, and karaoke fiend. He has been to dozens of countries, made dozens of films, and sung more karaoke songs than he can count. He hopes the tales of adventure will entertain.
Read More Share
The Midwest Skies and Prairies in August
Five North American Hot Spots To Escape To This August