ART CARS. Brian would tell me about “art cars” before I went.  He’d say you could hop on an art car and ride around, or dance or what not.  But the description and the photos really don’t capture this strange and unique (I think) experience.Art cars are EVERYWHERE at Burning Man.  In fact, once you park your car or RV or motorcycle you are not allowed to drive it anywhere in town, other than if you are leaving again.  The only cars are Art Cars.  These have to be registered and inspected by the DMV (Department of Mutant Vehicles) and if deemed artsy and safe (enough) they are allowed to drive at 5mph or less down the roads, the playa and all around.

What constitutes and art car? Well… 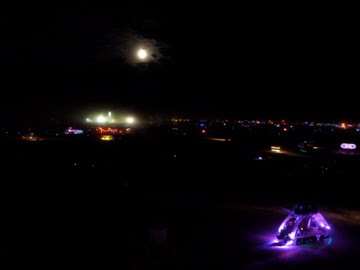 The giant, fireshooting octopus.
golfcarts covered in furry carpet,
Is that a 2 story unicorn with a dance dome and fire shooting out the front? 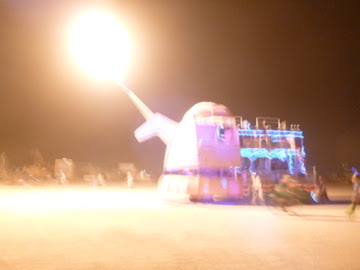 A dragon (or is that a centipede) type car with multiple segments.  There were two of these that would chase each other around like giant snakes, and at night it was really cool. 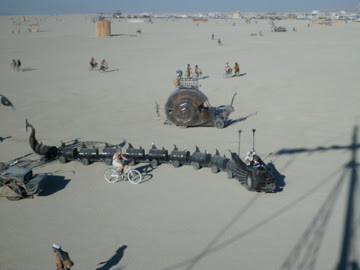 A sail barge like Jaba the Hutt’s from Jedi. A walking beast, that had no wheels and shot fire (I never saw it walk, but it did). One looks like sculpted ivory (of course it’s not), over an old schoolbus with a slide on the side.

Is that a giant dune buggy drag racer?
Robot Heart was a 3 story beast with a giant, you guessed it, pulsing light heart and huge speakers
There was a billowy whale
A giant snail
A space shuttle
what looks like a giant fossilized dinosaur
A dayglow lounge
A wildwest saloon complete with inside and outside portions
And a 45 foot YACHT that would drive around on wheels.  (A real yacht!) 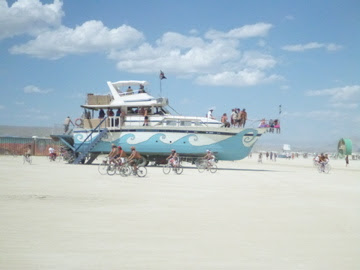 I’m not sure how these are built, or how they get brought here in the fist place.  But I’m glad they are!

I wish I’d taken pictures of all of them so I could remember, but then all I would do for 6 days would be take photos of art cars.  You never know what will come around the next corner.  It could be anything.  From the size of a chair to 60 feet long.  Who knows.  In theory you can hop onto most any of them and ride around, dance, drink, and hop off where you want.  But don’t think they go in any patterns or any logical routes.  It’s wherever the driver would want to go, and that might not be where you want to go.  Either way, it’s a blast!

Yep.  It’s called Burning Man.
They burn shit.
Lot’s of it.
Big things (the Man, Wall street, the Temple)
little things.  Hundreds of things.
MUCH of the art out in the Playa was burned on Thursday night.  As in, 30 or 40 sculptures all at once.  I saw the glow and smoke, but that’s when I was trying to honor my DJ offer from the slave auction.

It’s quite a site to watch things burn.  As you get towards the end of the week, more stuff goes up in smoke.  But it’s not all willy nilly.  Anything large is “sanctioned” and is monitored.  They have Black Rock Rangers (volunteers) and the fire department set up a perimiter.  (Keep in mind it’s not a fence or any actual barrier, and people would run across the space, sometimes streak across.  I’m not sure what happens when they get caught…they’re probably just put back in the crowd unless they do it a lot.). 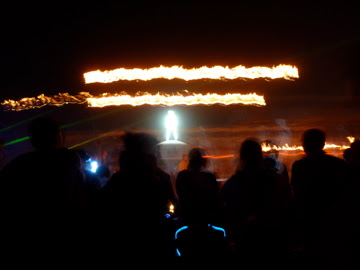 Once the barrier is set, people start to gather round.  It all seemed random, people would say “Oh, they’re burning Inubis at 9pm”, “Wall street’s been postponed because of wind/problems/issues until 9 or 11 or tomorrow”.  Seeing anything burn, seemed to be a bit of a… “wow, what are those people waiting for?” and going to check it out.  Other than the MAN (Saturday night, show starts at 8pm (or is it dark?  Or 9pm?, or when the weather cooperates.  One year it was delayed 4 hours because of wind and dust).  The Temple:  Sunday at 8pm (or is it 9?  10?  This year was earlier than past years, but it was later than planned…:)  You get the idea.

Barrier’s set.  People have gathered around.  Glowsticks.  Lights.  Art cars make a wider perimeter, and with the exception of when the temple burned, all play their music, so depending on where you are, you will have a different mood and feeling for the burn.  Electronic.  Ambient.  Hip Hop.  Country (yep, some country).

Then there’s a spark, and FIREWORKS!  At least the big ones like Inubus (an egyptian styled statue), Wall Street, the large EGO letters, and the Man all had fireworks.  My first burn was Inubus.  I was impressed by all the fireworks.  Then the fire spreads and burns.  The show could be 5 minutes, or in the case of the Man 45 minutes.  It goes until the structure has collapsed and there is nothing left to fall down.  Then the barriers are lifted, and you race in…

THE RIVERS OF HUMANITY

This years Man was the tallest of all so far.  80+ feet including the base.  The crowd gathers an hour or more before hand.  I got about 10 feet from the front.  People had set up tarps and coolers.  The front folks sit down and you wait and chat and laugh.  Brian and I had talked about meeting up afterwards.  He said “It’s going to be nearly impossible.  YOu don’t understand the chaos after the man falls.” But we set a place to meet and he was off to photograph the fire conclave Burning Sensation.  (You can check out some of the photos here: www.ErzenDesign.com  http://www.erzendesign.com/burning-man-2012-night)

Around 8:30 the fire conclaves start to spin.  There are 25 or 50 of them, completely circling the man.  They have all worked on routines and shows for months or even the entire year for this 15 minute window.  Conclaves can have up to 50 people, including the safety folks, and she shows are pretty impressive.  Burn Academy (who I camped with) did “the Four Horsemen of the Apocalypse”.  They had folks on stilts, burning swords, girls with these burning frames on them.  It was really cool.  Burning Sensation (which was right next to them) did a sexy, salsa dance to start with (But they had burning staffs they encircled each other with), and there was a dude with a FLAMING WHIP!  Indiana Jones would be proud. 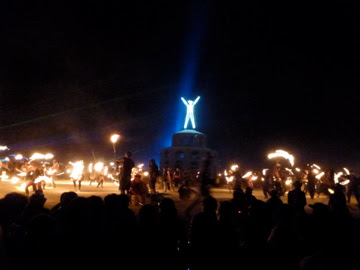 After the routines, the man goes up.  (if it were a movie, the Man would go up immediately, but it’s real life so there is safety prep and positioning required :). 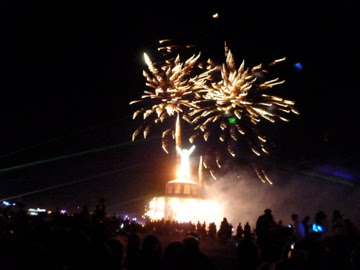 The man starts with fireworks.  TONS of fireworks.  Like 4th of July in Chicago over the lake fireworks.  Like Boston Pops fireworks.  (Okay, I’m exaggerating, but it’s an impressive show).  His leg starts burning first, and then it spreads.  Gets bigger and bigger.  Then there was a GIANT EXPLOSION that shot a fireball out and around!  The whole thing begin to burn so enormously that all the folks in the front got up and ran back and away, and the area where I was everyone stood up and were ready to bolt.  Huge smoke and dust tornadoes begin to spin away from the structure.  Everyone on that side must have moved, because the smoke and plumes of dust would have been nuts.

I shot a video of the whole thing.  It’s 25 minutes long, and then I stopped.  I think I should cut out some of the duller parts to give an idea of what it was in 3 or 5 minutes.  Being there is very different from watching a video though.

It’s funny that I think that.  I love movies.  I make movies.  But direct experience is still the best when it comes to things like this.  My words, photos, videos.  They give you a glimpse, albeit a contained, shortened, easier to digest glimpse.  But seeing the man burn (and all of these things) is different when you are there.  It’s like skydiving…the experience of it is TOTALLY different than watching videos.  Don’t get me wrong, I think the power of a good movie is that it DOES give you the direct experience, the emotions and fears and joys of the characters involved.  But that is movie magic, and rarely happens.

Back to the burn!
When the structure fell down there were a couple of standing pillars still burning.  Everyone was on their feet, wanting to charge in, but the rangers and firemen were keeping the mass of humanity back.  The throngs would pulse closer, but not break free…

…until the dam fell.

One person broke the line, another dude (naked!) charged in, and then the whole thing went.  CHAOS!  As 50,000 people stormed in towards a giant raging fire pit.  They fell in, dancing, cheering, and flowing around the burning madness.  It was very much still a fire.  (It burned through the next day, they always let these burn themselves out.  You don’t put them out).  The people flowed counterclockwise in a river around the man.  It was amazing.

The heat was insane.  If you were on the inside of the river, it was 5 feet between you and a 50 foot square of burning wood.  It was HOT.  Really HOT.  Blistering hot.  But if you had just one person between you and the flames it wasn’t too bad at all.  (I guess people make good insulation…hmmm, that’s a weird statement. :).  I don’t know how the naked guys and girls could stand being that close to the flames.    I ran into some friends from camp, snapped their pics, and just enjoyed the absolute insanity of the whole thing.  This was participation done burning man style.

It was all joy and joined humanity for one celebration.
For this moment the world was in perfect balance. 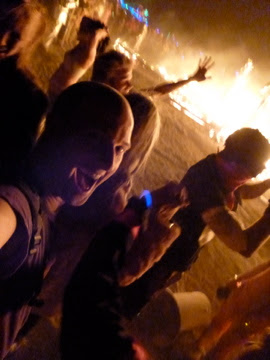 Craig Ouellette is a world traveling, independent filmmaker, and karaoke fiend. He has been to dozens of countries, made dozens of films, and sung more karaoke songs than he can count. He hopes the tales of adventure will entertain.
Read More Share
The Swedish: Bruce Springsteen’s Most Crazed Fans
Chaudhry’s “More Ghost Stories of Shimla Hills”