For the longest time I had been unable to fathom the fascination a dear friend, nay two of them, have long displayed for the dead. They’re both doctorates; I have often wondered if that’s grounds–and avid travelers, though many decades apart in age.

He, formerly a bureaucrat, currently a graver, plans nearly all his trots across India and the globe around beautiful cemeteries, writes about them even.  She, when not teaching English Literature to college-goers, plays tombstone tourist wherever she goes. While I have continually accused them of being macabre for their interest in the interred, they’ve always blamed my immunity to taphophillia on dread of death. 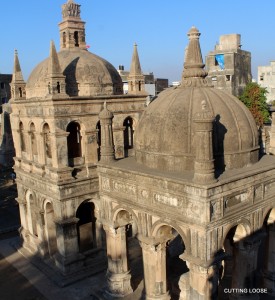 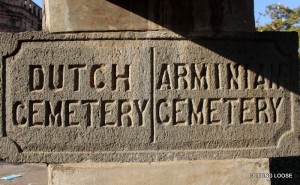 Then I went to Surat. Surat, previously known as Suryapur, is a city in the Indian state of Gujarat. It is the administrative capital of the Surat district. This textile and diamond-cutting hub is home to three cemeteries under ASI ‘protection’. Of which the Dutch and Armenian lots are joined at the hip and one hosting the English is a kilometre apart. All three hark back many centuries with the earliest interment recorded in the year 1579. 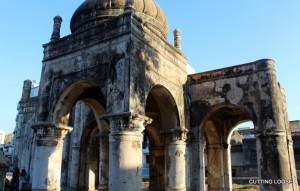 This distinction is held by an Armenian lady called Marinas, wife of the priest, whose remains rest just outside a forlorn looking mortuary chapel, the only super structure amidst hundreds of neglect-laden gravestones. This monument appears to be of later vintage, gleaned from the solitary sepulchre of Kalandar, an obviously once-important personage who passed on in 1695, it hosts within. 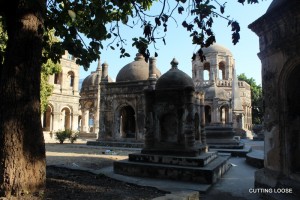 In contrast the Dutch Cemetery is teeming with splendid cenotaphs, obelisks and mausoleums. Most note-worthy is that of Hendrik Adriaan van Rheede (died 1691), a top-ranking official of the Dutch East India Company, who also has to his credit the Hortus Malabricus, a 12 volume treatise on the medicinal value of flora along the Malabar Coast from Goa to Kanyakumari.

The handsome octagonal-shaped double-storied structure with solid columns stands on a stepped plinth and has an encircling veranda. A carved wooden door ushers you into a frescoed crypt with a flight of steps leading to an underground vault and another up to a benched parapet surmounted by an enormous cupola. 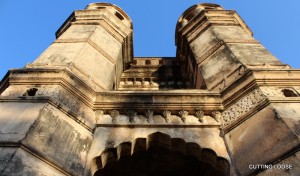 Rivalling this grandiosity are two extremely striking ones still upright in the English lot. George Oxenden (1620-1669) was the Governor of the Bombay Presidency in British-administered India. He had a beautiful tomb built for his brother Christopher in 1659. A decade later, when he himself succumbed to illness, he was buried beside his sibling and a loftier crown was raised in his honour. 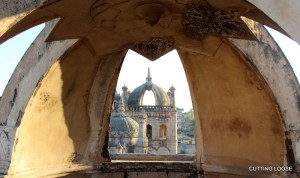 A flight of stairs takes you right to the top for a bird’s-eye view of all the other pinnacle-domed, arched and stucco-embellished sarcophagi dotting the sprawling cemetery. Including that of Gerald Aungier–he succeeded George Oxenden–a mere whisper away.  Though much less elaborate in comparison to his predecessor. 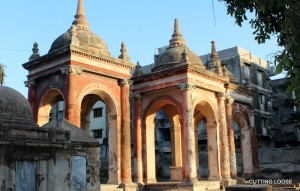 When the call (phone, not from above) came I had found it an annoying intrusion. Interrupting as it had an engrossing lesson resplendent with history, art, culture, and astounding aesthetics. It was the waiting cabbie wondering if I still inhabited the living world, unknowingly bringing to the fore sounds of life I had missed not at all. 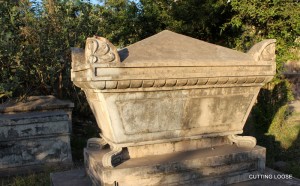 One of few tomb-chests in the English lot

Not once, in the many hours that had simply flown since I began strolling, peering, photographing, reflecting. The occasional path-crossing with kite-flyers, glue-sniffers, canoodling couples and caretakers notwithstanding, I had up until then been swathed in tranquility so rare that it was almost heartbreaking to have it come to an end. I can’t wait to return. To another. While still alive.

When she is not travelling, she is writing about it. Over the past decade or so, she has created an impressive writing repertoire for herself: as a columnist with Hindustan Times, as a book reviewer for The Tribune and as a contributor to travel magazines in India and overseas. Her work-in-progress, the documenting of colonial heritage along the Old Hindustan-Tibet Road, is an outcome of her long-standing romance with the Himalayas.
Read More Share
5 Cultural Must Stops When In India
Quirky Things Only Found in New Zealand