To be honest, it was with some trepidation I accepted an invite to experience a newly-minted wellness resort in Vishakhapatnam, for short, Vizag.  Visakhapatnam is in the Indian state of Andhra Pradesh, on the Bay of Bengal. It’s known for its many beaches, including Ramakrishna Beach, the Kursura Submarine Museum and it also has lush rolling hills. There’s a temple here as well: the Kali Temple and the Visakha Museum, an old Dutch bungalow which has maritime and historical exhibits.

The hour it took to get from the airport to Rushikonda where it is located was probably the longest, my mind playing over and over again an earlier encounter, elsewhere. 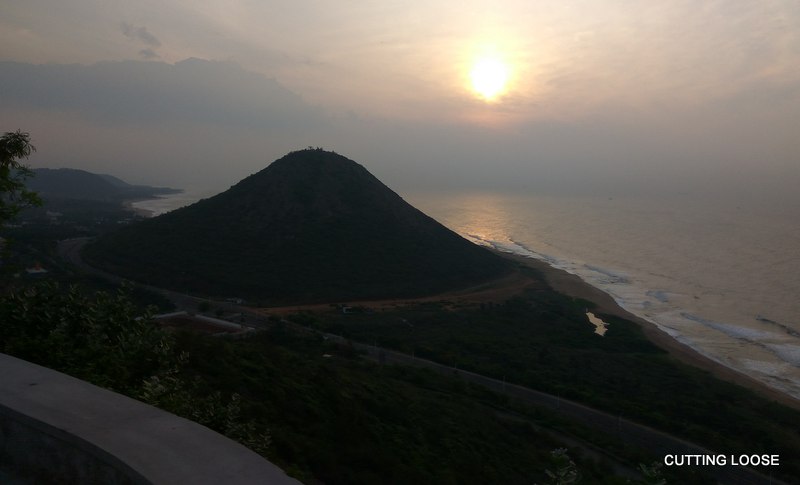 Though many moons ago, it had left me a tad disenchanted with the space. Partly, I gather, from not knowing all it entailed, partly from a definite lack of finesse (not to be confused with luxury) of approach. Privacy, I recalled, was another casualty. Most vivid of memories was the discomfort persistent hunger pangs invited. Yet here I was, ushering myself into the yawning vestibule at BayPark for another spell of naturopathy. Some of us just never learn.

A sense of dejected déjà vu, the kind kindred night owls will surely understand, trailed me the following morning, having been startled awake at 5am by a strident bedside phone. I lumbered out of bed and into the balmy outdoors for the mandated walk, as briefed by staff at time of check-in. 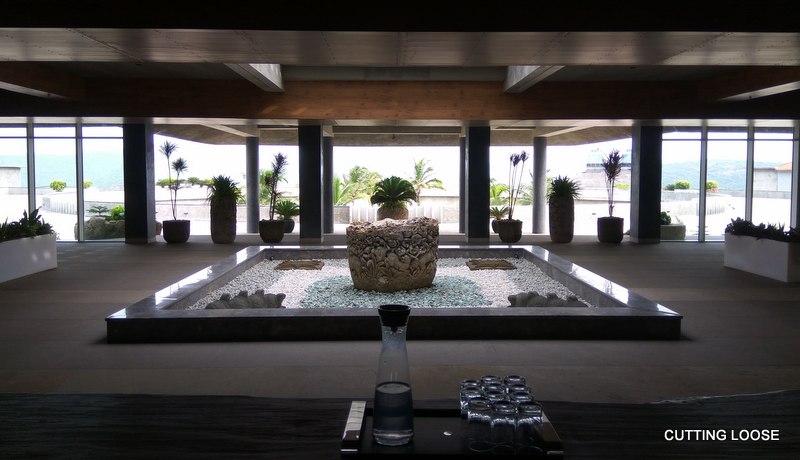 My arrival the previous evening–after a rain-delayed flight ex-Chandigarh barely making the onward connection from Delhi–had coincided with designated dinner timings; no time to explore. Here was my chance to get a real good look at what I had signed up for.

Besides, my consultation with the team of clinical professionals, helmed by Dr SN Murthy, naturopath extraordinaire, was a good couple of hours away. In any case, I was in no rush to be admonished about consequences of lifestyle excesses.

For the moment, I was simply going to revel in the show of bravura daybreak from atop a hill overlooking the Bay of Bengal was bringing to light. An uninterrupted stretch of silvery sand abutted NH16 as it snaked along the coastline sandwiched between lolling ocean waves and swells of the Eastern Ghats.

It connected a blurry Vizag town to the right with Bheemili village in the distant left. The sun, peeking out from behind a hummock rising from the edge of the sea, suffused surrounds with a golden hue. Ricocheting off picture-windows of 70-odd well-appointed rooms, sea-facing all, currently ready for custom.  Walk all but forgotten; I gazed out at the splendor of nature’s play before me, till a growling stomach had me hurrying in for breakfast.

I made my way to the massive window-lined dining room where cheery aqua and white seating offset the burnished grey of handcrafted walls. Courteous staff escorted me to my table-with-a-view and returned soon after with a glass of fresh juice.

To my very pleasant surprise, this was followed by a round of Besan Chilla. Presuming it to be my last pre-therapy treat, I greedily wolfed it down and trotted off in search of resident clinicians. Dr Varsha awaited; armed with my recently recorded vital statistics, and the embarrassing findings of a state-of-the-art Body Composition Analyzer. She patiently walked me through the results, understood my medical history, responded to queries, and then tailored a purpose-driven three-day regimen. 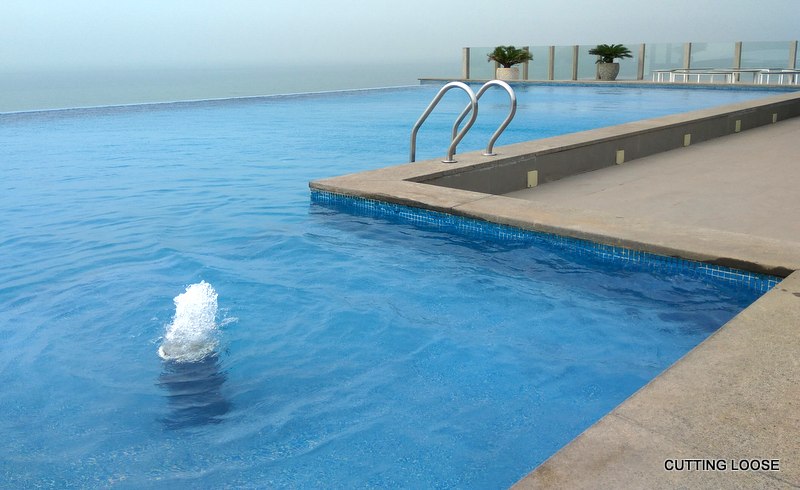 Designed to keep me on the go from 5am to 7pm, it necessitated that really early morning walk I continue to dread. It included yoga kriyas and asanas under the eagle-eyed ministrations of Dr. Dave, a sprightly septuagenarian, whom I can’t thank enough for fixing a months old nagging pain in the right leg.

Healing therapies, aqua Zumba in the delightful infinity pool, and another round of yoga and walking neatly filled the rest of the schedule. Punctuating it regular intervals were energizing beverages like herbal teas, juices, broths and copious amounts of infused water.

A mild-mannered Rubina, entrusted with the spotless healing hub, set the tone for her team of knowledgeable, nimble-footed healers calmly going about the work at hand. Not once through a flurry of rejuvenating massages–hot stone, sand, salt–and hydro-therapies was there a slip in warm professionalism.

If anything, it was the air conditioning that left me constantly cold. Another recollection of this busy albeit enjoyable schedule was the lack of concern with matters sartorial. Unsurprisingly, as I alternated between yoga-wear and paper lingerie for a better part of my stay! 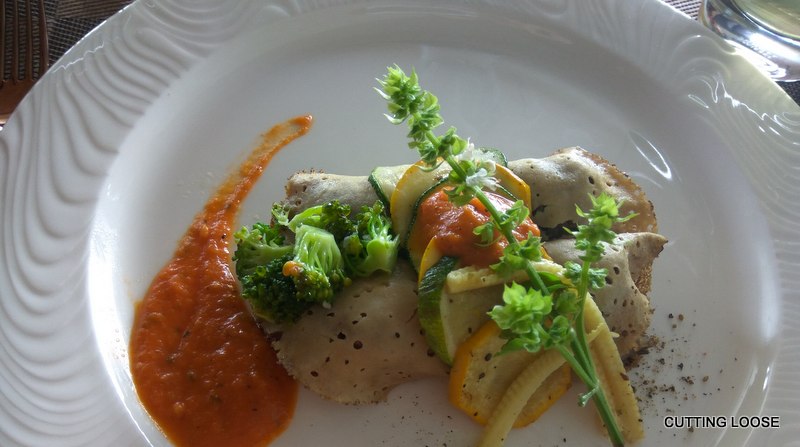 Still, it was nice to eventually smear on some lipstick at dinner-time, if only to fete the magicians who administered the kitchen. Unable to shake off unpalatable memories of a previous experience, I must confess to continuously agonizing over what to expect by way of food.

It turned out that it was totally unnecessary. Countless trials, research, and innovation supervised by doctors, nutritionists, dieticians and chefs resulted in some of the most filling, flavourful, and aesthetically appealing vegetarian meals I was likely to eat any time soon.

Chef Rajeev Bali’s Crunchy Pear Salad, Enchiladas Verdure and Cocoa Orange Mousse, each one of them at or less than 200 calories, are clearly what health-food legends are made of. 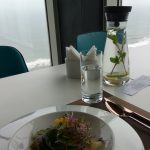 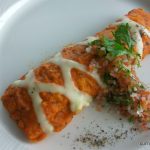 When she is not travelling, she is writing about it. Over the past decade or so, she has created an impressive writing repertoire for herself: as a columnist with Hindustan Times, as a book reviewer for The Tribune and as a contributor to travel magazines in India and overseas. Her work-in-progress, the documenting of colonial heritage along the Old Hindustan-Tibet Road, is an outcome of her long-standing romance with the Himalayas.
Read More Share
Off-the-Beaten Path in Thailand’s Chiang Rai
A Happy Attitude May Add Years to Your Life