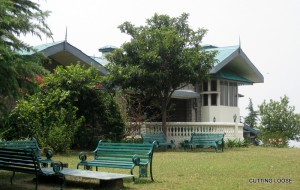 Undoubtedly Dharamsala’s most charming heritage, it is set at the top end of a large family-owned tea estate, far from the madding crowd.

It was once owned by adventurers Robert Shaw, first European to set foot in the Central Asian city of Kashgar, and John Younghusband. The tea gardens are said to have been planted by them in the mid-1800s. The White Haven Estate–oozing character & equipped with the most enviable views–has been with the owning family for over 100 years now. 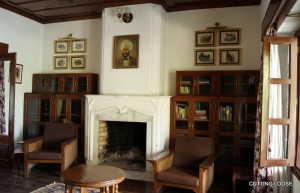 A short, well-marked forested path just off the main road will bring you to this pretty, flora-rich colonial manor. Still, it would be prudent to call ahead for directions.

Gleaming white balustrade-flanked steps usher you up to the front porch, and into the wood-floored hallway and library beyond. Where, you are likely to be greeted by the chatty manager of the property, Mr Sidhu–Sid to friends–a font of local information. And cartographer of any number of accurate hand-drawn maps of the surrounds, were you to ask!

The under-stated and spacious rooms in the main house are complemented by two cottages out back, and share a large shady lawn with excellent views of the valley & Mcleodganj.  Replete with balconies and cozy sit-outs at every turn, the place has been thoughtfully crafted to endlessly soak in the verdure or gawk at the snowy Dhauladars.

The food served is delicious and freshly-prepared; ergo, the kitchen staff will need a heads-up of arrival time and meals required. Unlike other hotels, there may be very little on offer, other than beverages, in case you show up unannounced.

When she is not travelling, she is writing about it. Over the past decade or so, she has created an impressive writing repertoire for herself: as a columnist with Hindustan Times, as a book reviewer for The Tribune and as a contributor to travel magazines in India and overseas. Her work-in-progress, the documenting of colonial heritage along the Old Hindustan-Tibet Road, is an outcome of her long-standing romance with the Himalayas.
Read More Share
Things to do Guide for the Cape Verde Islands
The Winners of the 2014 Travel + Leisure Smitty Awards