Given that the minimum practice period at The Ashtanga Yoga Research Institute is 1-month, it behooves most students who come to Mysore to find lodging at a home rather than a hotel. Fortunately, for those who’ve spent the bulk of their rupees on the flight and studio fees, a network of houses, apartments and rooms are available for rent in Mysore.

Two to three ‘brokers’ (Shiva, Murthy) cater almost exclusively to students and can help you find a room if you haven’t already lined up a place through friends, or, if you’re a regular visitor, simply rented out a place for a year.

The upside is that rent is cheap by Western standards (my monthly rent here is less than what I pay for a week in California); the downside is you can expect quirks (my current place has hot water in 1 of 2 bathrooms & an Internet connection only accessible from the balcony & I get clean water delivered). Likewise, atmospheres can often feel very collegiate and more often than not you’ll be sharing a place with others.

My previous trips, I lined up a rental at one of the inn’s in town for a couple of nights to get the lay of the land and find a place. This trip, I took the room of a friend who left a couple days before I arrived, then found a place more to my liking 6 weeks in. Other friends leave Mysore with reservations for the next year in place. Some apartments and rooms are fully furnished with equipped kitchens–others contain little more than a bed and a hot pot (if that). Several Indian families rent rooms to students as well and I’ve friends who’ve lived almost as an exchange student might.

As far as provisions, everything you need is readily available here at stores both big and small. Common purchases include bedding (again, not too expensive) and kitchen items that you can store for your return: Another thing people do who come every year or two is to get storage trunks and fill them with such household items that will be a pain to take on a plane. For a minimal fee you can store them locked to be retrieved months or years later to set up house anew. Likewise, it’s not unusual for leaving students to bequeath everyday items to new arrivals. Houses and rooms are at a premium now (early January, a busy month) but eventually everyone seems to find their place. The key (as with practice) is to both stay loose and flexible about your plans and plan ahead a bit. 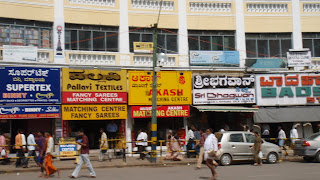 Deborah's many performance credits include an appearance at the 2006 Millennium Music Conference, the RockerGirl Magazine Music Convention, IndieGrrl, at several of the Annual Invasion of the GoGirls at SXSW in Austin, TX, the Harmony Festival and 2009's California Music Fest, MacWorld 2010, Far West Fest and many other venues and events. She toured the Northwest as part "Indie Abundance Music, Money & Mindfulness" (2009) with two other Bay Area artists, and followed up with "The Great Idea Tour of the Southwest in March 2010 with Jean Mazzei.
Read More Share
Mangia Italia – Food Etiquette of Italy
Snorkelling, cycling and safaris in Mombasa