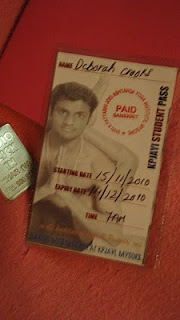 I’ve written a lot about Ashtanga elsewhere* so I forget that not everyone knows what I’m up to in Mysore or knows what Ashtanga is. This post is intended as a very brief, basic and personal overview of a vast and deep practice.

This is my third, and longest trip (at 3 months) to Mysore, to study Ashtanga Yoga as developed by Sri. K Pattabhi Jois (1915-2009) at the KPJ Ashtanga Yoga Institute. I was introduced to this form of asana practice more than 10 years ago, and with the exception of two breaks of about 6 months each (taken due to injury or distraction), I’ve been in a yoga studio from 3-6 mornings per week. Mysore-style Ashtanga is a self-led practice of a specific series of postures sequenced by Jois with the guidance of his extremely influential teacher, Sri Tirumalai Krishnamacharya (1888-1989). In Ashtanga, every pose in each series is linked by an inhale and exhale, and held for between 5-10 breaths, before proceeding. A moving meditation of sorts—once you start, you don’t stop til you’ve completed the finishing poses while, if done correctly, holding a steady gaze throughout—it’s far from simple and tends to provide one with many, many life lessons.

While regular practice results in some very tangible benefits including physical fitness, it also teaches focus, discipline, reveals the contents of one’s mind, as well as the extent of one’s fears and beliefs about what’s possible, all the while serving to align one with one’s true nature. Practice provides a huge and often sobering mirror. Most of all, Ashtanga has taught me to show up for my life even when I’ve felt like crap, or been too busy, or simply felt lazy. I’ve practiced on days when I’ve been sick and when I’ve been well, during 9/11 (when Jois happened to be teaching in New York), on music tours, amidst family crises, work and vacation. Some days are great, some suck. It’s called practice for that reason. Somehow, it never fails to invigorate and inspire me on some level.
In Mysore, the lessons of practice are magnified that much more. Being in India, the energy of the studio, the incredible ethic and integrity of Jois’s grandson and current Institute Director Sharath Rangaswamy and the combined force of Ashtanga’s more motivated students —minimum enrollment time is 1 month so it requires serious commitment and willingness to one’s ‘regular’ life to get here—conspire to intensify an already potent practice. 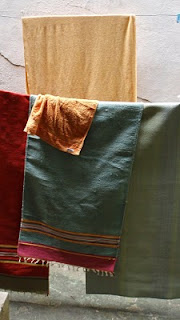 There are about 150 students of varying levels and from all points of the globe practicing at the Institute right now (this number varies between 100 and 200). Students, most of who rent out houses or apartments for their stay, practice in the morning and then do their own thing. Everyone’s experience is tailor-made. I was pretty hermit-like outside of the studio during my 2004 visit (a first trip to India and practicing with Jois being a lot to process). My second trip felt like a social whirlwind and found me forming a band with some other musician-yogis. This trip, thus far, I have fallen into a rhythm of yoga and Vedic chanting classes at the Institute, and Carnatic voice lessons. In between, I’m practicing guitar, writing, volunteering a bit for Operation-Shanti, enjoying the great South Indian cuisine, sight-seeing and getting to know the other students.
The student body provides an amazing cross section of the globe: Canadian, Australian, Brazilian, British, Croatian, Mexican, Italian, Russian, Japanese, Malaysian, Taiwanese, Polish, and Indian students practicing side-by-side. Most of the students are teachers of some level back home; however, a few folks show up in Mysore having never previously tried a yoga class.
So on any given day in the studio, I may be surrounded by someone just learning the opening poses and advanced practitioners completing 3rd Series (there are 5 Series of Postures and Sharath is the only one to master all 5). You get more poses added as you master each one in the series. Some students may get poses in quick succession; others may be moved back to refine poses they need to improve. On the outside (there’s plenty going on on the inside), it’s a quiet practice: that is, it’s not set to music and the teacher isn’t encouraging everyone at once from the front of the room. In fact words from a teacher are rare as gold in the Mysore studio, the main guidance given by Jois having been “practice and all is coming.” It’s a simple sounding tenant which Sharath and devoted students uphold and which I’ve come to believe says it all. If you commit to showing up, breathing and stretching your life and taking responsibility for where you’re at with that, something is sure to come up.

*I’ve written about yoga for a variety of publications and sites over the years, some of which have been archived at Ashtanga.com, a good site for learning more about Mysore-style Ashtanga, qualified teachers as well as finding books and videos about the practice.

Deborah's many performance credits include an appearance at the 2006 Millennium Music Conference, the RockerGirl Magazine Music Convention, IndieGrrl, at several of the Annual Invasion of the GoGirls at SXSW in Austin, TX, the Harmony Festival and 2009's California Music Fest, MacWorld 2010, Far West Fest and many other venues and events. She toured the Northwest as part "Indie Abundance Music, Money & Mindfulness" (2009) with two other Bay Area artists, and followed up with "The Great Idea Tour of the Southwest in March 2010 with Jean Mazzei.
Read More Share
Artisan Nature Uses 33 Essential Oils In Their Juice
About the Fabulous Food of Djibouti