Did you know Bethlehem is surrounded (on 3 sides) by a 27 foot tall segregation wall? Not a wall of choice, a wall put up by the Israeli’s. A wall imprisoning the Palestinians from the rest of the world. Trapped in the city of peace where Jesus was born. Trapped without hope. Trapped with fear. 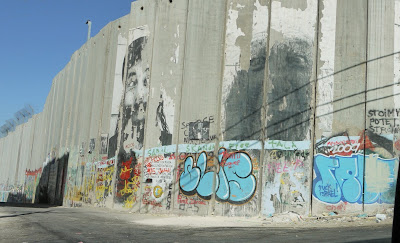 Can you imagine trying to leave your own city, only to be rejected because the people surrounding your city, decided that day, they didn’t want to let you leave, just because they can? This happens on a moment to moment basis, even when people are just trying to visit their family on the other side of the wall. The wall the Israeli’s decided to put up between your two homes, on your land. Seriously, take a minute to imagine this….

Did you know that Bethlehem has a 38% unemployment rate? No, it’s not because the people here are lazy. It’s due to their complete oppression and ‘imprisonment’.

In the United States, we hear, mostly negative news about Palestinians.

I would like to tell you something positive, from the bathroom floor of my hotel room. It’s 3am, I can’t sleep and I didn’t want to wake my dad in the other room

First of all, many of you don’t know this, but I am Palestinian-American, my father moved to the US many years ago. I was born and raised in Middle America, but my heritage is important to me. And I have always felt connected to Palestine.

Last June, I was visiting my family in Wisconsin. During that visit, I attended a talk by a man name Rev. Mitri Raheb from Bethlehem, Palestine. He spoke of the school, he has envisioned and built with the help of others. A school of hope amongst rubble and oppression. A school focusing on culture and the arts.

I thought to myself, no one is doing this. No one is focusing on the arts in the time of conflict. I love it!

When people are struggling just to survive, the arts can get pushed aside, but those of us, who are artists, need to express ourselves through art.

Arabic culture has a long and strong and important history of arts, music, visual art, poetry etc. Since 1948 when the Zionists took over this beautiful land and Palestinians were forced out of their homes, separated from their families, Palestinian art has diminished. This ongoing diaspora of the Palestinians has left the people without many necessities and thus the artistic culture of the people has dwindled.

When Mitri spoke to us in Madison, I met him and he invited me to give a talk to the students at his school in the West Bank, Palestine. I liked the idea, thought about it and put that thought in the back of my head.

Then, about a month ago, I decided to join my father on his journey to visit family (who live within Israel, and are known as Israeli Arabs politically, but are Palestinians culturally).

I told him, I wanted to visit places of peace within a land of struggle. So, he contacted Mitri and told him we were coming and, again, he asked me to speak to the students here.

Diyar is a consortium of many things, one of which is their school focusing on the arts. Teaching tradition, yet giving them the freedom of their creative minds to expand on the ideas.

They have a ceramics program, a jewelry program, glass, mosaic, music, documentary film making, performing arts, fine arts, graphic design, communications, Tourism management and more. It is a two year community college and like I said earlier, no one is doing this. It is an amazing place, with great teachers and wonderful students. I am completely impressed. They are empowering young people (especially young girls) with the freedom of mind, the creative mind. Guiding them with the power of artistic thought.. 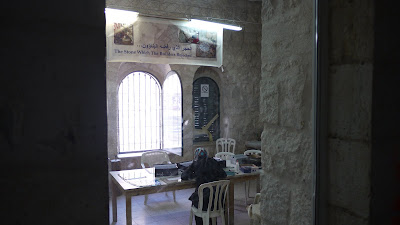 We arrived a couple of days ago, the school is in a beautiful old building, which was and still is a part of the Lutheran church, but the space has been transformed into an artistic oasis. Old arched ceilings, old stone walls, intermingled with modern architecture, glass and outdoor areas, which were filled with students playing music, studying and talking. This place also has a café and a bar, it has a gift shop, a guesthouse, an amazing gallery in a cave…It is quite remarkable and creates a beautiful aesthetic environment for artists. It’s even more remarkable because of the occupation they live under. 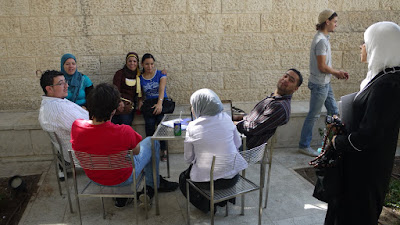 Yesterday, I gave a presentation of my work and my approach to it, about 30 students and teachers were there. It was a lively 2 hours, the students asked a plethora of really good and hard questions, they were critically thinking about what they had seen in the slide show. It was an amazing experience for me. I hope the students were inspired too. 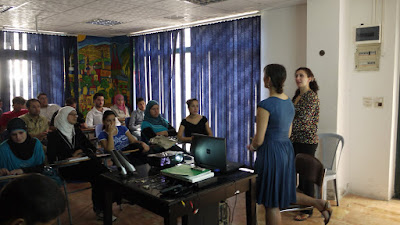 You have to remember, most of these college age students have never had the opportunity to take an art class before. This approach is unlike any other they have ever experienced and they are supported and encouraged by their teachers to continue on. They are continually exposed to the outside world, by bringing the outside in. They are literally surrounded by a wall and illegal settlements and it is very very difficult and sometimes not possible to leave. Remember, the unemployment rate in the area is 38%, well the students who graduate from here more than halved that. And to me, that is impressive and a great success. The arts can keep them alive, channeling their fear and anger into something productive and creative!

I am inspired to come back again one day. It is truly a place of peace and creative energy, amongst mass oppression.

For more on the school please look here. www.diyar.ps Samia Shalabi is a Seattle based artist & designer, yogi and traveler who has roots in the Middle-East, was raised in the middle-west and is drawn to India. She has a degree in geology, has traveled all over the world with a backpack, and believes in following her dreams. Samia does yoga most mornings, enjoys walks around Seattle, loves to laugh, and daydreams about where to travel next. She is working on a movie shoot in France.
Read More Share
A Chat With Sweet Potato Specialist from Peru
What Do Foreigners Think About Russia?