Syria is not a country most folks just stroll on into. We had to send to the embassy in DC to get a visa and swear we had never been to “occupied Palestine.” Where the heck is that?…oh Israel. But when we got to the border the lines were 8 hours long so we ditched our cab and walked behind buses and vans through 4 checkpoints without being stopped. We figured that we had a visa and the worst case was several years in prison but they never actually saw us so there we were on the road to Damascus.

Ahhh, Damascus at Easter. We knew some Christians in the old city and they told us that Easter was a huge deal and the place was full with revelers. Hum… well, there are a few Christians. Very few, and the city was bustling, but Easter is not a big Moslem holiday. From a hilltop at night we could see the city the mosques lit up in green and the churches in blue. Very little blue.

The women in Syria and Jordan have to keep their heads covered except for tourists and the few Christians. Many have to wear long robes and then there are all the variations. Some women are completely covered in black with a little fly screen to see out. I don’t think the bug problem is really that bad. To us it seems a kind of insanity to punish a woman by putting her in a black body tent in the desert. Arabs make all sorts of excuses, like the women have really sexy clothes underneath but there is no question that this is geared to reducing a woman’s humanity.

We soon discovered why they are not big drinkers in the Arab world. The drinkers have all been killed crossing the street. It is truly a life threatening adventure to do this. It was the only time we felt at all unsafe.

The old marketplace, the Souk, is the stuff of legends. Roman gates flank the market which has been in the same place for at least 3,500 years and possibly twice that long. Here you see heaps of spices and gadgets, vegetables, meat, and clothes from the full black burqa to rhinestone underwear worn by hookers or hooker wannabes. This place is fully authentic.

We hung out with some locals and their hospitality was lavish and generous. We went to one restaurant billed as the best in the city and it was indeed grand. It was a rooftop garden with trays overflowing with Arabic food. Three of us ate like caliphs and the bill was about $35. Syria is a bargain. 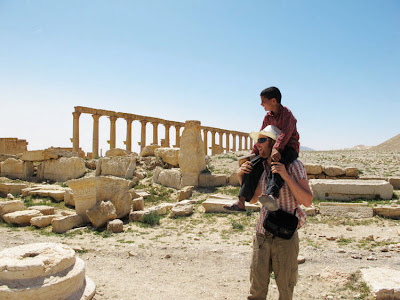 We took a three-hour drive to Palmyra, a city as remote in Roman times as now. It consists of a mile long paved road flanked by temples, theaters and endless rows of columns (Romans were simply nuts for columns). This place made its fortune as a trading center but we were hard pressed to imagine how such wealth could accumulate in the desert. I guess we have Vegas but back then it was so hard move stuff. Before ships went to the orient the trade route was surging with camel trains bringing the wealth of the east in trade for the gold of the west. Palmyra was basically a port of call in this sea of sand. The Roman ruins in the East are far more complete than in Italy because of they are so remote.

One of our goals was to go to the Damascus Gate restaurant billed as the largest in the world. 6014 seats, staff of 1800, 40 million dollars, 400,000 sq ft. We got there and a real nice fellow took us on the grand tour. It looked like a stage set from a Bollywood film but built by inept children. Bad stucco and colored lights, plastic chairs and a few palm trees. In the whole place there might have been 2,500 seats and there were only about 30 customers. To us the joint next door looked far bigger and a lot nicer. There were huge billboards proclaiming its Guinness recordness but it had obviously been tarted up for the pictures and all the good furniture had been repossessed. The center piece of the restaurant is a meteorite about the size of toaster. We absolutely loved this place.

South of Damascus was Bosra a Roman stronghold featuring the finest intact amphitheater from ancient times. It looked exactly like a stadium of today with nearly every stone block is still in place. The town surrounding it is so complete that people continue to occupy the Roman buildings.