I heard night fall before I saw it. A cacophonous riot of insects alerted me to this daily occurrence. Sleep came soon after as there was nothing to do once the sun set. A bit of stargazing, watching the stars slowly show their faces then suddenly bursting forth at some heavenly signal unknown to me. That was my first night on Malekula. Malakula also spelled Malekula, is the second-largest island in the nation of Vanuatu, in the Pacific Ocean region of Melanesia. There is an urban myth that the name was coined by James Cook, and was apparently derived from the French mal au cul (literally, ‘pain in the arse’). This was allegedly inspired by the presence of cannibals, volcanic activity and other unpleasant features of the island at the time of its discovery. Captain Cook, however, recorded that the inhabitants called the island Mallicollo and the ‘pain in the arse’ etymology is presumably a sailors derivation from the original name.

And so, I arrived.

Morning brought a very long walk. I walked for about 4 hours. The sun started to poke through the cloudy skies (finally) and for the first time in Vanuatu I felt the tropical sun on my shoulders. Dirt kicks up in my face whenever a truck flies past me. Thankfully it’s not too often. When I get back to my bungalow I crash until the truck comes to take me to the Small Namba tribe. “Namba” refers to the size of the penis covering. They use leaves and fibers to cover their parts. 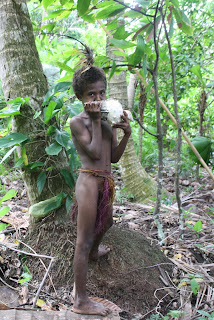 The village is down some rough roads made rougher by the incessant recent rains. My guide is called Veronique and she speaks 5 languages fluently. She’s kinda da bomb. This village is made just for tourists but there are plenty of areas where people still dress and live in thier ancient “custom” ways. But those are insanely hard to get to and require days of hiking and plenty of guides. And really, I’m not one to taint another persons culture by infecting them with my own. 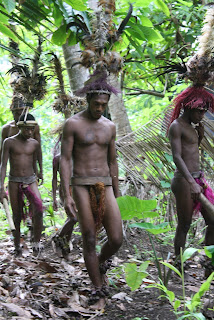 When I see my first namba I think, “looks like a good sized namba to me!” The men are all super fit and thier legs are strong. There is a coconut fiber and leaf wrap just around their willy and several strings of fuschia raffia dangling over thier butt crack. All of the is held in place by a kind of leaf belt. As the dances start the men don high feather headdresses that are structured with bamboo. It’s a bit Vegas showgirl and I’m super keen on them! The women wear a woven mat skirt and shell necklaces with fluffy feathers stuck into thier hair. It’s all very stunning and I may have to rock that shit back in LA. 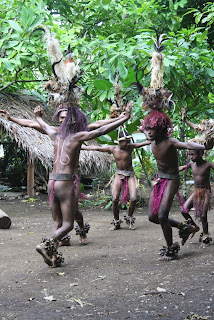 The dancers wear ankle rattles but don’t do much singing. But it’s all gorgeous and I’m so fortunate I get to experience this whole demonstration. There is a headress change and another dance then I’m taken over to where the women are chilling out. They show me how to make a fire then cook me grated yam in a bamboo over the fire. Then fresh coconut milk is poured over it. It’s so bloody delicious I’d ask for seconds if there was any more. Then the women show me mat weaving and all the toys they make with palm leaves. Meanwhile the kids are near to naked and are playing hopscotch in the center of the area. Kids are kids wherever you go. Some things just never change. 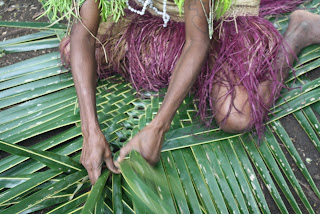 It was sad to have to leave the Small Nambas and the whole thing just wanted to make me cry. People made me feel so welcome all over Vanuatu and thus tribe was no different. I don’t know how an entire country can be so accommodating, kind and generous to absolute strangers. Vanuatu has shown me what it’s like to never have to look over your shoulder, or fear a dark street. I love this place!