A tad off-piste for most visitors to Himachal Pradesh, Narayan Devta Temple -– ancient shrine in honour of the local deity – is located in the Nawar Valley of Rohru district.  I had made the acquaintance of this little-known nugget through a photograph and was raring for a closer encounter.  The opportunity presented itself soon enough during my stay at a farm near Kotkhai.

For those well in the know of Himalayan hinterlands, the partly tarred and partly non-existent country road from Rukhla (40kms), where I was most comfortably ensconced, will come as no surprise.  The consequent bone rattling and teeth clattering two-hour ride was rendered less excruciating thanks to expert 4WD steering and the nostalgic chit-chat of long-standing friends. A picturesque picnic stop at Shararru, highest point on our excursion, provided a welcome break to take in the splendid panorama I was loathe tearing away from.

Perched high on the edge of a deodar-engulfed precipitous promontory, the temple’s stunning carved wood and stone structure crowned with slated gambrel roofs comes visible from a considerable distance. A makeover that has lasted many years has accorded the temple a spanking new incarnation even as restoration continues. Given the propensity of those in charge to slather surfaces with ceramic tiles under the guise of shoddy beautification, it was heartwarming to see this one had thoughtfully retained its traditional temple grandeur. The priest in residence showed us around with justifiable pride, yet no amount of cajoling moved him to allow us a glimpse of the deity–generally a beaten metal mask in these parts, unlike idols elsewhere. “Come back for the mela in April”, he invited instead, unhurriedly escorting us off the extensive premises. As is custom, the devta (deity) will be carried aloft a chariot of sorts sported by brawny men, and accompanied by horn-blowers and drummers to announce his arrival at the fair. In this instance, at Tikkar, one of a smattering of close-by hamlets which believe in and benefit from his benevolence. 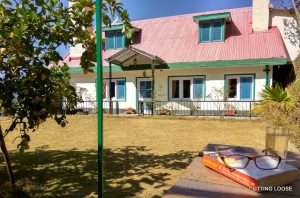 On the other hand, is one I have taken countless times since the first trip, thirty years ago.  Then, Smitra Orchards, home to a college friend who generously invited me back for summer vacation every year. Now, Himalayan Orchard, still home to a college friend who never rescinded that invite.  Following a longish English-teaching spell in Japan, she and her husband returned earlier this year to throw open home and hearth to the discerning holiday maker. That they acquiesced to every one of my demands, including which room to sleep in, what to eat, attractions to visit, does not cloud the least my recommendation to must-go.

Other visitors are unlikely to be treated any different. Except perhaps they may draw the line at emptying out the master bedroom each time! What remains endemic though is waking up to the soft strains of instrumental music, Devanshe pottering around the kitchen, Mike alternating between greenhouse construction, damaging drill bits, and endless refrains of ‘cuppa tea?’. Followed by an eagerly awaited ‘the usual?’ at sundown; sometimes a little before. The cocks will crow at wrong times of day, cows moo as loudly, goats bleat as throatily, while Jack the handsome guard dog will sleep through it all; Rosy’s envy-laden feline hissing included.

On my part, I simply vegetated through my stay. A typical day went something like this: Retiring from hearty breakfast to sun-drenched garden nook, book in tow; breaking for delicious delicacies at lunch (the sidkoos here are to die for, and if you’re not easy on the ghee, of); avoiding afternoon draughts in the sunroom, thoughts in tow. The billiards table and dartboard in the adjoining games room, heated floor and all, tempted only momentarily. It was the well-stocked library that held my attention most. Truth be had, the tranquillity was so complete; it mandated a re-read of The Argumentative Indian to prepare me for reality.

Evenings drew us all to the inglenook in the drawing room, cozier and rosier by the minute not least as a result of generous libations. Some credit though must be ascribed to the wood-burning stove. And to a display of mock-angst during several rounds of parlour games; Dudo, a Latin American version of Liar’s Dice, causing the most furore. Broken usually by dinner-announcing wafts from the kitchen; some days Devanshe’s European indulgences, some, her mother’s magical manna. Nightcaps, before calling it a day, were accompanied by guitar-strumming or re-running Monty Python sketches on the overhead projector. Pleasures all born from shunning the idiot box. 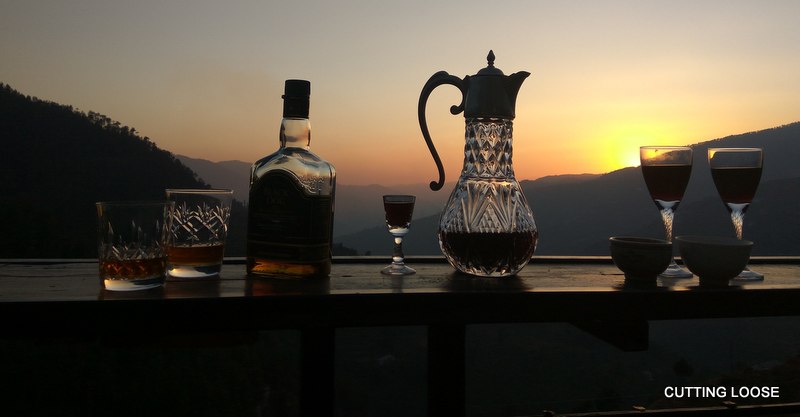 When she is not travelling, she is writing about it. Over the past decade or so, she has created an impressive writing repertoire for herself: as a columnist with Hindustan Times, as a book reviewer for The Tribune and as a contributor to travel magazines in India and overseas. Her work-in-progress, the documenting of colonial heritage along the Old Hindustan-Tibet Road, is an outcome of her long-standing romance with the Himalayas.
Read More Share
Wisdom 2.0, Where Consciousness & Wisdom Meets the Digital Age
What You Should Know About Ethiopia’s Addis Ababa!