Well, the games have been going on all week for those who attend the Interactive, Film and Music portions of SXSW. I arrived only for Music on the Local Music Vibe/Chuck Prophet van express, so my experience of the annual festival is waking up with coffee and The Punch Brothers at KUT Live at the Four Seasons. This was a kind of no-fail choice: I knew how great The Punch Brothers were having had my mind blown by their musical alacrity a couple of years ago at The Living Room in New York.
Five very accomplished guys on bass, mandolin, fiddle, guitar and banjo who draw heavily on their bluegrass roots but owe as much to jazz. They’re playing all over Austin in the next couple days so catch them if you can.
Fortified, we wandered down 6th Street to meet up with some friends, acclimate to the rapidly filling streets and high level of beer consumption and see what we’d happen upon…which included a Canadian Guitar Showdown with a spot by Telecaster titan Bill Kirchen, a tired Trampled by Turtles contemplating their next show by sitting on their gear outside the Tap Room, and Band of Skulls at Cedar St. We took refuge from the throngs among friends at LoungeFly SF’s Showcase before heading to South Congress. 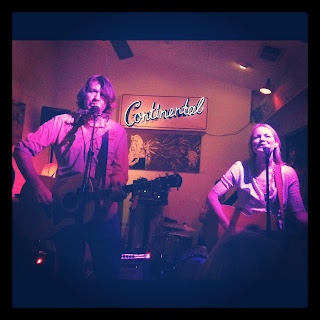 Home to Jo’s Coffee, The Continental Club, Guerra’s Tacos, Hotel San Jose and Yard Dog Art Gallery, the South Congress District  is my favorite place in the city. And they host their own unofficial SX San Jose event with live bands, drinks and general bonhomie.  We enjoyed the scene there before lining up for the Kelly Wilson and Bruce Robison show at the Continental Club‘s Gallery Annex. A little listening room upstairs from the main club, the Gallery small, cozy, and filled with keen listeners and avid fans of the married pair of songwriters.

I’ve long heard of how great Willis is and just recently caught the fact that she was collaborating with her equally accomplished partner. Rootsy, warm and excellent at their craft— she’s got one of those great sweet country voices— the duo and their band presented a spirited set of originals about love and heartbreak that made me believe in the power of playing music all over again.

Deborah's many performance credits include an appearance at the 2006 Millennium Music Conference, the RockerGirl Magazine Music Convention, IndieGrrl, at several of the Annual Invasion of the GoGirls at SXSW in Austin, TX, the Harmony Festival and 2009's California Music Fest, MacWorld 2010, Far West Fest and many other venues and events. She toured the Northwest as part "Indie Abundance Music, Money & Mindfulness" (2009) with two other Bay Area artists, and followed up with "The Great Idea Tour of the Southwest in March 2010 with Jean Mazzei.
Read More Share
The Creator’s Project Holds Monster Arts & Tech Festival Now In San Fran After Asia & Europe
Passing Through Tucson Arizona: Road Scenes