An international team of heavy hitting women in Street Art are the centerpiece of the Wynwood District this weekend as Jeffrey Deitch returns to Miami to co-curate Women on the Walls. Reprising a more central role for Wynwood Walls that he played when Tony Goldman first established this outdoor mural playground, Deitch says he is reserving center stage exclusively for the women this year as a way of highlighting their history and growing importance in the graffiti/street art scenes around the world.

“It’s to correct the historical imbalance,” says Deitch as he talks about the new wall murals painted this week and the accompanying gallery exhibition showcase that celebrates the contributions of outstanding women artists in a scene that, with a few notable exceptions, has been primarily run by the guys. 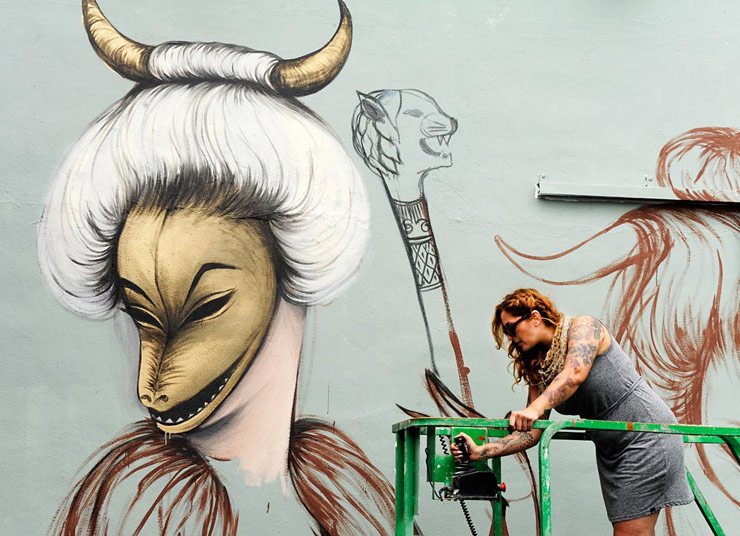 Miss Van at work on her wall. (photo © Martha Cooper for Wynwood Walls)

“After this historical imbalance there was something that needed to be addressed about the misperception that graffiti is just a boys club,” says the enthusiastic bespectacled curator who shares the role for this show with the team of Janet Goldman, Jessica Goldman Srebnick, Meghan Coleman, and Ethel Seno.

As with the Living Walls Atlanta festival on the streets in 2012, this show gives full voice to women in a holistic and powerful way that rather redefines the context of a graffiti/street art/tattoo/skater scene which sometimes veers too close to being overtly sexist, if not outright misogynist in it’s depiction of women and their roles. 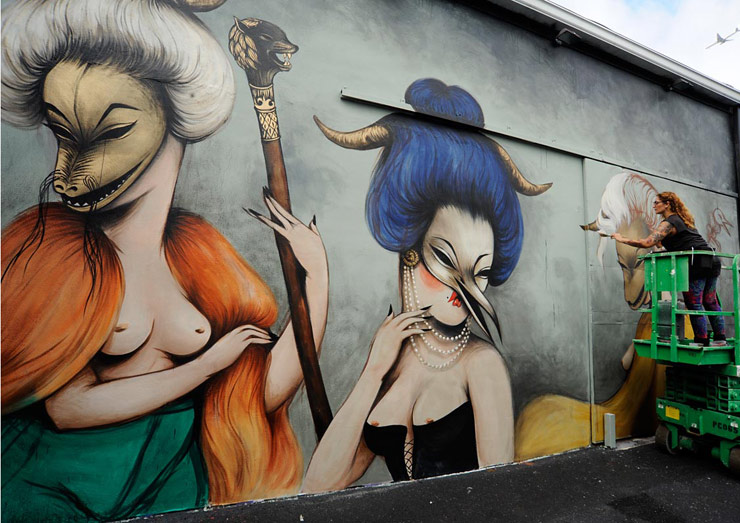 Miss Van at work on her wall. (photo © Martha Cooper for Wynwood Walls)

Maybe it’s the scene itself – much of the graff / Street Art scene has always had partially skewed perceptions about the gals because they were traditionally populated almost exclusively by males.  Since work on the streets is a mirror that reflects society back to itself, it makes sense that we’re looking at a funhouse on the walls sometimes. But you don’t have to accept the narrative entirely and shows like this argue for greater authorship of the visual dialogue. Right now in civic life you’ll see strong positive images as more women are assuming more history-making leadership roles than ever, but there are also a lot messages in media and pop culture that portray women as little more than one dimensional giggly jiggly sex toys.

For Parisian artist Fafi, a show with this theme could not be more timely.

“The atmosphere about women these days is really fucked up, especially towards younger ones,” says the street artist as she relates the sentiment of conversations at a late dinner she recently had with co-participants Miss Van and Maya Hayuk.

“It seems like in 2013 it is almost a passé sort of gesture that a bunch of women would have to get together to make a statement when we’ve all been doing this for so long,” says Maya Hayuk, whose bright geometric patterns were on the forefront of a current Street Art fascination with the abstract. “Hopefully in the future we don’t have to do ‘all women’ or ‘all men’ or ‘all anything’ shows,” she says sort of wistfully, “We can do shows on ‘all awesome’.” 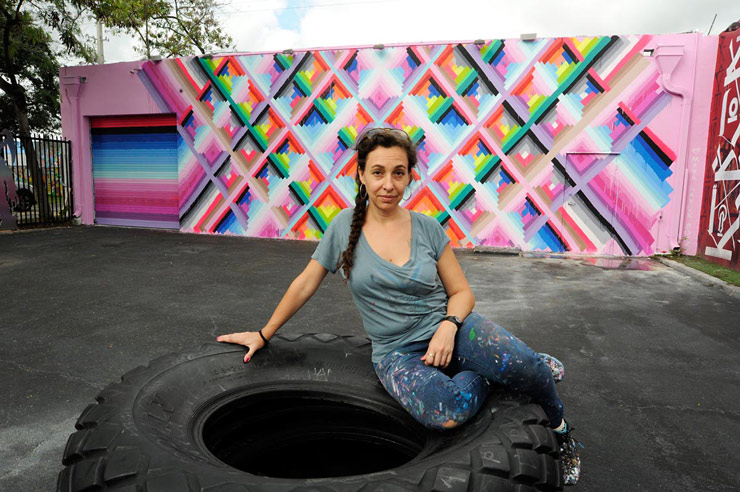 So perhaps Deitch and Co. are rebalancing much more than they realize by creating this environment that values the contributions of artists who also happen to be women.  Whether it was their original intention or not, the experience this week for many participants has been about empowerment – and networking. The complexity of the list itself speaks to the varied and unique stylistic influences that are now brought to the street by women and a certain validation of these voices is reflected in the fact that many here have had commercial success on their own terms.

“I think it’s a great privilege to be here with these women artists, to be in a show with them, and to create this work in a public space,” says the Polish born Brooklynite Olek, who has made a singular name for herself on the street in the last handful of years by covering bicycles, shopping carts, public sculptures, even people with her hand-crocheted pink and purple camouflage.  We have called her the Christo/Jeanne Claude of the streets, which gives an apt sense of the skin-like quality of her wrapping as well as the interventionist instinct she follows, but it doesn’t quite tap the personal level of involvement Olek has with her pieces. 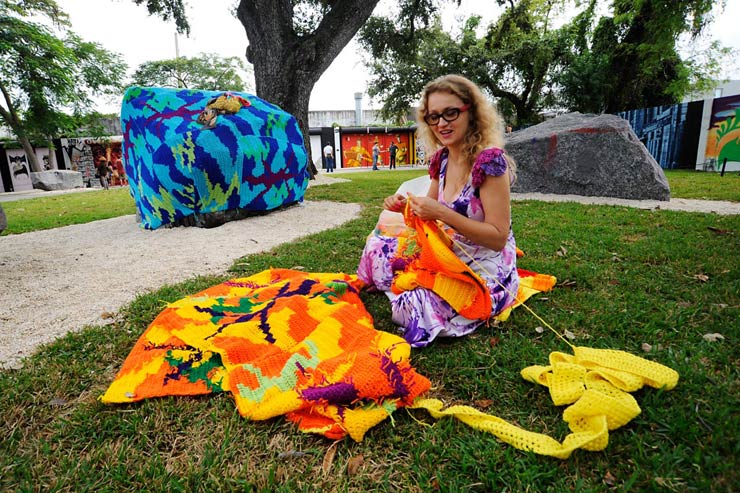 Olek at work on her installation. (photo © Martha Cooper for Wynwood Walls)

For Wynwood she has been hand-crocheting covers for the large heavy boulders that dot the inner grounds of the complex in a blunt and rugged manner. “Of course I love these rocks because I like to highlight things in the existing environment and to give them a new life, a new beginning,” she says while sitting on the grass joining the pieces of her new coverings by hand. 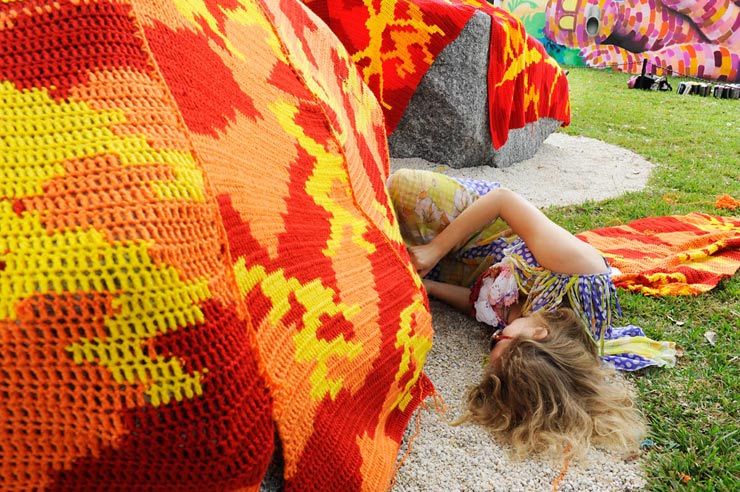 Olek at work on her installation. (photo © Martha Cooper for Wynwood Walls)

Does she think the energy and atmosphere here is positive? “All the girls are really wonderful and I love working with them – we are all just working here, eating, talking, and I think we have made some friendships that will last a very long time.”

For more photos of women artists and their work, see the full article and extensive write-up including photos over at Brooklyn Street Art.