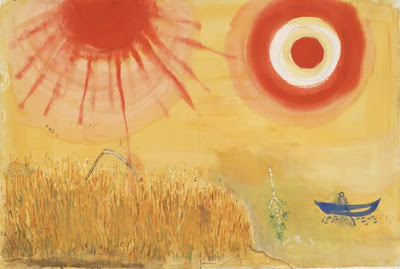 On what I’m told was one of the hottest days on record in Philadelphia, I ventured to the Philadelphia Art Museum. Back home, Berkeley visual artist and one-time Philly resident Gail Gove had tipped me off on the Philly museum’s ‘great collection,’ and my visit coincided with “Late Renoir” a special exhibit which had rounded up 80* or so lovely Impressionist pieces from Renoir’s later decades. Along with some pieces by Matisse, Picasso and other contemporaries, admirers and collaborators of Renoir thrown in for good measure, it was a pretty full-meal day of art viewing. So with images of languid days in the French Countryside and musicals salons in my head, I walked downstairs only to be floored and delighted at the site of “A Wheat field on a Summer’s Afternoon,” a 30 feet x 50 feet tempura on fabric piece by Marc Chagall. Completed in Mexico on commission for what is now the American Ballet Theatre in 1942 it was stunning. Granted Chagall is, well Chagall, I was totally surprised by its exceptionally high *Truth! Beauty!* quotient.
The entry guard on duty had to my mind what was the best seat in the house. The view of the city from the museum entry was none too shabby either. Inspiration, yeah, I’ll take it anytime.

* I was happy to see this very late Renoir self-portrait in reality. My late great Aunt Charlotte, a visual artist, and one of my great inspirations had a copy hanging in her home for much of her latter life.

Deborah's many performance credits include an appearance at the 2006 Millennium Music Conference, the RockerGirl Magazine Music Convention, IndieGrrl, at several of the Annual Invasion of the GoGirls at SXSW in Austin, TX, the Harmony Festival and 2009's California Music Fest, MacWorld 2010, Far West Fest and many other venues and events. She toured the Northwest as part "Indie Abundance Music, Money & Mindfulness" (2009) with two other Bay Area artists, and followed up with "The Great Idea Tour of the Southwest in March 2010 with Jean Mazzei.
Read More Share
First Round Capital Draws the Best Again and Again
Chicago’s Top-Notch Beefburgers