As timing would have it, we had a gig in wine country on the Sunday of the August Sonoma County Earthquake in California. It was in Sonoma County rather than Napa, but like most people living in the Bay Area, we’d felt the earthquake in the wee hours of the morning. 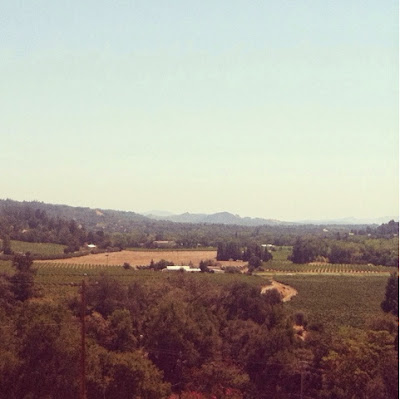 Like most California natives, the feel of an earthquake is familiar. The first hints of movement, the approaching tremors and then the peak of the shake. Kind of like thunder in the earth. This one felt long and steady (I think I woke up after the sharpest of the jolts), not enough to get out of bed but enough for us to know it wasn’t an inconsequential tremor.

It felt to me that we were at or very near the center of something moderate…or somewhere not too far away, some peoples lives were changing considerably…which they were. My best wishes are going out to those in  Napa who are reeling from the 6.1 quake’s aftermath, and whose nerves are likely rattling from the 80+ aftershocks.

While I don’t think of moving from California when an earthquake reminds me how fragile things really are, something primal in the survival department does get rattled. The earth moving is an awesome event, period. And I have instant recall of the two other largish and large earthquakes I’ve been in (5.9 in 1979 and 7.1 in 1989, both while I was living in Santa Cruz), down to what I did (ducking and covering under a dining room table and doorway respectively), and who I was with, and also that knowing that ‘this one’ is a ‘big one.’
I had the brief  thought on Sunday that maybe we shouldn’t go the gig in Geyserville because of the quake. There were bridges to cross, after all, and we’d be heading closer to the epicenter than we were here in Alameda. Then I realized how silly that was—that while we could control how close we were to a fault line, there are infinite risks inherent to living anywhere, but it’s the living, as risky a proposition as that can be, that’s the point. And so we made the drive, and enjoyed playing atop a beautiful hill with a bucolic view of Dry Creek Valley.

Deborah's many performance credits include an appearance at the 2006 Millennium Music Conference, the RockerGirl Magazine Music Convention, IndieGrrl, at several of the Annual Invasion of the GoGirls at SXSW in Austin, TX, the Harmony Festival and 2009's California Music Fest, MacWorld 2010, Far West Fest and many other venues and events. She toured the Northwest as part "Indie Abundance Music, Money & Mindfulness" (2009) with two other Bay Area artists, and followed up with "The Great Idea Tour of the Southwest in March 2010 with Jean Mazzei.
Read More Share
Get out of Bangkok to Experience an Off-the-Beaten Path Thailand
San Francisco's Friday Night Market On Mid-Market Street