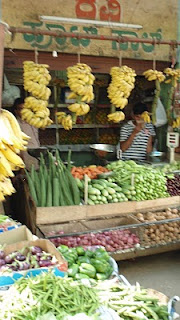 “The diet is the final frontier for a Yogi. It’s a lot easier for people to acclimate to waking up and going to bed earlier, or being more physically tired throughout the day, but eating a proper diet is really challenging.” — David Garrigues, Certified Ashtanga Teacher, in Prescribing Yoga

If students in Mysore aren’t thinking about how their yoga practice is developing, they’re likely thinking about food. Early morning practice times, eating to truly support your practice, finding clean food to eat, satisfying a hearty appetite born of all that practice and figuring out to accommodate special diets in a foreign land are perennial topics. A penchant for celebratory events involving food and the yum factor of Southern Indian cuisine, makes eating in general quite easy. Eating right for your particular goals and constitution quite another.
Having a lifetime of food/digestion challenges, I’m still figuring out where I’m at amid Garrigues’ ‘final frontier.’ That said, after three trips to Mysore, I’ve found eating clean and healthy in India fairly easy.

There are several cafes that cater to Western palates and cleanliness; filtered water is habitual (as is hand sanitizer) and there are likewise several grocery stores and at least one green market at which to shop if you have a kitchen.
This trip, I’ve enjoyed eating home-cooked meals most of the time, augmented by the periodic search for the perfect dosa. (South India’s signature crepe-like dish made from rice and white daal). Otherwise, it’s become habit to pick up fresh papaya, pineapple and bananas at the fruit stand on the corner as I need it. A vendor who bakes fresh ‘ragi’ (wheat) and millet bread is often selling his baked goods, as well as raw local honey (which I highly recommend), home-made tofu and soy milk (if you like soy, I don’t) and tahini outside the studio after class. I’ve also had the good fortune to be sharing a flat for the first portion of my trip with a great cook from Spain, Manuel. He’s started hosting a couple ‘sattvic lunches’ at the house before he goes home, and I’ve been taking some notes on his way with daal, pasta and rice dishes with fresh and health sauces as well as making clean and healthy salads from the available produce. It’s easy to find tomato, green beans, beets, onions, tomatoes & cauliflower, although I’ve found broccoli and avocados to be hard to find. The weekly green market turns into somewhat of a competitive run for one vendors fresh lettuce and basil but it’s worth a go if you’re free on Sunday mornings.
After that it’s really just about managing portion size and whether you can handle spicy food. My first week here I was at several parties and a resort that kept sending extra dishes to our table that it seemed rude to refuse. Likewise, I’ve found that if I’m a guest at an Indian home, it’s wise to come with a really big appetite as you really can’t say no most of the time. But more typically, and best for feeling light in practice and healthy in body, I’ve found it works as have many students I know, to eat only two meals per day (breakfast & lunch) and a light snack, if anything, at night.

Deborah's many performance credits include an appearance at the 2006 Millennium Music Conference, the RockerGirl Magazine Music Convention, IndieGrrl, at several of the Annual Invasion of the GoGirls at SXSW in Austin, TX, the Harmony Festival and 2009's California Music Fest, MacWorld 2010, Far West Fest and many other venues and events. She toured the Northwest as part "Indie Abundance Music, Money & Mindfulness" (2009) with two other Bay Area artists, and followed up with "The Great Idea Tour of the Southwest in March 2010 with Jean Mazzei.
Read More Share
The Food of the Czech Republic
Christmas Pudding – Why is it called “Pudding”?