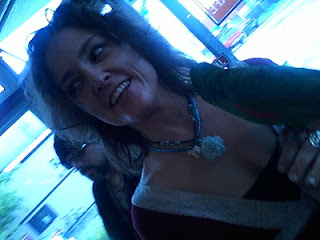 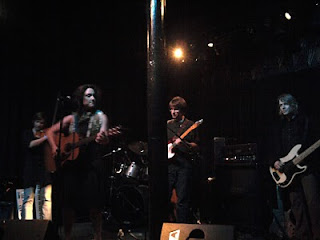 I was really happy with the show(s)* on Sunday. The gas pedal has been kind of stuck on so pauses have been few BUT, I’d be remiss in not reiterating how much I enjoyed sharing a gig with Grace Woods and Festizio, who were joys to work with (as well as pros and wonderful artists), see friends familiar and dear and play songs new and old with my band. I love the folks I’ve been playing with this year and how they’ve helped me develop my tunes. I’m a walking Cafe Gratitude board game about it. If you weren’t there, you can hear, and procure, the results of our labor “It’s All Up To You” at iTunes or Cdbaby.

*Grace and I (backed by Kwame and Tatiana) did a warm up set at Nomad Cafe earlier in the day on Sunday before heading to SF. A bird showed up amid our brunch time set. There was also deluge right in the middle of “Adding Water to the Ashes” which seemed kind of prophetic. (Later, at Red Devil, it rained so hard the green room flooded.)

Deborah's many performance credits include an appearance at the 2006 Millennium Music Conference, the RockerGirl Magazine Music Convention, IndieGrrl, at several of the Annual Invasion of the GoGirls at SXSW in Austin, TX, the Harmony Festival and 2009's California Music Fest, MacWorld 2010, Far West Fest and many other venues and events. She toured the Northwest as part "Indie Abundance Music, Money & Mindfulness" (2009) with two other Bay Area artists, and followed up with "The Great Idea Tour of the Southwest in March 2010 with Jean Mazzei.
Read More Share
Homebody: Earth Day/Earth Expo
2012: Time for Change – Psyche & Spirit the New Cutting Edge?