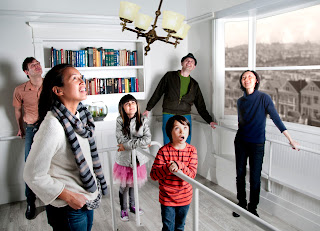 If you duck under a table or desk when a big truck rumbles by your front door you may not want to know any more about the potential for strong, destructive earthquakes in the Bay Area. But if you’d like to learn about why our little piece of the earth’s crust moves the way it does head over the California Academy of Sciences in Golden Gate Park where, for the next year, an exhibit entitled simply “Earthquake” covers the west exhibit area and planetarium.

The 18-minute planetarium show is particularly awe-inspiring, a journey high above and into the earth, zeroing in on California’s San Andreas Fault and San Francisco with footage of the 1906 quake and ensuing fire that destroyed much of the city.

In the west hall of the Academy a large exhibit area is dedicated to teaching children and adults about earthquakes with interactive lessons in local geology.
No doubt the biggest crowds will be for the “Shake House,” a recreation of an old Victorian residence. Once inside the “house,” you hold onto railings as Academy technicians flip a switch to set the place rocking and rolling, one time for a re-creation of the 1989 Loma Prieta earthquake (6.9 magnitude) which occurred as the World Series game between the San Francisco Giants and the Oakland A’s was about to start.

The second is the 1906 shaker, which, at 7.2 magnitude, was 32 times stronger than the 1989 earthquake. Both jolts leave powerful impressions. 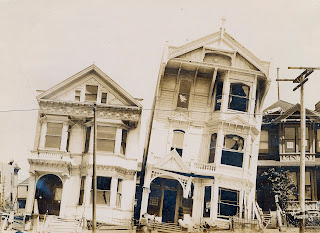 Outside, there’s plenty of information about what you can do to prepare yourselves, your families and your house for the next Big One.
One of the exhibit sponsors, Safeway, offers food products (canned foods, granola bars, etc.) and bottled water that can be ordered as a package and kept in the event of disaster.

Live ostriches are part of the exhibit, too. You can discover for yourself the correlation between these cute little furry animals and the shaking that sometimes goes on in these parts. The exhibit runs for the next year at the Academy. The planetarium show often sells out so plan to arrive early (especially during summer peak season when the kids are out of school) and get your tickets for screenings later during your visit.