I spent most of the summer at Sonoma County’s Russian River, which seems to undergo transformations every few years (the latest is an influx of San Francisco-style hipsters, including some fine chefs). But some things never change. 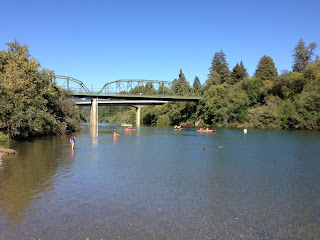 Take Johnson’s Beach, where the annual Jazz and Blues festival is happening this weekend. You can still drive down to Johnson’s and park for free.You can spend a lazy day on the river’s rocky shore. Bring a picnic and nibble all day. Wander over to the snack bar for a beer and a burger, splash in the water and, when the sun gets too hot, get a beach boy to bring over a mallet and hammer in the post for a bright umbrella. 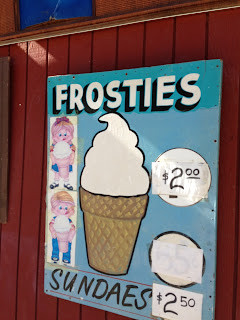 You can rent inner tubes, paddle boats, canoes or kayaks and paddle under Guerneville’s two bridges (the old one today is pedestrian-only).
Inner tubes are big here and maybe the most fun. Kids get a bunch of them, stack them up and plop around for hours. 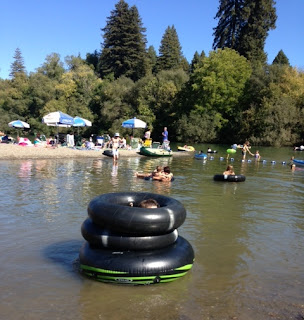 Hamburgers and hot dogs are only $3 and a big vanilla Frostie soft ice cream cone is $2.

It’s still a family-run operation as it has been since 1918. At the snack bar is 92-year old Claire Harris,who cheerily serves up beer and rents the canoes and kayaks. Just like when I was a kid, a while ago.

And, from chatting with others, it’s a generational thing: people came here as kids and bring their kids and grandkids to Johnson’s today. Maybe it’s the old-time atmosphere but even teenagers seem to pick up the vibe: you don’t see them on smartphones and electronic gadgets. 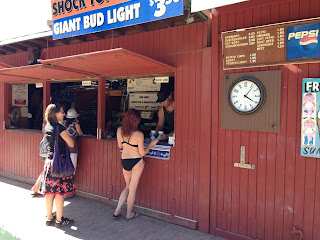 A day at Johnson’s passes quickly. Before you know it, it’s time to leave the canoes, kayaks and inner tubes. Fold up the umbrellas. Pack up the beach towels, chairs and coolers.

Around 6 p.m. Claire announces that it’s quitting time over the loudspeaker.
Then he plays “It’s Only a Paper Moon” and the beach folks, including tired, sunburned kids and slow-moving adults who reluctantly rise from chairs and sleepily from their towels, make their way up the dusty hill to head back to their cars and to home. 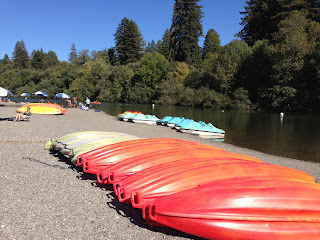