I’ve met and re-met San Francisco songwriter Billy Schafer through various songwriting communities over the years. And every time I circle back on his latest work, I admire anew his ability to imbue a song with equal parts hope, lyricism and a hook I end up humming for hours afterward. Likewise, he can really sing. An all around bright light in an often murky field, Billy talked about his approach to the troubadour tradition as he prepared to take off on his “War on Gravity” tour.

Q: When did you first start writing songs? Can you see a thread between that first tune written and where you are now?

BS: I wrote my first song around the time I was 7. I was fascinated by beat-box style rap (my first album was DJ Jazzy Jeff’s “He’s the DJ, I’m the Rapper.”). I liked the linguistic gymnastics—the word play and phrasing. It made me want to make up my own songs. One day it occurred to me to record a beat-box onto a tape recorder, then play it back and rap to it while a second recorder captured both “tracks”. It was crude multi-track recording well before I knew it existed or I knew how to play any instruments. These early beat-box/rap “songs” were terrible I’m sure, but I thought the process was a blast. Although it’s a powerful rush to be on stage and perform the songs for fans, my favorite part of it all is still writing and recording new music.

Yes, I see a couple threads between my first song and where I am now. My early interest in wordplay and “groove” definitely comes out, even though my songwriting style evolved toward guitar-driven alt-pop. For instance, there’s the Portuguese rap-speak on Valeska (track 5 off my album “First to Believe”). I’m also writing some songs recently from beats vs. guitar/chords. I’ll go to my rehearsal space and record a drum part I have in my head and then write a song around it. It’s a more visceral and sometimes “vibey” way to write a song. In some ways, it reminds me of those early days beat-boxing into tape recorders and building songs up from there.

Q: Can you talk about your early musical influences and what or who inspires you now? Listening to anything now non-stop?

BS: Alongside my boyhood fascination with beat-box rap, I was into pop-rock and pop-folk. Stuff my mom would play like Simon & Garfunkle, Buddy Holly, Dion & The Belmonts, The Beach Boys, Cat Stevens, Van Morrison, the Beatles, etc. I think I connected to and internalized these influences largely because I have a huge sweet tooth for melody. If a song doesn’t have a captivating melody or hooks, my somewhat ADD brain has a hard time staying with it. My dad, a trumpet player, tried to instill in me an appreciation for classical music. He’d drop the needle on a record, and if I could name the piece and composer I’d get a dime. I never earned enough to even buy a pack of gum from that game. Sorry, Dad. But maybe all that Saturday-morning classical seeped in as an unconscious influence and explains why I’m so drawn to strings. I included 3-part string arrangements on a couple songs on “First to Believe,” and I often perform live with viola or violin. I think by virtue of growing up in Texas and then having spent a couple years of my life living and traveling in Latin America, I’ve also picked up some old-school country/crooner influences from guys like Willie Nelson, Hank Williams, and Roy Orbison as well as some Latin/World leanings from artists like Manu Chao, Joao Gilberto, and Jorge Bem. Much of what I’m listening to lately is Alt-Pop Singer-Songwriters (like Brett Dennen, Beirut, Jason Mraz, Bright Eyes, Elliott Smith, Joshua Radin, David Gray) and eclectic alt-pop bands like Vampire Weekend, The Dodos, Grizzly Bear, The Morning Benders, Beach House, and Phoenix (I’ve had their last record on heavy rotation—it’s fantastically produced).

Q: You spent time in South America: What led you to Brazil? Will you return?

BS: What led me to Brazil was a girl, a desire to learn Portuguese, and being broke and tired of living out of a back-pack. After college, I saved up some money and bought a one-way ticket to Mexico. I told my folks I was off to see the world and would be back in a few years. I had a genuine case of wanderlust, and so I wandered around Mexico, Central, and South America for about 10 months, occasionally busking, playing music for meals, and just living the dream….meeting people and experiencing new things. But money and being a rolling stone wore thin. I wanted to plant myself somewhere for a while, so I went to see about a Brazilian girl I’d met who said she could help me get a job teaching English. So I took the three-day “Tren de la Muerte” (literally, Train of Death”) from Bolivia to Campinas, Brazil. Within three days I had a job teaching English and a broken heart (the girl had acquired a serious boyfriend/soon-to-be fiancé). I got busy teaching English, making new friends, learning Portuguese, and taking Bossa Nova guitar lessons.

Will I return? I’m not sure moving back to Brazil is in the cards anytime soon, but I love Latin culture and will definitely continue to go south of the border from time-to-time.

Q: I know you’re active in some educational initiatives-can you talk about your work with youth outside of work/music?

BS: I really enjoy teaching and mentoring, and I’m involved with a few groups. I’ve taught a few semesters of Junior Achievement to grade-schoolers in Oakland (JA’s mission is to educate and inspire kids to value free enterprise).

This past February, I briefly volunteered with a group in Nicaragua called “Rhythm in the Barrios” that provides music education and enrichment for underprivileged kids, using both local music teachers and visiting musicians. I spent a few days teaching the kids “La Bamba” and “Cielito Lindo,” as well as “Hey Jude” and “Rivers of Babylon.” I also talked about songwriting to some of the older kids who were learning guitar. The kids ranged from shy to rowdy, but they seemed to get a kick out of it all. One afternoon after class, as we walked through the countryside to catch a bus back to Granada where I was staying, I heard a number of the kids humming and singing “La Bamba.” That brought a big smile to my face and was a poignant reminder of how wonderful music is. It brings nearly universal pleasure and enrichment and costs so little to share and nurture. I’d like to go back for longer next time and perhaps teach an extended songwriting class. It’s not like I’m some expert, but perhaps I have a few useful ideas I could pass along to someone just starting out.

I’m just getting to know a Bay Area group called MUST (Music in Schools Today) that provides a series of music programs to under-served school districts. I’ll be a volunteer “celebrity server” at one of their upcoming fundraisers, and I’m looking forward to seeing how I might be able to help out in other ways.

Q: Your new material deals with some thornier issues—what can your fans and audiences look forward to?

BS: I suspect my next album (aiming for Spring 2011 release) will have a greater breadth of moods as well as production that takes more chances. I’m proud of the songs and sound of my first album, but, looking back, it feels safe. As a writer, I’ve been experimenting and stretching myself. Not just for the sake of it, but because various news ideas, approaches, and sonic directions have piqued my interest.
Thematically, I’d like to have more variety too. Most of the music off my first album could be classified as hopeful love songs. I write a decent amount of that kind of material, simply because it’s just part of who I am. But I’ve also been writing songs that address messier and moodier moments of my life from the last two years…dealing with a major break-up, confronting my and others’ fears, vulnerability, and even mortality. There are also a couple songs in development that reflect on “current affairs” in society. [I’m not sure] what will make it on the album. These things can take on a life of their own during pre-production (which is where I am now 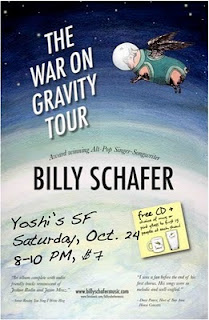 ) and even when you’re recording in the studio.

BS: The flying pig represents a deliberately whimsical take on the impossible. Forging a career as an indie-artist is tough—it seems nearly impossible at times to get things off the ground. Part of what keeps me going, though, is a blind-eye, tenacious sense of play…still feeling like the wide-eyed kid in his room, lost in the rapture of making up beat-box rap songs using tape recorders. I wanted an image that put these two elements together—the heavy and almost ridiculous-to-hope undertaking with the underlying sense of wonder, play, and blind faith that fuel it. Hence, the flying pig.


BILLY SCHAFER launched THE WAR ON GRAVITY TOUR on October 15 and wraps up in San Francisco at Yoshi’s Lounge San Francisco on October 24 at 8pm. For more information and a tour itinerary, visit http://billyschafermusic.com/

Deborah's many performance credits include an appearance at the 2006 Millennium Music Conference, the RockerGirl Magazine Music Convention, IndieGrrl, at several of the Annual Invasion of the GoGirls at SXSW in Austin, TX, the Harmony Festival and 2009's California Music Fest, MacWorld 2010, Far West Fest and many other venues and events. She toured the Northwest as part "Indie Abundance Music, Money & Mindfulness" (2009) with two other Bay Area artists, and followed up with "The Great Idea Tour of the Southwest in March 2010 with Jean Mazzei.
Read More Share
Burning at Burning Man: Decompression 2010
Bellagio’s Yellowtail: You Had Me At The Walu & Duck Prosciutto