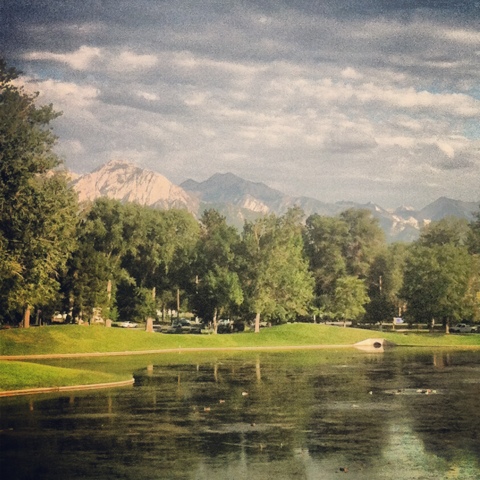 Gary Snyder has a book/epic poem “Mountains and Rivers Without End,” an opus that draws on all his Beat Poet/Zen/Nature crazy wisdom. I thought of that title today, rolling across Utah and Nevada with their respective mountains and deserts and highways (rivers not always evident), without end.
Many of the parts of Nevada and Utah that the 80 traverses are the hardest bitten ones: great swatches of possibly inhabitable land. Colorless, hot and dry, they’ve the look of being filled with snakes, barbed wire, abandoned buildings or …explosive devises (we read such a warning in the Mojave last week). We crested a hill and saw two white military dirigibles hovering over some treeless ridges. Again: WTF?
Thank the advent of Smartphones that you can Google “military blimp” in the middle of seemingly nowhere and find out that these floating behemoths are used to mount radar and are being tested in Utah. Hmmm… All that highway calls for much reading, aloud as to entertain the driver, including facts about the towns we’re cruising through. Who knew Rock Springs had such an oppressive and violent past?
Likewise a recent New Yorker provided additional information for review of such humans-behaving-badly matters. If you want to get more up to speed on the implications of the recent Supreme Court ruling Shelby v. Holder do read A Critic at Large: The Color of Law, by Louis Menand. Voting rights and the Southern way of life. http://nyr.kr/14AVbO8     NOW.
It is a chilling review of the horrific obstacles the civil-rights workers endured en route to securing voting rights for African Americans in the 1960s and the very real and troubling politics that are in play today.
On a more positive note, we pit-stopped in Salt Lake City and enjoyed an evening stroll through the 80-acre Liberty Park, so named as its fountains, lake, picnic areas, aviary, tennis courts, trees and lawns were intended for all to enjoy, and indeed a large cross section of the city was happily doing just that on a warm summer evening.
Deborah Crooks

Deborah's many performance credits include an appearance at the 2006 Millennium Music Conference, the RockerGirl Magazine Music Convention, IndieGrrl, at several of the Annual Invasion of the GoGirls at SXSW in Austin, TX, the Harmony Festival and 2009's California Music Fest, MacWorld 2010, Far West Fest and many other venues and events. She toured the Northwest as part "Indie Abundance Music, Money & Mindfulness" (2009) with two other Bay Area artists, and followed up with "The Great Idea Tour of the Southwest in March 2010 with Jean Mazzei.
Read More Share
How Has Travel Made You Become More Green?
The Most Unusual & Wacky Things To Do & See In Taiwan