Beirut: they call this pile the Paris of the Mediterranean but I’ve been to Paris and they must be thinking of a different Paris. It looked great from the air but on the ground you can see they have a management problem. I have some suggestions. Stop letting open sewers run onto the beach where you want folks to swim.

Patch the bullet holes. I know it looks macho but really the war is over and 50 million machine gun holes makes they place look a little unkempt. The whole country is actually on high alert. Many street corners have tanks with real cannons and a guy sitting at the ready. Tens of thousands of soldiers infect the streets, all with machine guns and more sitting at 50 calibers hunkered behind sandbags in blown out buildings. 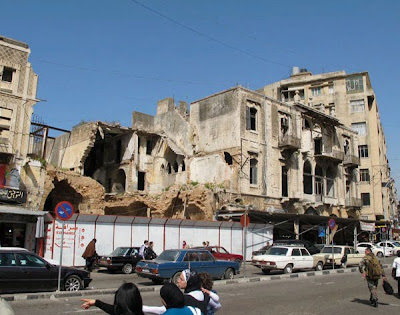 Here’s the amazing thing. They are completely ignored. The place is also clogged with Ferrari dealers, Gucci stores and more Mercedes dealers then anywhere else in the world. I saw as many as two Benz stores in one block and this was out in the country. There are four jobs in Lebanon. Cab driver, soldier, car dealer and plastic surgeon. The place is quite prosperous but it hasn’t translated to elegance. The hills are crammed with a skelter of apartment buildings as high as 12 stories on the tops of the overbuilt hills. The beaches are where the poor folks or even squatters live.

Tyler and I rolled into our beachfront hotel. I asked for a room with a view of the ocean. “No we can’t, high season.” Later we discovered there were about 3 of 100 rooms occupied and we got a view of the construction site. Well, I guess it was high season. We walked all over the city. It is one massive block of concrete. The citizens love to brag about the vibrant nightlife. This means drinking, sex and waving your Rolex in the air. I checked this out with some locals and after feigning insult they agreed. This doesn’t mean that the people are unpleasant. Far from it. The Lebanese are very hospitable (except at our hotel where they told Tyler he couldn’t play the grand piano in the lobby but to their credit they were right. He couldn’t, because it was a fake) The Lebanese will admit that there are a lot of bejeweled posers showing off. But they will insist on putting you up in their home, buying you dinner and probably giving you the Rolex. A generous and warm people while being self absorbed and wildly proud of their concrete playground.

Outside of town we went to Grotte de Jeita. 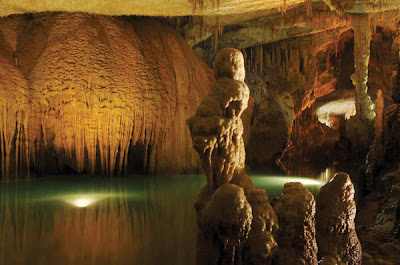 This is a cavern of such heartbreaking beauty that their campaign to have it listed as one of the 7 natural wonders of the world is an effort we will support. Our cab driver, Michael, had suggested we go there and he was so right to tell us. Later we asked him why he was taking us in the wrong direction. In halting English (they speak Arabic and French with a good deal of English) that he said we should come to home and meet his wife over tea. Snap, Michael, another good call and there we were on his veranda looking at pictures of his kids and eating baklava. “Hey Mike, can I have your watch?”

Our preferred mode of travel was the people’s bus. Cheap, and you meet great folks. One ride was with an entire bus of soldiers. All stern faced until Tyler loosed then up with a Beatles song. We drove through Biblos (where the alphabet was invented) to Tripoli. I liked this seaside city. Crazy with bullet holes but no tourists except us and a vibrant market with funny, happy store keepers. From there we took a white knuckler into the mountains to Bcharre. This looks almost like an Italian town with its terraces and olive groves. It’s a ski resort though the snow was nearly gone. This is the birthplace and grave of Kahil Gibran. To some hippies from the 60s this is a big deal. Like Pirsig and Castaneda, Gibran was a minor writer appealing to drug addled hedonists.

In fact many people in the Middle East are hedonists in the best possible sense. A young man in Jordon was lamenting how much he hated his country. He said the people have no ambition, no imagination. “All they want to do is make love to their wives and eat.” Ha! This struck us as highly evolved.

So with a great sushi dinner in Beirut (our last American food for a while) we headed to the old part of the country, the Bekka Valley and the city of Baalbek a Roman stronghold and religious center. 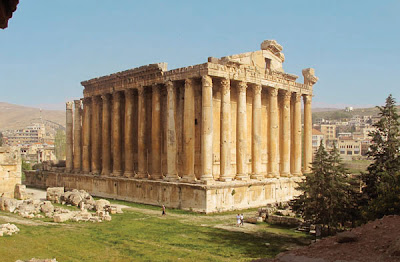 The ruins of the temples are among the finest from ancient Rome. Some of the columns are 60 feet tall and have never fallen. These granite columns came from Egypt across the sea, over the mountains and through the desert and the biggest temple took about 200 years to erect. This take-your-time attitude is still the way they build all over this region. Houses now are of cast concrete and are one to four stories with the rebar projecting from the roof. The upper floors are usually unfinished waiting for the next generation to complete. This gives much of the Middle East a tentative look when it’s just that they are in no hurry.

It was in Baalbek where we had a superb meal, maybe the best of our trip at a tourist place in front of the ruins. It was Good Friday and as we were served dinner outside a procession of Roman soldiers came down the street whipping a guy dressed as Christ carrying a cross. True dinner theater. We ate with the troubled son of the owner. He was about 22 and with impeccable English told how he crashed his car and got busted for driving on drugs but his father paid the cops and got him off.

He was dressed as a hip-hop American but he was local lad in the middle of nowhere except his town happens to be the Hezbollah stronghold. At one point they took a few rockets in the village and the kid told us he took a handful of Xanex and ran through the streets yelling that life was a joke as they were under fire. He also informed us that Tom and Jerry cartoons are very popular in the Middle East. When I asked him why, he said that Hanna or was it Barbarra, the creators, was Lebanese. You really do see Tom and Jerry a lot on TV there and you can buy the comics in any small town. I looked them up: Irish and Italian. But hey, let them dream.

People advise you everywhere not to discuss religion and politics just before they lay into these issues. They are all experts but with very biased points of view. I am well versed on the Mexican-American War and the conquest of California and so I will stick to that. If you want my opinion on religion and politics in the Middle East I plead ignorance. I wish all sides peace and good health.

3 Responses to Beirut: The Paris of the Mediterranean?