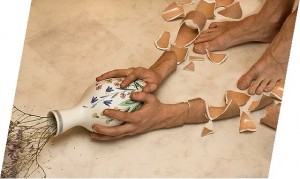 Nothing better than the metaphor coined by Italy’s Alessandro Manzoni to describe Don Abbondio’s predicament in The Bethroted, “I Promessi Sposi”, to illustrate Europe’s current untenable economic position. “A vessel of fragile earthenware, obliged to journey in company with many vessels of iron”, that is Don Abbondio in Manzoni’s epic, un vaso di terra cotta, costretto a viaggiare in compagnia di molti vasi di ferro. Fast-forward to today’s Europe, and position it in between the US and China, and tell me…what do you see?

The weak prelate facing bravacci’s aggressiveness doesn’t have many chances at becoming a leader, it doesn’t take much to imagine how he’s going to end up if he doesn’t watch out. The current European crisis shows that  without fiscal unification the Euro is an empty dress,  a currency with not roots that can be easily brought down by a negative credit rating on one of its smallest economies.

Now, can you imagine the dollar falling at a 4 years low because Alabama cannot repay the interest on the bonds it issued to cover its debt? Well, you’ll say, the US is a federation, Alabama is just but one of its many states, it is the fiscal solvency of the nation that sets the value of the dollar not that of its states. And that is precisely the point. Without full unification the future for Europe looks very, but very shaky. Just about like Don Abbondio, Europe is  a vase of clay traveling among two–the US and China–made of titanium.

When his editors at the time asked during an editorial meeting if anybody knew anything about the economy he said yes, but he meant to say that to survive he didn’t need much. You see it was one of those artsy copy offices, full of practitioners of experimental arts; dreamers who breathed big ideas, had high minded ideals and lived on nothing else but sandwiches and cigarettes. Now things are different though. To live and work in Baghdad By the Bay one needs serious money, and he says, he too now understands the real Economy.
Read More Share
What’s it Worth to You?
Saturday Night At a Fancy Accra Hotel Restaurant