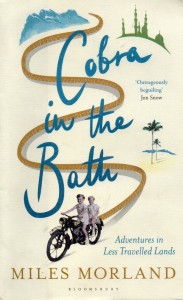 Cobra in the Bath – Adventures in Less Travelled Lands, readers will find, is many things but what it is not however is your everyday travelogue.  Au contraire, this here is an engaging chronicle of a near-seven decade expedition–one that has an uncanny knack of catapulting headlong into history-shaping geographies across several continents. It revs up in an India on the cusp of her freedom, and then yaws along to Mossadegh-era Iran after hovering momentarily over an exhausted post-war England. It is found idling on pristine Greek beaches–celebrating surviving that most terrifying of British institutions, boarding school, and Oxford–before eventually parking itself firmly in financial adventuring.

Morland’s early travels were a consequence of his father, a British naval commander, being posted in India. In fact, it was in the suffocating heat of a Delhi afternoon that he chanced upon the eponymous cobra in the bath at age four. Later, subsequent to the divorce of his parents, he accompanies his mother and stepfather (s) to Tehran where they were gainfully employed; the first by a fast diminishing British Empire, the second as Italy’s Ambassador. Given he was barely seven years at the time the author summons an elephantine memory to describe this phase of his life with incredible intensity–his first flight, witnessing Shi’ite ceremonies, setting the garden afire, surviving a riot.

Adulthood was defined by aimless days as a mini-bus driver in Greece followed by a brief stint on Fleet Street where he turned down a column to review corporate companies as his ‘ignorance of matters financial was total’. Only to land a job at John Govett despite having no idea what the difference between a stock and bond was. ‘They sounded boring too, and I did not know what an investment analyst was either…’ This boredom, as it turns out, lent itself to more than twenty years in matchless money-management in London and Wall Street, starting Blakeney Management that pioneered investments in hitherto untouched African markets, co-founding Development Partners International, a core African PE firm, and setting up of the Miles Morland Foundation with a purpose to promote African writing.

The author’s career milestones were interposed by impetus outings, like chucking up his job at First Boston in 1989 to explore France, a pied, with wife Guislane. That though is another story, The Man Who Broke Out of the Bank. While business interests found Morland testing waters at the Cairo Stock Exchange ‘a grand circular marble hall with ornate pillars in which sat three old men wearing fezzes, sipping Arabic coffee and dreaming of 1955’, similarly at Accra, Casablanca, Nairobi, Tunis, Amman, Bahrain, and Oman, he wilfully hops onto a train at London to witness history in the making in a crumbling East Europe. A riot here and a demonstration there later, his arrival in Bucharest coincides with Ceausescu’s orders to seal borders and he is turned back at gunpoint. He would return though, at age 47, after he decides to buy himself a motorbike ‘to celebrate his menopause’! This acquisition uncovered the latent biker in him and led to many momentous excursions across Europe, India (closest to assisted suicide is how he describes it), South America to partly retrace Che Guevara’s treads, and finally Japan where he is ambushed by a typhoon.

That an endless career in investment banking didn’t cost Miles Morland his humour, or joie de vivre, is most evident, not just in his witty story-telling but also in the spontaneity he summons at life’s many crossroads. Employing vividly recollected anecdotes as a device to take his narration forward, the author recounts his unconventional life–loves and losses included–in a disarmingly self-deprecatory and candid manner. As a result of which you are willing to overlook the many meticulously detailed pages he devotes to his love for machines (ships, planes, cars, trains, and bikes), the boat races at Oxford, and those dedicated to his irrefutably brilliant profession. In all, Cobra in the Bath is a riveting memoir of, by, a man who has continuously lived life to its optimum, on his own terms. Reading it will be time well invested.

When she is not travelling, she is writing about it. Over the past decade or so, she has created an impressive writing repertoire for herself: as a columnist with Hindustan Times, as a book reviewer for The Tribune and as a contributor to travel magazines in India and overseas. Her work-in-progress, the documenting of colonial heritage along the Old Hindustan-Tibet Road, is an outcome of her long-standing romance with the Himalayas.
Read More Share
South Dakota and Minnesota in Winter
Wellness Travel: Obsessed With Olives in Italy