One of the things we love about traveling is seeing how people in other countries do things differently or how things function differently. We love to check out livability of a city. Of course that is our own opinion and certain things are important to us.

Barcelona, is pretty livable, to us. First of all it is on the Mediterranean, second, I love the open and kind Spanish culture. Then there are things like, public transportation, which we loved and used everyday. They have a fantastic underground. It pedestrian friendly, and many more things. Here are a few.

The courtyards, they are everywhere, you walk a little bit and suddenly you are in a big open space where people are sitting outdoors at cafe tables, socializing, children are running around, bicyclists riding through. This is so appealing to us and somehow we did not take a photo of one..

Now this may seem funny, and well, it is, but one of the things we noticed (and liked) in Barcelona were the garbage bins. They were so cool! First of all they were plentiful, neat, clean, non-stinky (in 90 + humid weather), they were double sided (which I love). You could add garbage from the street side from a big lid or from the sidewalk side, which had a foot peddle to open up the bin or a small (hand size) opening to put your rubbish in. Usually there were 3 bins, sometimes 5, like in the photo. 3 recycling bins, one for paper and plastic, one for glass, and one for compost and 2 for regular garbage. I just love this, it is practical, and it is environmentally friendly. And apparently it works, because there was not garbage anywhere! (We have since made it to France and this is not the case here.) 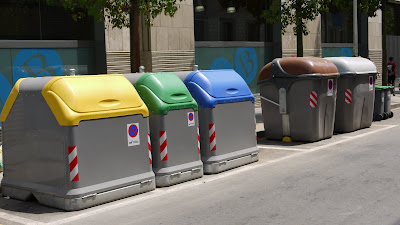 The other thing we loved, was the bicycle sharing system, although it had a major flaw. We couldn’t use them. You need to be a resident and have an annual subscription to the program. Other than that, the city wide bicycle program is very cool. You can use the bikes all over the city, they are parked in several different places, they are equipped with a front rack, and lights. Plus they are red, which I like! 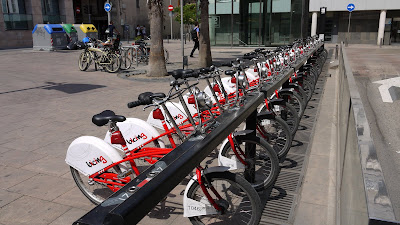 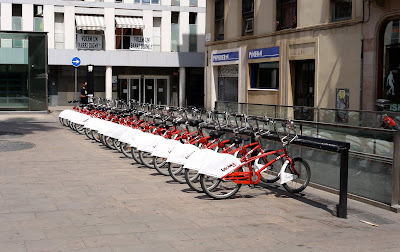 Overall, we both thought, we needed more time to get a feel for the energy of the city, but it ranks quite high on our list of livable places.

Samia Shalabi is a Seattle based artist & designer, yogi and traveler who has roots in the Middle-East, was raised in the middle-west and is drawn to India. She has a degree in geology, has traveled all over the world with a backpack, and believes in following her dreams. Samia does yoga most mornings, enjoys walks around Seattle, loves to laugh, and daydreams about where to travel next. She is working on a movie shoot in France.
Read More Share
Buenos Aires Accommodation: Living in San Telmo Argentina for $15 a day
Flying over the Moscow Beltway