The man sang passionately, his eyes shining like stars—fingers moving fast over the strings of the Rubab—the melodious singing and the sound of the Rubab touched my soul. He was singing a Pushto song and though I couldn’t understand a single word of the lyrics I stood frozen. I asked the Pathan standing beside me about the meaning. He explained -“Your eyes are intoxicated and it has made me drunk”. The shimmering face of the singer was deep drowned in the intoxication of melody—he wasn’t just singing.
Asfand Yaar Mohmand was performing at the ‘Lok Mela’ at Lok Virsa, Islamabad.
Meet Asfand Yaar Mohmand, 19 year old folk singer and Rubab player. He hails from the region which is currently one of the most volatile regions of Pakistan. Asfand Yaar Mohmand belongs to a far-flung area of Pandiala village, Bargay, Mohmmand Agency of federal administrative tribal areas (FATA) close to the Pak-Afghan border. 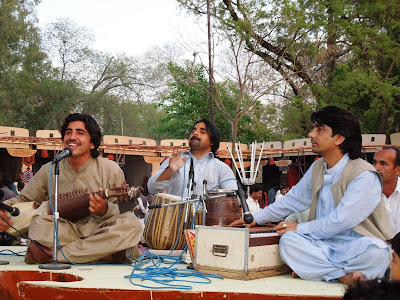 “I haven’t visited my hometown for more than ten years now, I am afraid of the Taliban. They don’t like these things” said Asfand, adding that he is passionate about music “I love singing and playing the Rubab”.
Asfand belongs to a family of laborers. One of his brothers is a furniture maker and the other sibling, who plays the Jhankaar, helps him in his music. In the beginning, his family wasn’t in favor of his decision of choosing singing and music as a career, but they couldn’t continue to resist as they saw his passion and craze. “My father was very angry with me, but not now, as he says he [Asfand] will not step back so let him carry on”.
“I love playing the Rubab, this is such a beautiful instrument. Its strings touch your soul, literally”. Beginning his journey singing Pushto and Urdu songs, Asfand has composed his own songs too and plans to release his album soon. He is also a fan of the renowned Pushto folk singer, Haroon Bacha.
He said that he has no idea when will he go back to his hometown. “Things are not good over there; they [Taliban] don’t allow music”. Back home, they could just about manage to arrange musical gatherings inside homes, without any sound system, commented Asfand. He told that many artists have shifted to Charsadda and other areas of Khyber-Pakhtoonkha and perusing their musical career from there for the same reason.
Asfand happens to have a musical band and is looking forward to a bright musical career. I hope his dreams come true!
Shiraz Hassan

He writes about culture and heritage of South Asia, particularly Pakistan. He advocates rich culture of this land and tries to explore facts. Recently he was given an award from the Federal Ministry of Population Welfare for his article on population crises. Writers Guild also awarded him a Medal of excellence for his work.
Read More Share
Going Texan Baby: All Things Tropicana in Galveston
How to Have Fun in Tokyo, Sydney & Oslo Without Breaking the Bank…