Nanjing: When I think about my reasons for brazenly rejecting an escort from Shanghai’s international airport to my new residence in Nanjing, they don’t seem so sound anymore. At least, that was the repentant notion that I adopted after spending the better part of 24 hours in airports, train stations, or some other vestibule that was designed to shuttle me toward my eventual terminus. Just like the wind; Traveling blows! 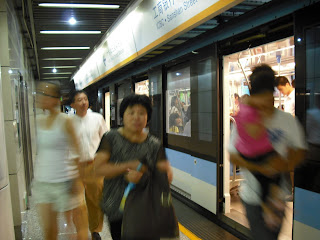 So, in the grand scheme of things, I’ve become more resigned to follow through on my goal of only taking 2 very selective holidays during this new chapter of China. I should save myself a bunch of grief and a little bit of money as well.

During one of my constant train rides from the last day or so, I was a passenger aboard a comprehensive and state of the art metro system. This metro system belonged to Shanghai, and brother it’s something. It’s clean; it’s timely; it’s quiet and comfortable. In short, it may very well be the antithesis of Chicago’s beleaguered public transit system. Not to downplay the inherent charm of my hometown’s bucket of bolts CTA, but it doesn’t really measure up to the standards being set by modern transit systems all across the world.

On Shanghai’s metro, I spotted a young Chinese man amidst the commuters. He was outfitted in (what I imagine to be) contemporary 21st century fashionable urban garb; and he also sported a tattoo on his left forearm.

What caught my eye in this particular young man’s appearance was not the style of his clothing, nor was it his physical demeanor (he seemed adequately sedate among the other doleful passengers). Rather what caused my eyes to linger on him a bit longer than the other myriad distractions was this forearm tattoo.

It was written in English. It read “Love You” and it was written in a looping, lazy script. The two words were so close together that it looked more like LoveYou—one word. I can’t fathom the intentions and motivations of this young man when he got that ink seared into the flesh of his lower left forearm. I couldn’t help but think of every hapless person that deems it necessary to get some obscure Chinese character emblazoned onto his or her hide. Most often these people make the choice based on aesthetics alone because, quite frankly, they have no idea what their choice in Chinese characters actually means.

Rory Keane is an American-born teacher and writer who has logged nearly two years in China, and is working on another year-long stint in the Middle Kingdom. He writes about travel, sociopolitical issues, health, entertainment, and culture, among other topics.
Read More Share
Dragonfly Island, or Liandao
Hegenburger: A Surprising Find in Oakland, CA