On our first day touring Tokyo, we decided to start the day at the Senso-ji shrine, but even just getting to the shrine proved to be difficult for us, since we kept getting distracted by everything else we were passing along the way. Tokyo is a riot of colors, excitement and impeccably dressed men and women! 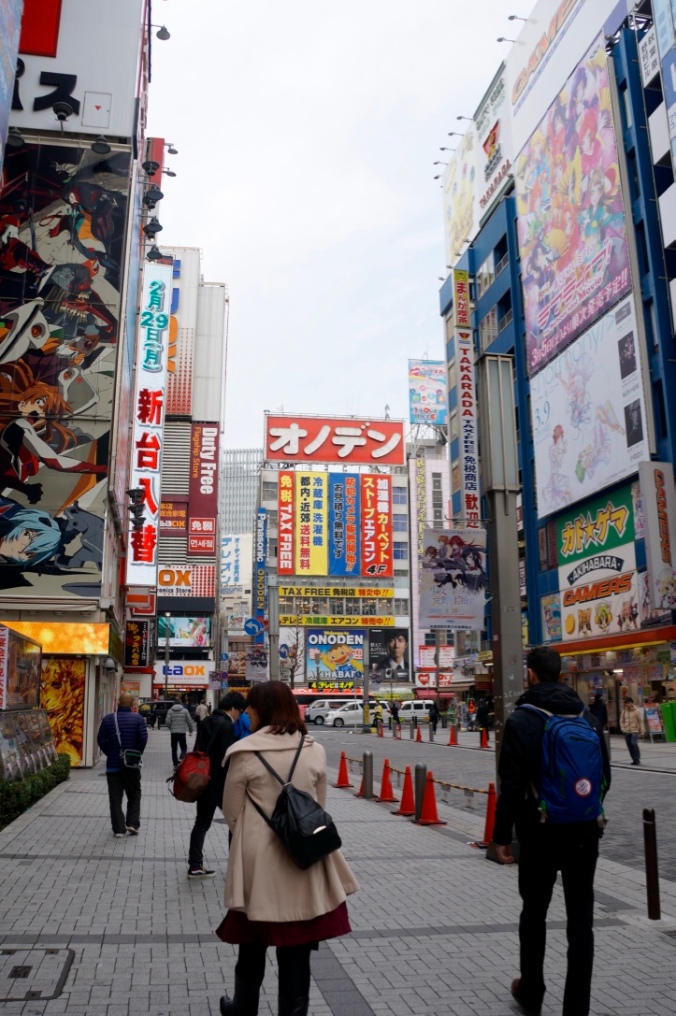 We explored the Akihabara area, a vicinity which is famous for its electronic shops where they also sell electronic toilet seats … how have I not talked about these yet!? The seats are actually  heated, open and close on their own and flush on their own.  Some have ocean sounds that come on when you sit … it’s like visiting a spa every time you pee!), and in recent years has become well-known for its collection of anime and manga paraphernalia, as well. 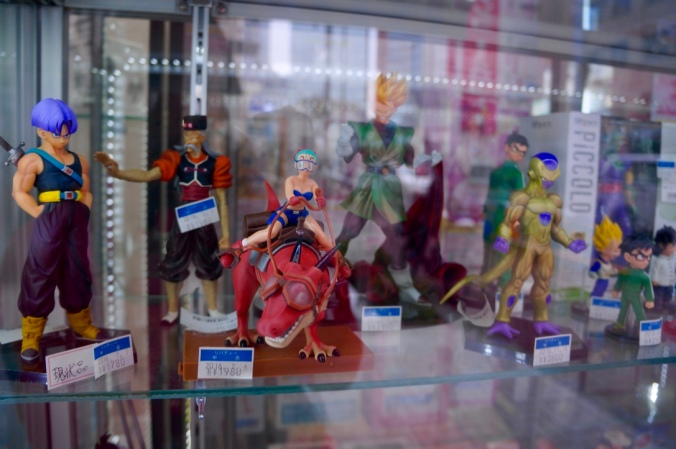 We also found ourselves meandering through the streets leading up to the Senso-ji temple, which was much more traditional Japan, as I had imagined it … 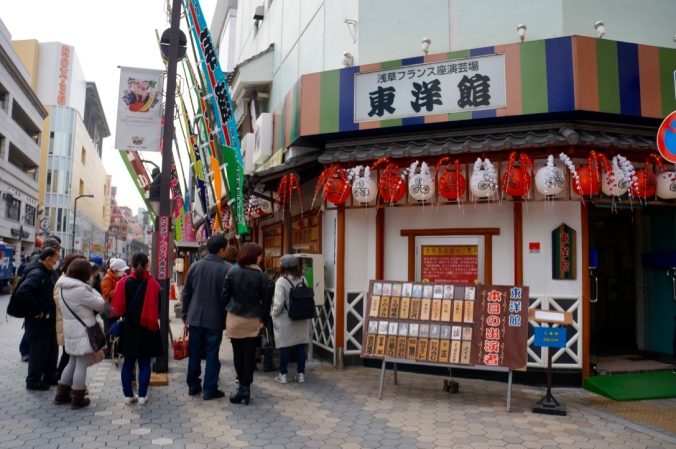 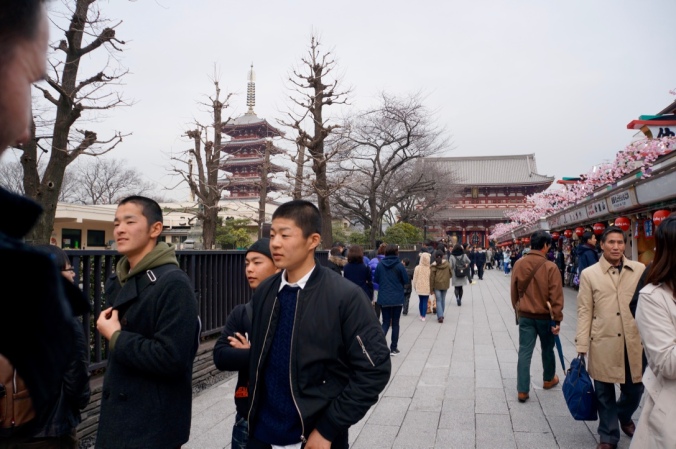 This was our first view coming up on the temple. You can just tell right away that it’s going to be pretty amazing, and the surrounding area — referred to as Nakamise-dori — has streets filled with shopping for anything your little heart might desire, from food and trinkets to clothing and so much more.

Senso-ji, in all her splendor.

Senso-ji is known to be Tokyo’s oldest temple, and its referred by to locals as the temple of the Asakusa Kannon. Even though the temple receives 30 million visitors every year, it is still an important center of worship. There’s a great history of the temple and surrounding area here. 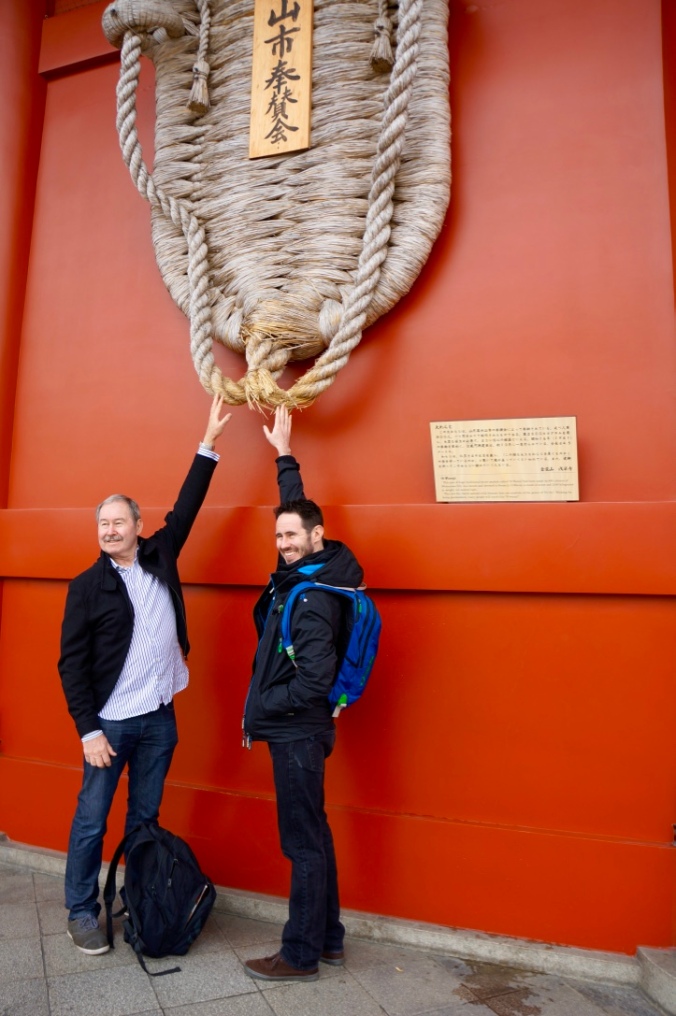 100 yen (placed in an honour box) will get you an omikuji, or a fortune written on a small piece of paper. If your fortune is bad, tradition would have you tie the paper on a nearby string so the wind can disperse the bad luck. Above is the incense burner, which you’ll find in the temple forecourt. People come here to fan the smoke from the incense over themselves, believing it to have healing powers. 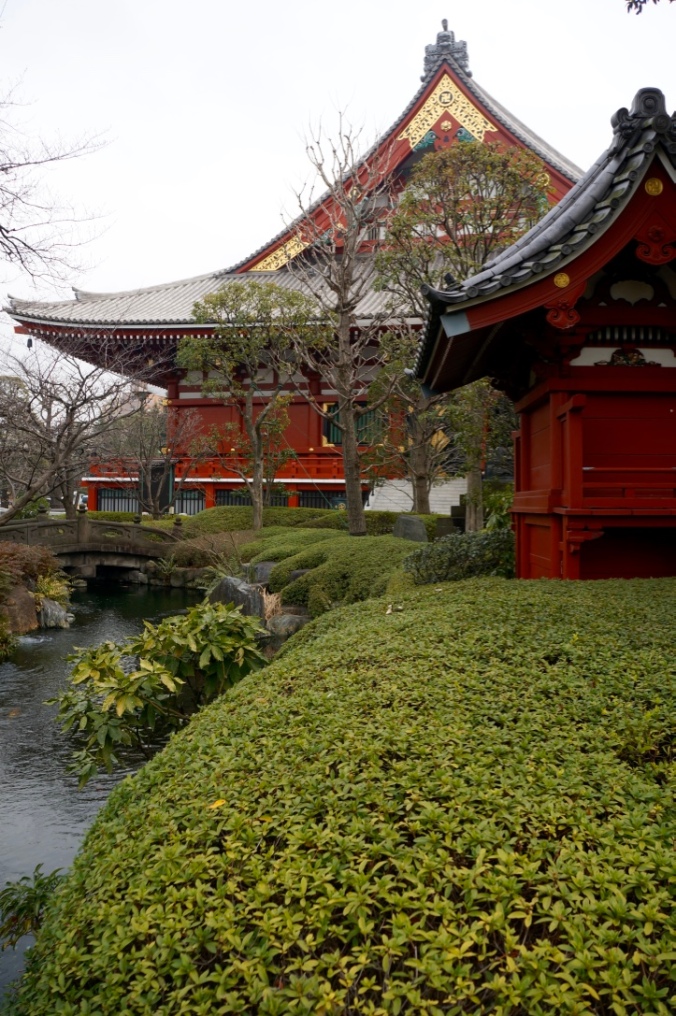 The area immediately surrounding the temple includes manicured gardens, Buddhist and other statues to pray at, and some other, smaller temple structures. The whole area is so alluring and you’ll feel like you never want to leave.

Of course leave you must, if you want to take in the rest of Tokyo! So after spending a couple hours at the temple and wandering around the surrounding streets, we decided to head off to check out the Roppongi Hills area of Tokyo, with its Tokyo City View, Mori Art Museum and Mohri Garden. Unfortunately by the time we got there the weather had turned rainy and cloudy, so the Tokyo City View didn’t seem like such a smart idea, and the Mohri Garden — which I had been pretty excited about based on information I’d read in my guide book — turned out to be pretty lame, as well. (Maybe it’s better in the spring when everything is blooming? Probably, I assume.) There are a ton of shops in this area, though, and it’s definitely one of the more affluent, contemporary sections of Tokyo, so it’s worth checking out. So we decided to grab a coffee (hot chocolate for me!) and rest our legs, and to come back the next day when the weather promised to be better to do the city view and the art museum.

In the evening we had plans to meet up with a friend of my sister’s who just recently moved to Japan with her husband who is in the Navy. Our original plan to see another temple didn’t seem like such a good one anymore because of the weather, so she recommended checking out Robot Restaurant, a restaurant in the Shinjuku neighborhood of Tokyo that she admitted she had never been to before, but that everyone had been recommending. Not quite sure what to expect (Vicky said “it’s mostly about the entertainment, it’s not really a restaurant!”), we were game for everything, so we hopped online, bought our tickets (they’re a bit pricey at about $50 per ticket — with a discount! — so I would definitely do your research before buying them to make sure this is the type of entertainment you’d be into) and were off!

So let me tell you about Robot Restaurant — it is quite a spectacle! There were little kids in our audience, so I would have been interested to gauge their reaction afterwards, but the basic gist of it is that this is not a restaurant (they serve popcorn, beer and some other goodies for an additional fee), and it’s really just a bright, loud, crazy, kitschy show of shorts, put on by both elaborately dressed actors and, ahem, robots. I think there was a plot line (good vs. evil, big scary robot wants to destroy pretty, blossoming world, people who live in pretty world fight back and win? Maybe?), but really, it’s not about the plot line, either. It’s all about the theatrics, the costumes … and the robots, of course! It actually turned out to be a lot of fun, but it’s probably not for everyone, so like I said, I’d do a little research before buying those tickets!

If you do buy the tickets, though, here’s a bit of what you can expect … 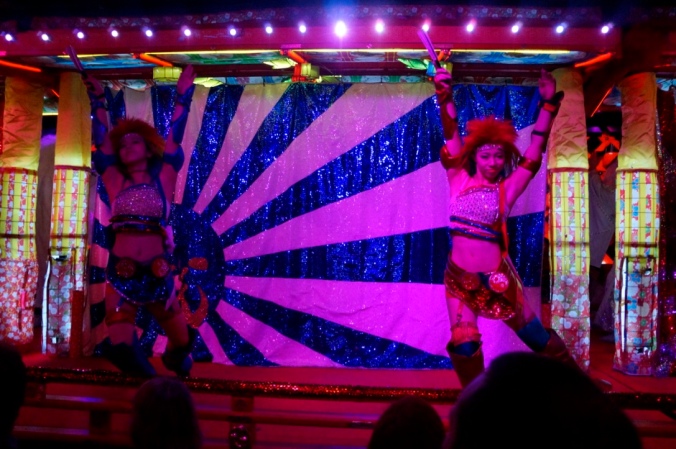 Cheryl was born in Nuremberg, Germany and grew up moving around every few years as an Army brat. The urge to travel has been with her her whole life. While she calls New York City home, Cheryl makes it a priority to travel as much as possible throughout the year. Some of her favorite places include Iceland, the Great Barrier Beef, Cabo, Rome, Calabria and Munich, although she hopes to never stop exploring. Cheryl blogs about her travel adventures (and what's happening in and around New York City) at Weary Wanderer.
Read More Share
5 Ways To Get Your Wellness On In Aruba
How About a Tea Ceremony in the Heart of Kyoto?