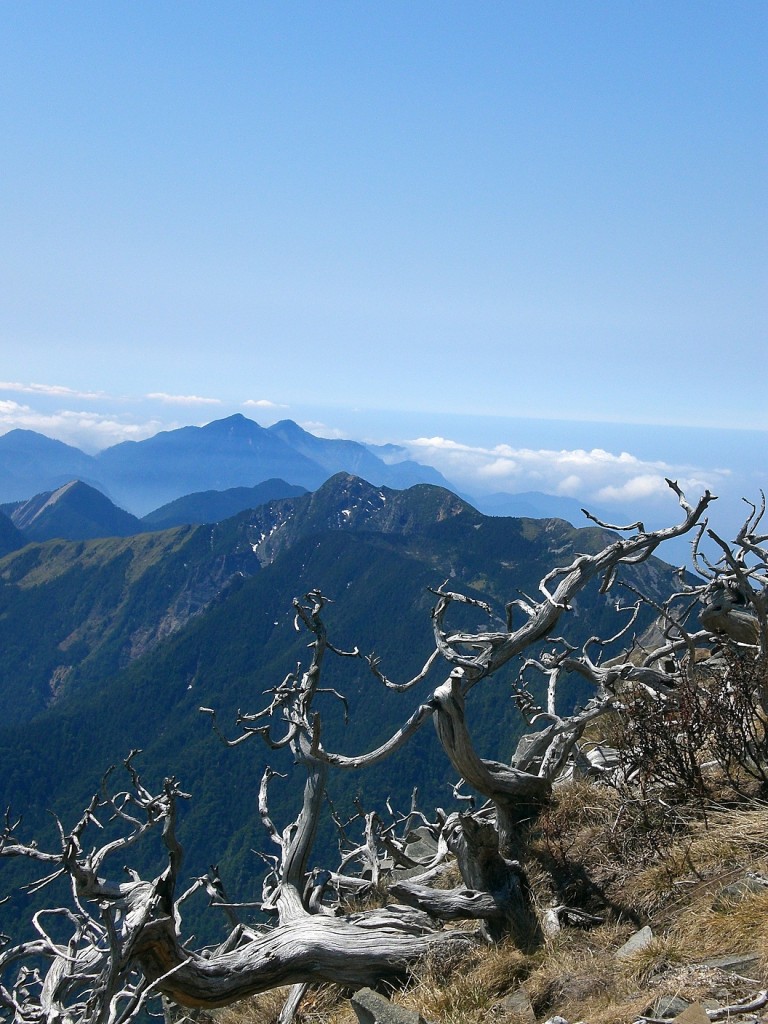 Snow, the weather report said. The faces in the van were a mix of startled excitement, and worry. We hadn’t been expecting snow on the mountain at this time of year, and didn’t have the equipment for it.

Snow Mountain rises to an altitude of 3,886m (12,749ft), making it Taiwan’s second-highest mountain. Well-traveled, popular trails lead to the top, but it’s still a fairly challenging, multi-day trip to reach the peak. For anyone interested in hiking, it’s a destination that can’t be missed.  I had been wanting to climb Snow Mountain since before arriving in Taiwan, and now I was finally on my way there.

As our van weaved its way southward from Taipei towards Shei-Pa National Park, we wondered: Would we go all the way to Snow Mountain only to have to turn back before reaching the peak?

We reached Wuling farm, at the base of Snow Mountain, around dusk. It was a short hike to the first cabin, Qika. With the moon nearly full, we soon realized that our headlamps and flashlights were actually more of a hindrance than a help. Within an hour, we’d made our way through the eerily beautiful, moonlit forest, and were settling in for the night.

The next day’s hike took us from Qika cabin to the East Peak, and finally, to 369 cabin.  With our heavy packs and all of our food, it made for an exhausting day!  From the East Peak, we could see 369 cabin, and the snow  up on the main peak. 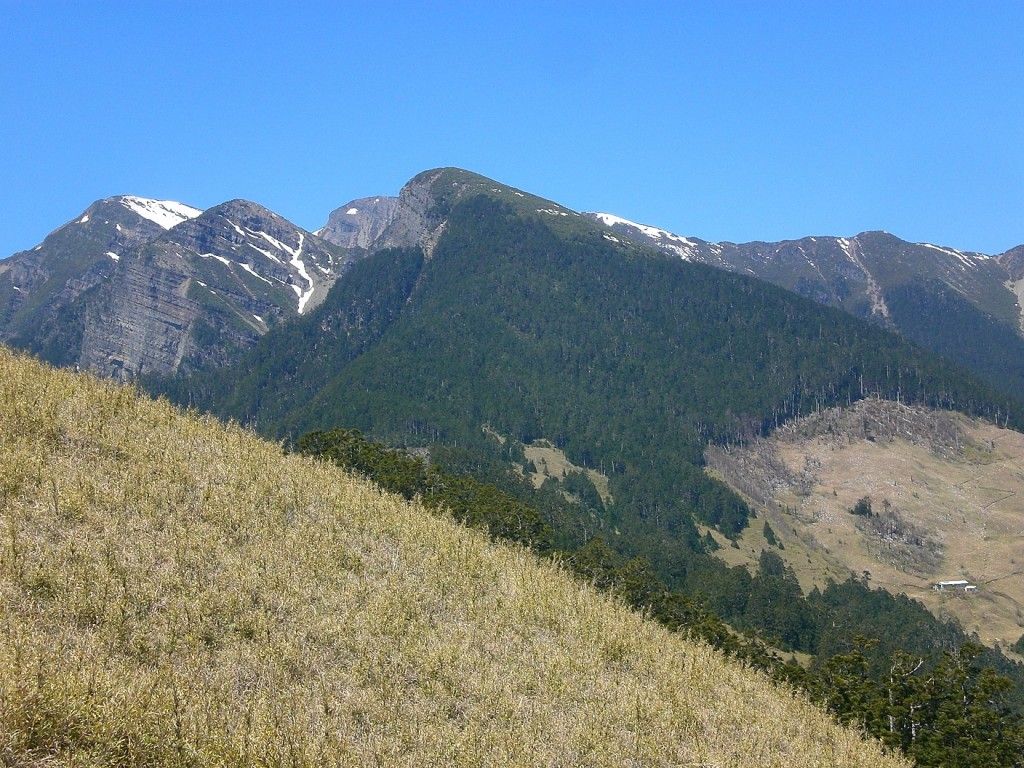 At the cabin, we talked with other hikers, our guides and the rangers.  It wasn’t looking promising. Everyone seemed under the impression that without ice axes and crampons, getting to the peak would be impossible. I went to bed that night feeling stubbornly hopeful, but bracing for disappointment. 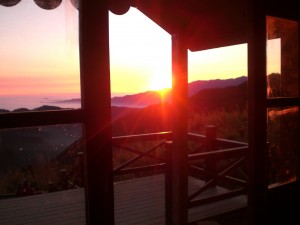 Our itinerary called for an early start the next morning—4am. The last thing I felt like doing after having finally drifted off to sleep was dragging myself out into the freezing cold. But the sight that greeted me outside of 369 cabin made me glad that I did. The cloud cover lay below us, with the peaks of the mountains rising above it like islands out of the ocean. The rising sun painted the sky red, and turned the mountains into black silhouettes. Even if we didn’t make it to the peak, I thought, the whole trip would be worth it just for that sunrise.

The day’s hike took us through a gorgeous alpine forest—a strange sight on the tropical island of Taiwan! As we worked our way upwards, the patches of ice were becoming more and more frequent, and in some spots, were dangerous enough that we had to detour off of the trail. The guides debated turning back. I wasn’t the only one who was starting to feel hopeful that we might actually reach the peak, though, and we pressed onwards.

Finally, we came to a small clearing, just below the final leg of the hike up to the peak. This was it, our guides told us. We were just a few hundred meters shy of the peak, but it was all snow and ice from here up, and we couldn’t go without snow shoes.

Nearby, we found an open field with a fresh coating of snow. If we couldn’t reach the peak, we could at least take advantage of a rare chance to play in the snow in Taiwan.

Although we’d nearly given up hope of getting to the top, a couple of us decided to check out the conditions on the peak ourselves. From where we were, it seemed that it would only be a short climb up to the top of a little hill. Once there, we thought, we’d have a clear view of the basin, and the trail leading through it up to the peak.

As we got higher and higher, it started to become clear that our perception had been a bit off. The snow quickly gave way to loose rock, which made for a particularly daunting scramble up the hill, and what had seemed like low weeds turned out to be jagged patches of low-growing junipers and tightly-packed bushes. I felt like briar rabbit, climbing, scrabbling, clawing, pushing my way through increasingly nasty terrain.

Nevertheless, we’d gone far enough up the hill that it seemed pointless to turn back. And we’d been right: we could see the conditions at the peak. It didn’t look so bad. A well-worn trail crossed the snow, with a steady two-way traffic of a few dozen other hikers. From where we were, all we had to do was cut straight over through the snow to intersect the trail, then follow it up.

We debated. After a few minutes, we reached a consensus: “Let’s do it.” The snow was deep, but not too icy, and soon we were above the worst of it. Bony-white high-altitude junipers surrounded the final few meters of the trail, and finally, we were there! 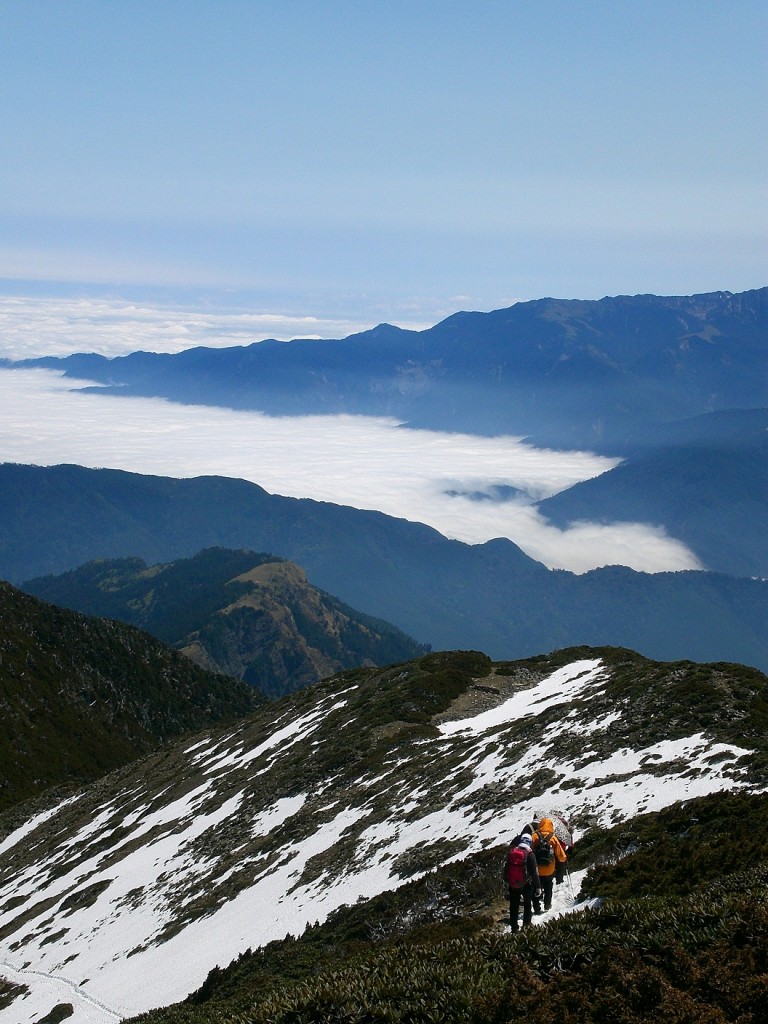 I was slightly lightheaded from the altitude, but elated that we’d made it to the peak. In the end, the rest of our group borrowed some snow equipment from other hikers. We waited for them back in the clearing, and started boiling some snow to cook lunch before the hike back down to the cabin.

After another night in 369 cabin, celebrating our unconventional trek to the summit, we made our way back down to Wuling farm, then off towards Taipei for dinner.

All-in-all, I can’t imagine a more perfect trip. We had clear skies and sun through most of the hike. Plus, the snow, and the fact that just about everyone we talked to told us we couldn’t make it to the peak, turned it into much more of an adventure and a challenge than it would have been if things had gone according to plan.  I would highly recommend a trip to Snow Mountain for anyone who enjoys hiking! 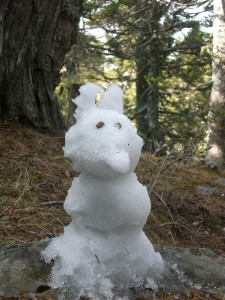 A traveling Motorbike Journalist, Dave has a passion for the Great Outdoors, motorbike camping, finding new trails, as well as discovering the Great Indoors, in the form of Urban Exploration or URBEX.

This has led to many exciting experiences, cultural exchanges and interesting situations over the years, as Europe is littered with post-war, post-industrial, desolate, abandoned structures and cultural sites, usually far off the beaten track. Originally from Dublin, Ireland, Dave has spent the last 15 years in Denmark, which he uses as a base from which to explore the rest of Europe by motorbike, both onroad and offroad.

One of the founding partners of Motorbike Europe, with nearly 20 years experience in graphic production, over 12 years in webdesign and development, including 3 years in the design of floating structures and villages, Dave currently runs the website aka www.motorbikeeurope.com, where he covers the areas of Webdesigner, Road Writer, Photographer, Content Manager, Social Media Manager, manic networker, motorblogger, and handles any other interesting digital possibilities that might crop up.
Read More Share
Caimen Ecological Refuge: Discovering & Finding Jaguars
Santiago, Chile’s Simple Guidelines To Get You Around The City