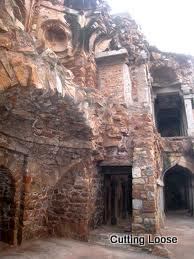 Right about this time of the year, my taste-buds start getting purposeful and I know it’s time to head to the National Capital for appeasement. Innumerable edible reasons await us but the one that has off-late popped into my head is dished out by an unpretentious little eatery called Gunpowder in the sprawling Hauz Khas Village.

It was a fine spring evening when I made my first acquaintance with this establishment. As part of a carnivorous lot that wound its way through the labyrinthine alleys of the village, past charming stores peddling kitsch and finally up four flights of a narrow staircase. That we were a large group disqualified us for the best table: a two-seater on the balcony peering down onto the mossy kund and its green surroundings from a lofty perch. 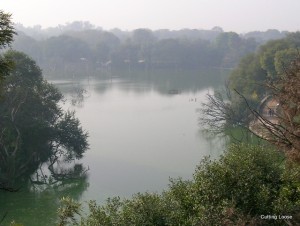 turned-chef owner and another pair of helping hands that fashion the superb home-cooked flavours. Their relaxed pace and the come-as-you-are ambience suggests you could be at a friend’s place. The limited-item menu (read printed A4 sheets), dependant on availability of fresh ingredients, could change daily so you may not want to play favourites. Subsequent visits taught me well. The one time, they were out of coffee, another, the prawns and once most disappointingly their tuna curry. 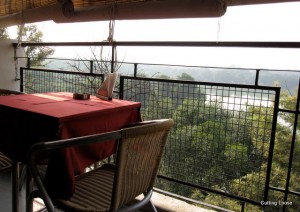 Interestingly, we were introduced to Gunpowder by a friend who swears by their avial and kaddu preparation. I must grudgingly confess he has plenty reason even though that is pretty much the extent of their vegetarian offering. But what really does it for me is their pork curry cooked Coorgi style and accompanied by Malabar parotha. It really isn’t a curry but thick gravy instead, just barely coating the meat in a rich spicy masala. Another finger-licking (literally) item is the kothuparotta, a coarsely shredded parantha topped with mutton or chicken, impossible to fork or spoon into your mouth. And then, and then, their heavenly coffee to complement a truly delicious meal.

However, just in case you are inspired by my drooling-in-print, you must remember to 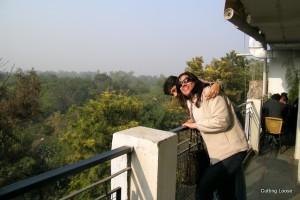 make reservations. Else you will be dejected at being turned away for lack of food, even if you do find a table, as they tend to run out of their most popular items by about 3pm. Take it from someone who has experienced it firsthand. Last winter my sister Nikuji, Mini and I killed time, for a table to come available, by posing for pictures even while our hunger grew unbearable! Be warned…

When she is not travelling, she is writing about it. Over the past decade or so, she has created an impressive writing repertoire for herself: as a columnist with Hindustan Times, as a book reviewer for The Tribune and as a contributor to travel magazines in India and overseas. Her work-in-progress, the documenting of colonial heritage along the Old Hindustan-Tibet Road, is an outcome of her long-standing romance with the Himalayas.
Read More Share
Celebrating the European Capital of Culture 2010
Titty Tea: More Than Just Tea

One Response to Gunpowder in the Sprawling Hauz Khas Village