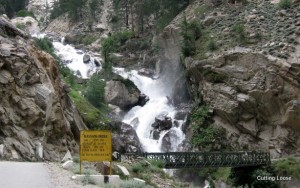 Earlier this year, I made a hectic sprint to Kinnaur to scrutinize a route to the Indo-Tibetan border in preparation for a longer, more arduous trip later.

Tired and weary, after three days of bouncing along non-existent roads, over roaring waterfalls, and through fearsome khuds carved out by an angry Sutlej, a friend and I stopped for a much-needed cup of tea at the Jangi rest house. 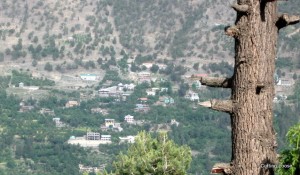 angular folds. One such hamlet faced us directly across the Sutlej, Moorang: the name indicating a place where three khuds meet.

Interestingly, it was also the place where the friend accompanying me had spent some of his early childhood. He tried pointing out familiar landmarks from afar but to me each distant dot resembled another.

The only distinct feature was a mud structure crowning a rocky hilltop in the foreground. Reaching towards the sky, it was rectangular in shape and of indeterminate architectural style and age.

Silhouetted against snowy peaks and the sky, it had me intrigued. My friend, an expert on the region in his own right, explained that it was said to be a fort dating back to the Pandavas.

It certainly looked antediluvian. But then it is common practice amongst locals to connect

all things ancient to the Mahabharat. Including the practice of polyandry, still prevalent amongst the tribal women of Kinnaur, who believe the system was bestowed sanctity by the polyandrous Draupadi. She and her husbands reportedly stayed here during their exile.

On a sudden whim, we decided to drive across to Moorang, one of us goaded by nostalgia and the other sheer curiosity. It entailed driving through an eerie stretch called Kiran khud: cold, stony, hostile with nary a sign of habitation and strangely silent.

Save for the echoes of the Sutlej furiously slamming rocky sides many hundred feet below us as we raced against daylight. 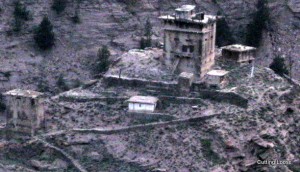 wellbeing of Himachali folk. They were partly answered.

We arrived safely but too late to walk up to the fort for a peek inside. I did, however, get a chance to capture a closer glimpse of the fort even as swiftly fading light played spoilsport. 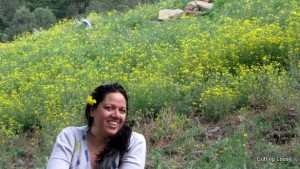 PS: The real reason we got delayed getting there? My childish desire to take goofy pictures in a  sunny field of wild cumin!

When she is not travelling, she is writing about it. Over the past decade or so, she has created an impressive writing repertoire for herself: as a columnist with Hindustan Times, as a book reviewer for The Tribune and as a contributor to travel magazines in India and overseas. Her work-in-progress, the documenting of colonial heritage along the Old Hindustan-Tibet Road, is an outcome of her long-standing romance with the Himalayas.
Read More Share
Chatting With Jessie Voigts of Wandering Educators
Artisan Nature Uses 33 Essential Oils In Their Juice